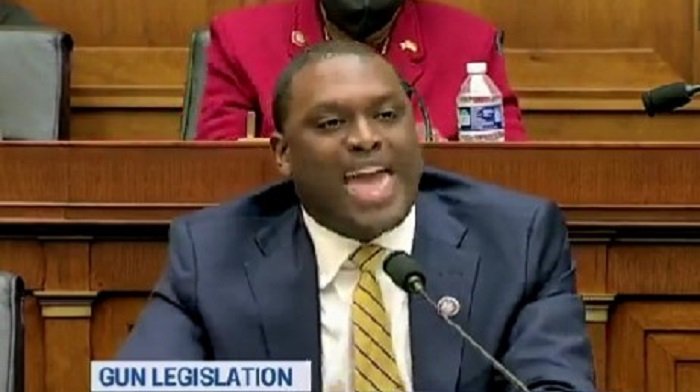 Jones made the comments during a House Judiciary Committee markup of the so-called Protecting Our Kids Act.

Among the provisions included in the bill are raising the age to purchase semi-automatic rifles from 18 to 21, banning standard capacity magazines, and a crackdown on “ghost guns.”

Jones defiantly told his colleagues that Democrats would stop at nothing to get the legislation passed.

“You will not stop us from passing [gun control]. If the filibuster obstructs us, we will abolish it. If the Supreme Court objects, we will expand. We will not rest until we’ve taken weapons of war out of our communities.” pic.twitter.com/0x3t1aJXBn

Mondaire Jones Admits What Democrats Want to Do on Gun Control

“Enough of you telling us that school shootings are a fact of life when every other country like ours has virtually ended it. Enough of you blaming mental illness and then defunding mental health care in this country,” he said. “Enough of your thoughts and prayers.”

Jones proceeded to give the game away on what his party is willing to do to crush the Second Amendment right of law-abiding citizens.

“You will not stop us from advancing the Protecting Our Kids Act today,” he railed.

“If the filibuster obstructs us, we will abolish it. If the Supreme Court objects, we will expand it. And we will not rest until we have taken weapons of war out of circulation and our communities each and every day.”

Myopic and dangerous speech. They will just railroad the constitution and institutional norms to run their agenda through. Unreal.

Republicans quickly responded to Mondaire Jones’ threat to abolish the filibuster and pack the Supreme Court.

House Judiciary Committee ranking member Jim Jordan (R-OH) pointed out that the New York Representative’s comments are an admission Democrats have no desire to compromise and create meaningful bipartisan reforms.

“Now we know where they want to go. He just said it,” Jordan, said. “End the filibuster. Expand the court. Forget the Constitution. Now, we know.”

Representative Dan Bishop (R-NC) told Jones one alternative to the gun control push might be to stop trying to defund the police and handcuff them from doing their job.

“What are you willing to do to stop gun violence?” Jones asked.

Bishop replied, “I would not intimidate the police and tell them they should cease to exist!”

That’d be a good start. But Democrats view police as always guilty of their actions. Criminals, on the other hand, are never responsible for their actions. It’s the gun that pulled its own trigger, you see.

Incredible. Defund the police politicians have something to say about stopping violence. https://t.co/KP3t9eXa8j

Mondaire Jones has made no secret that he is hoping his Democrat colleagues in the Senate would abolish the filibuster and pack the Supreme Court. And when he doesn’t get his way, he goes full Squad on them.

In a speech on the House floor back in January, Jones labeled senators who voted against changing filibuster rules, including Democrats Kyrsten Sinema (AZ) and Joe Manchin (WV), as “white nationalists.”

Jones was part of a gaggle of Democrats who announced their intentions to pack the Supreme Court by adding four Justices which, conveniently enough, would give them a 7-6 advantage. Weird how the math works out, am I right?

This is who they are and this is what they mean to do to America: Democrats to propose legislation expanding the Supreme Courthttps://t.co/i66oP4sZTa

How bad is the court-packing idea?

So bad that President Biden, a man who, if there was ever an oatmeal shortage could locate a decent supply between his ears, called it a “bonehead” idea.

“It was a terrible, terrible mistake to make, and it put in question there for an entire decade the independence of THE most significant body… in this country.” pic.twitter.com/MEPu0fMRG4

That’s the level Rep. Jones is playing at right now – sounding like a verklempt Squad member during congressional hearings.

Jordan continued hammering away after Jones’ comment, suggesting Democrats’ true goal is to simply strip away the Second Amendment rights of the American people.

“Democrats blame guns. They criticize the NRA. They call Republicans names. But let’s be honest, they’ve told us what they want to do. Their real beef is with the Second Amendment,” Jordan continued.

“Their goal, plain and simple, is to get rid of the Second Amendment.”

That’s a goal they’ve had for decades now. It just so happens they now have the backdrop of a massacre of children to help them achieve that goal. And there’s no grave they’re not willing to dance on to get where they’re trying to go.