BREAKING NEWS
GMT+2 06:30
Home Politics Democrat Rep Admits What They Believe On Guns: ‘Spare Me the Bulls*** About Constitutional Rights’ 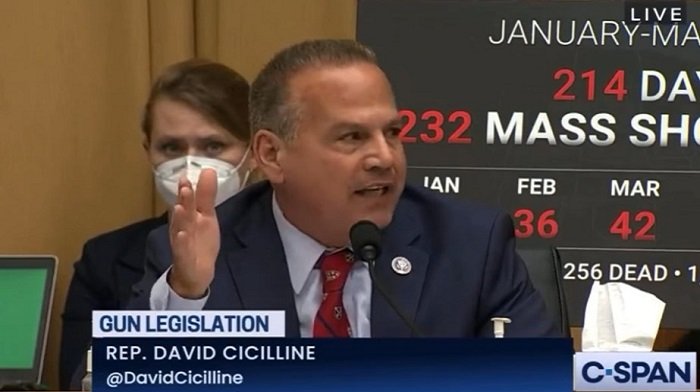 Democrat Rep Admits What They Believe On Guns: ‘Spare Me the Bulls*** About Constitutional Rights’

Democratic Representative David Cicilline sneered at “bulls*** about constitutional rights” during debate on the so-called Protecting Our Kids Act, a package of gun control laws that passed the House Thursday.

“If you back red flag laws as some reflexive response to some emotion that you have, you betray your voters,” Gaetz warned. “You are a traitor to the Constitution, the Second Amendment, the Fifth Amendment, you do nothing to make mass shootings less likely.”

“Red flag” laws allow authorities to confiscate firearms from individuals deemed a risk to themselves or others, without having been convicted of a crime, violating the right to due process.

Democrat Cicilline was honest in his response – admitting that the left-wing position has no consideration of the Constitution or rule of law:

“Spare me the bullshit about constitutional rights,” David Cicilline says to Matt Gaetz during hour nine of House Judiciary Committee meeting on guns package — in debate over red flag laws.

David Cicilline said the quiet part out loud in his response to Gaetz, admitting that gun grabbers are actively hostile to the Constitution.

“Spare me the bullshit about constitutional rights,” Cicilline angrily fired back.

Cicilline: You know who didn’t have constitutional right to life respected? The kids at Parkland and Sandy Hook and Uvalde… so spare me the bullshit pic.twitter.com/xji3Cv7lFr

Incidentally, Cicilline, who suddenly feigns concern about children and a ‘constitutional right to life’ when it serves his political purposes, has a 100% voting record on pro-abortion legislation according to NARAL Pro-Choice America.

“Spare me the bullshit about constitutional rights”

Please run on this platform in the midterms, Dems. That should play really well with the electorate. Especially in the wake of every illegal action taken by the government over the past two years in the name of “public safety”.

Earlier in the hearing, David Cicilline embarrassed himself as he was unable to point to “a single incident” in which a good guy with a gun stopped a bad guy with a gun.

He probably should have stopped after the first three words in that statement. There are a lot more than one.

During the Uvalde massacre, a border patrol agent took out the school shooter using a gun borrowed from his barber.

A gunman at the West Freeway Church of Christ in Dallas in 2019 was taken down in “seconds” by armed church security volunteers. In that case, a pair of gun laws had recently been passed allowing churches to develop, train, and plan for their own teams to provide security.

Those laws were in response to a 2017 mass shooting at a church in Sutherland Springs which was mercifully stopped by an armed neighbor.

Armed parishioners saved ‘untold number of lives.’ This law made it legal to have guns in church https://t.co/RgW7K1UrXK pic.twitter.com/ZQU1G9bDeT

Just last week an armed woman in West Virginia shot a man who opened fire on a crowd of about 40 people with a semi-automatic rifle.

Maybe if the media were honest, that heroic woman would have gotten nationwide coverage. But that wouldn’t fit the narrative.

Perhaps Democrats like David Cicilline should consider the West Freeway Church case rather than dismissing constitutional rights as bullshit.

Allow schools to develop, train, and plan for their own security teams.