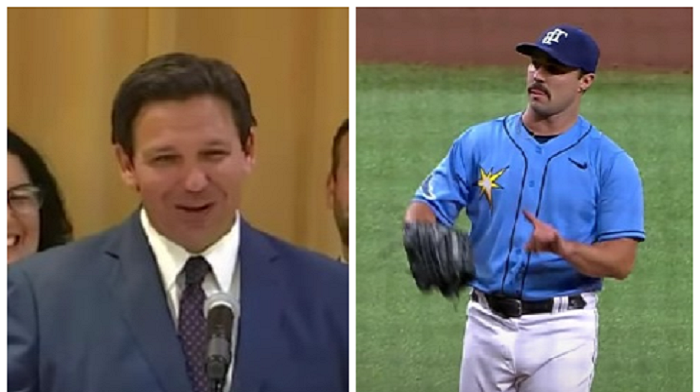 Florida Governor Ron DeSantis will reportedly veto a $35 million training complex for the Tampa Bay Rays following a stunt in which the team tweeted out anti-gun propaganda instead of game updates last week.

The Rays and the New York Yankees issued statements prior to their matchup last Thursday responding to mass shootings in Buffalo and Uvalde.

They also announced a $50,000 donation to the anti-gun organization Everytown For Gun Safety, a group that has used provably false statistics to bloviate on the dangers of guns in America.

Outkick reported that DeSantis plans to respond to the politicization by the sports organization with a massive veto.

Florida Politics reported in March that Pasco County was set to receive $35 million to start construction on a sports training complex.

The facility was to be used as a “sports training and youth tournament complex” legislators justified, but also “as a spring training center for the Tampa Bay Rays.”

Outkick states that the reported veto of the $35 million facility “is in response to the Rays politicizing recent shootings.”

They also note that this comes following a decision by the Florida governor to revoke Disney’s special tax and self-governing privileges after the company interjected in the mislabeled ‘Don’t Say Gay’ bill debate.

“And so in Florida, our policies got to be based on the best interest of Florida citizens, not on the musing of woke corporations,” DeSantis said back in March in responding to Disney’s opposition to the Parental Rights in Education bill.

The legislation prohibited teachers from discussing sexual orientation and gender identity for children in kindergarten through third grade.

First DeSantis takes on Disney and now he is after MLB. Dam I like this guy, wish he was Canadian.
DeSantis To Veto $35M Tampa Bay Rays Facility Over Team’s Anti-Gun Statement https://t.co/F687RqZEME

Perhaps Governor DeSantis noticed that since the Tampa Bay Rays have tens of thousands of dollars to throw around to anti-gun groups, perhaps they don’t really need taxpayer funds for their spring training facility.

Outkick writes that “Florida residents had called for DeSantis to veto the spending anyway, saying that Floridians’ tax dollars should not help fund a facility for a professional sports team.”

Our content will return to its usual focus tonight, but we continue to mourn. The tragedies of gun violence cannot continue. Please join us in having conversations about this in our homes, our neighborhoods and communities, and in taking action toward its end.

As for the $50,000 donation to Everytown for Gun Safety – the group has been caught and called out by even left-leaning fact-checkers for inflating their statistics.

For example, in 2018 the group had listed as school shootings such incidents as a window being broken with a pellet gun after hours, an accidental discharge, and a random person shooting themself in a parking lot of a school that had been shut down.

The Tampa Bay Rays are just another in a group of sports teams that seem to have forgotten that their lone purpose is to provide entertainment to people, not force-feed their fans garbage political information.

Remember when Major League Baseball stripped Atlanta of the All-Star Game in 2021 over a Georgia voting law that would supposedly “restrict voting access for people of color”?