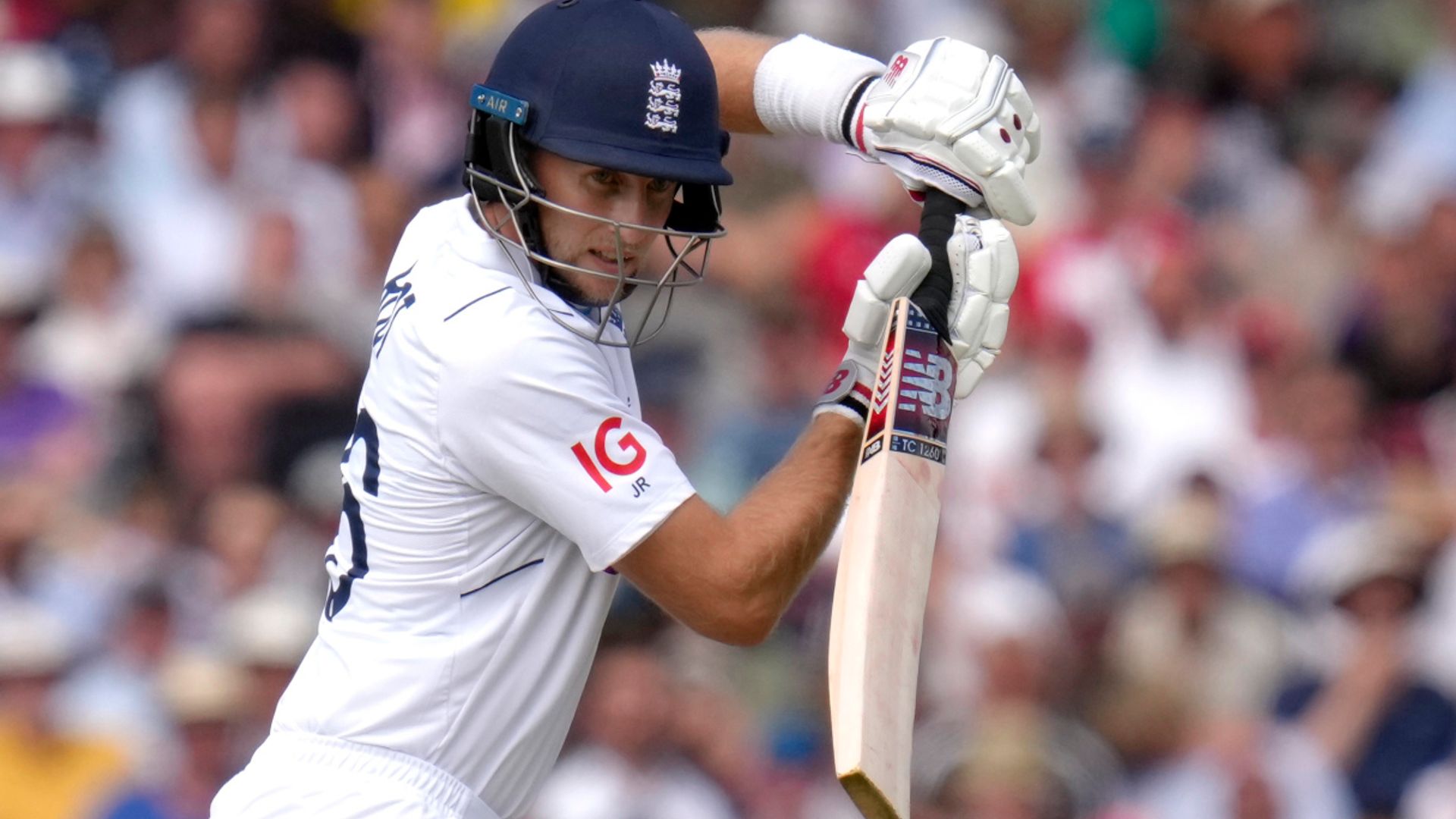 Joe Root (77no) takes England to within 61 runs of victory over New Zealand; former captain shares fifth-wicket stand of 90 with new skipper Ben Stokes (54) after Stokes reprieved by no-ball on one – watch day four of first Test from 10.15am, Sunday, on Sky Sports Cricket England’s victory hopes remain very much alive in the first LV= Insurance Test after Joe Root and Ben Stokes revived their side on day three of an absorbing Lord’s clash against New Zealand.

England are 216-5 in a chase of 277 and will need a further 61 runs on the fourth day to win Stokes’ first Test as captain and claim just a second victory in their last 18 matches in the longest format.

Former skipper Root (77no off 131 balls) is the key man, with Stokes (54 off 110) having departed in the final session after sharing a 90-run, fifth-wicket stand with Root to resuscitate England from a parlous position at 69-4.

Stokes thought he had been dismissed for one when he dragged a Colin de Grandhomme delivery onto his stumps – England were 76-4 at that stage – but he earned a reprieve with the New Zealand bowler having overstepped. Stokes was later dismissed by the impressive Kyle Jamieson (4-59) but Ben Foakes (9no off 48) stuck with Root through to stumps during an unbroken stand of 57 to set up a potentially thrilling Sunday morning.

England dragged themselves back into the game on Saturday morning by seizing six wickets for 34 runs – including three in as many balls during a thrilling Stuart Broad over – to dismiss New Zealand for 285 after the tourists had resumed on 236-4 with a healthy lead of 227.

It was very much advantage New Zealand, though, when Jamieson vaporised Alex Lees (20), Zak Crawley (9) and Jonny Bairstow, and Trent Boult (1-61) bowled a squared-up Ollie Pope (10) with a beauty.

Root and Stokes subsequently led England’s fightback but New Zealand will take confidence form the length of the hosts’ tail – Matthew Potts heading it at No 8 followed by Broad, James Anderson and Matt Parkinson.

Kane Williamson’s tourists were heavy favourites coming into day three, thanks to a then-unbroken stand of 180 between Daryl Mitchell (108 from 203 balls) and Tom Blundell (96 off 198) which had revived them from 59-4.

England needed a clatter of wickets and they duly came – after a 30-minute rain delay and Mitchell clinching his second Test century from 189 balls. 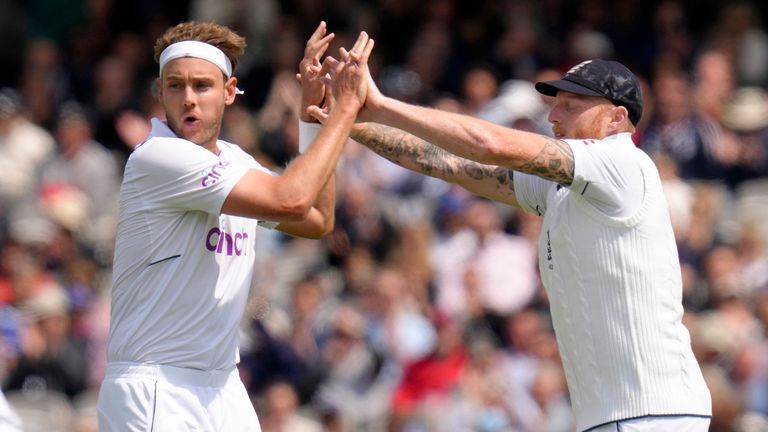 Broad was England’s catalyst with the ball, as he so often is, forcing Mitchell to snick behind to Foakes and triggering the drama of a team hat-trick.

Next delivery, De Grandhomme (0) was run out via a direct hit from Pope having dawdled out of his ground following an lbw appeal from Broad, while the ball after that, Broad smashed Jamieson’s off stump – New Zealand sinking from 251-4 to 251-7 in a flash.

Anderson denied Blundell a third Test ton by pinning the batter lbw; Potts snared his seventh wicket of a fine debut by trapping Ajaz Patel (4) leg before and Parkinson polished off the innings, claiming his maiden Test scalp as Root pouched Tim Southee (21) at slip. 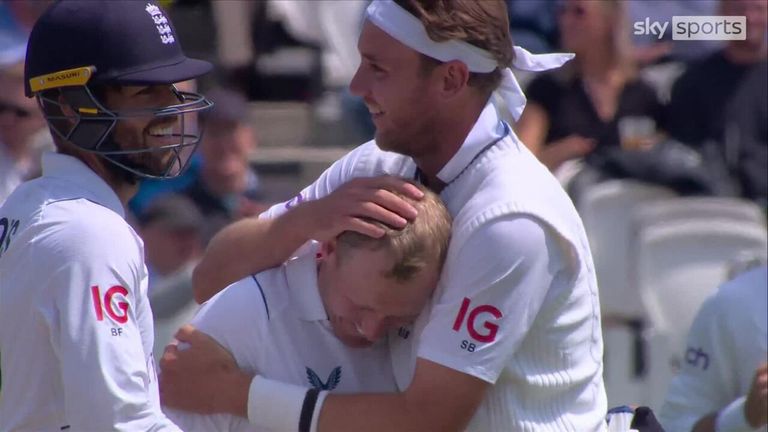 Top-order woes for England before Root and Stokes rally

Crawley and Lees guided England to 31-0 shortly before lunch – only for Lees to then opt for a costly leave and be bowled off stump by the impressive Jamieson.

Jamieson removed Crawley and Bairstow after the break, with the former edging a rising delivery to gully and the latter clipping a nip-backer onto his stumps having previously been set up by balls which held their line.

Bairstow had strode out with real intent, hitting three boundaries in a 14-run Boult over, shortly after Boult had splattered Pope’s stumps.

Stokes splattered his own stumps after advancing to De Grandhomme but was saved by the no-ball and the bowler’s day got even worse as he followed that aberration and an earlier golden duck by limping off the field.

Stokes soon launched Patel for six in the spinner’s first over of the match and added two more maximums during one Patel over in the final session shortly before clinching his 27th Test fifty with a four off Jamieson. 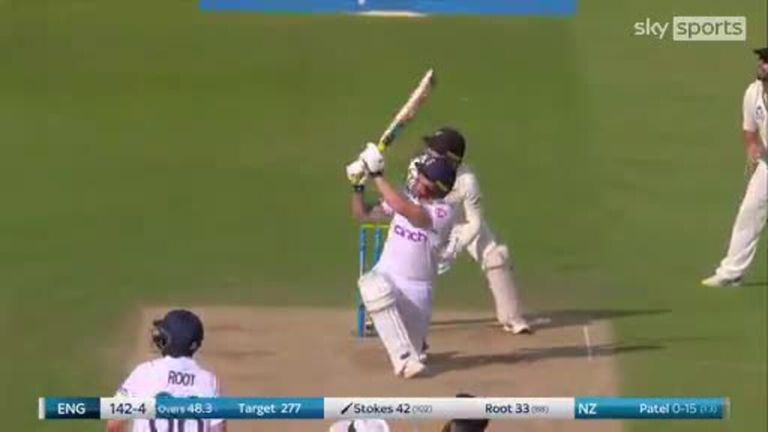 The bowler got his man five balls later, with Stokes caught behind by Blundell from the last delivery before drinks as he attempted an uppercut – New Zealand buoyant at that stage and England fans probably fearing the worst.

But Root remains – the milestone of a 54th Test fifty now secured, the prospect of a 26th Test ton and 10,000 Test runs to come, and batting England to victory at the start of their new era very much on his radar.

Stats of the day

23 – The number of runs Joe Root needs for a century and also to reach 10,000 runs in Test cricket 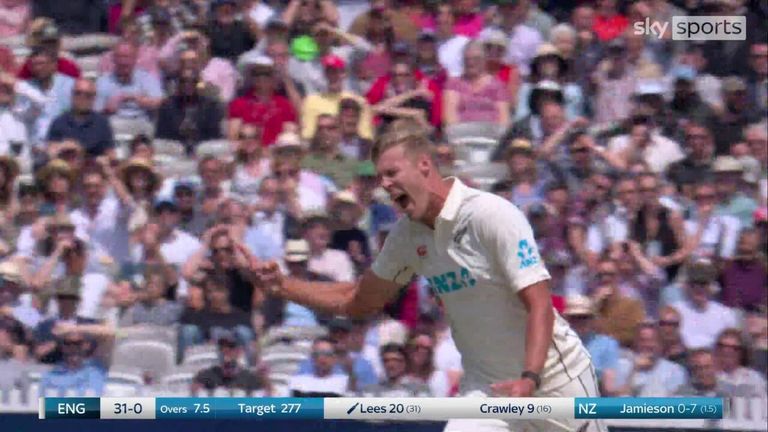 Watch day four of the first LV=Insurance Test between England and New Zealand, at Lord’s, live on Sky Sports Cricket and Sky Sports Main Event from 10.15am on Sunday.