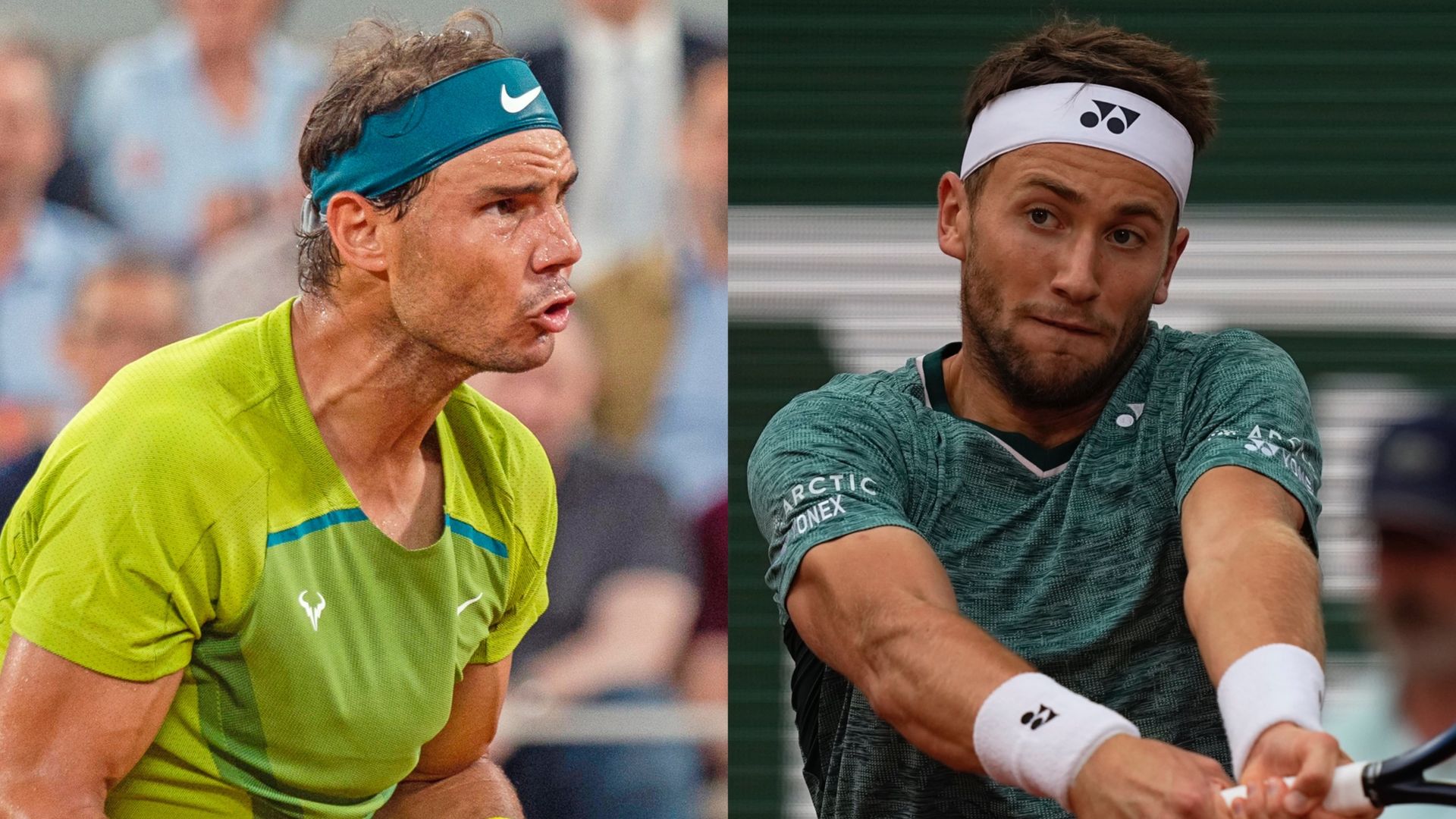 Rafael Nadal is aiming to secure a 14th French Open title on Sunday, when he takes on first-time Grand Slam finalist Casper Ruud.

With Ruud having trained at the Rafa Nadal Academy in Majorca since 2018, the contest firmly sits in the master against the apprentice category. The Norwegian has openly admitted that Nadal is his ‘idol’.

A victory in the Championship match would extend Nadal’s dominance at the clay-court major.

The 13 titles he has won at Roland Garros is the most by any man at a single Grand Slam event in history. It eclipses Novak Djokovic’s nine titles at the Australian Open and Roger Federer’s eight triumphs at the Wimbledon Championships.

Ruud is the first Scandinavian man to reach a Grand Slam final since Robin Soderling in 2010 and if the 23-year-old were to triumph, he would become the youngest Grand Slam men’s champion since 2009.

Nadal secured his place in the final following distressing scenes on Court Philippe-Chatrier on Friday.

After over three hours of tennis playing against Alexander Zverev, and with the contest poised at 7-6 (10-8) 6-6, Zverev suffered a serious ankle injury and was forced to retire from the match.

The German third seed had been pushing the 13-time French Open champion hard and really testing Nadal’s fitness and form.

“It had been a super tough match, being over three hours and we hadn’t even finished the second set,” Nadal said on court after Zverev’s injury and retirement.

“It’s one of the biggest challenges on the Tour today, beating him [Zverev], when he’s playing at this level.

“It’s difficult to say a lot in this situation. Of course, for me, everybody knows being in the final of Roland Garros again is a dream, without a doubt.

“But, at the same time, for it to finish that way and to see him like that, is very tough.”

Nadal came into this Grand Slam event with significant question marks next to his name, due to the chronic foot condition he is living with and how severely it impacted him in Rome.

During this major, he has made it clear that he does not know if any of these matches in Paris will be his last, such is his level of discomfort.

Despite this foot condition putting both a physical and mental burden on his shoulders, Nadal has performed with his trademark intensity and at a level few are able to match.

He has lost just three of the 20 sets he has played and when it comes to French Open finals, he holds a record of 13-0 and has not lost more than two sets in one.

Nadal’s tennis – from the back of the court and when attacking forwards – is imperious on the red dirt and his hunger to win makes him even more dangerous.

But, he will need to work hard against Ruud’s serve which has been working extremely well in Paris. Ruud has delivered 52 aces, in comparison to just 13 from Nadal.

If victorious, Rafael Nadal (36) would be oldest Roland Garros men’s champion. If Casper Ruud (23) wins, he would be the youngster Grand Slam men’s champion since 2009.

This Grand Slam final will not only be Ruud’s first, but it marks his first competitive meeting with Nadal.

“We have played some practice sets, and he has always pretty much beaten me,” Ruud, who is the eighth seed, admitted.

“There’s been some close sets, 7-6 7-5 but it always goes his favour. But it’s because we are playing in the academy, and I want to be nice to him!”

Ruud’s knowledge of Nadal’s career, and in particular his finals on clay at Roland Garros, is extensive.

“I probably watched all of them,” Ruud said. “I think I could probably tell you all the finals and who he has played and who he has beaten, because I watched them all on TV.

“It’s going be amazing to be there myself when you have seen players like Puerta, Federer, Djokovic, Thiem, all the guys who have played him in a final.

“So, to be a part of that group myself is something I can always brag about after my career.

“Hopefully I will, of course, give it a shot at the title, and it would be nicer to be able to brag about the title as well after my career.

“I will try to figure something else out other than in the practice, how to beat him. I will just enjoy the moment. This is a special occasion for both of us.”

Route to the final

Ruud has won seven tour-level titles on clay, but none above the ATP 250 level. Despite that, Nadal is wary on his opponent’s competency on the surface.

“For me, Casper is one of the candidates for winning in every clay-court event that he’s playing. He’s one of the clear favourites. He’s not a big surprise at all,” said Nadal.

Both men have spent a few minutes over 18 hours on court during the course of their campaigns at Roland Garros. Ruud holds a respectable 18-6 record in sets and Nadal has lost just three of his 20 sets.

Ruud has worked well behind his purposeful first serve and showed in his semi-final against Cilic that he can cope with a big occasion. However, taking on Nadal on Court Philippe-Chatrier in a French Open final, is an altogether different challenge.

Upsets are a wonderful part of sport, but if Nadal’s foot condition is managed as well as it has been so far, then it is very difficult to look past a 14th French Open title for the ‘King of Clay’.