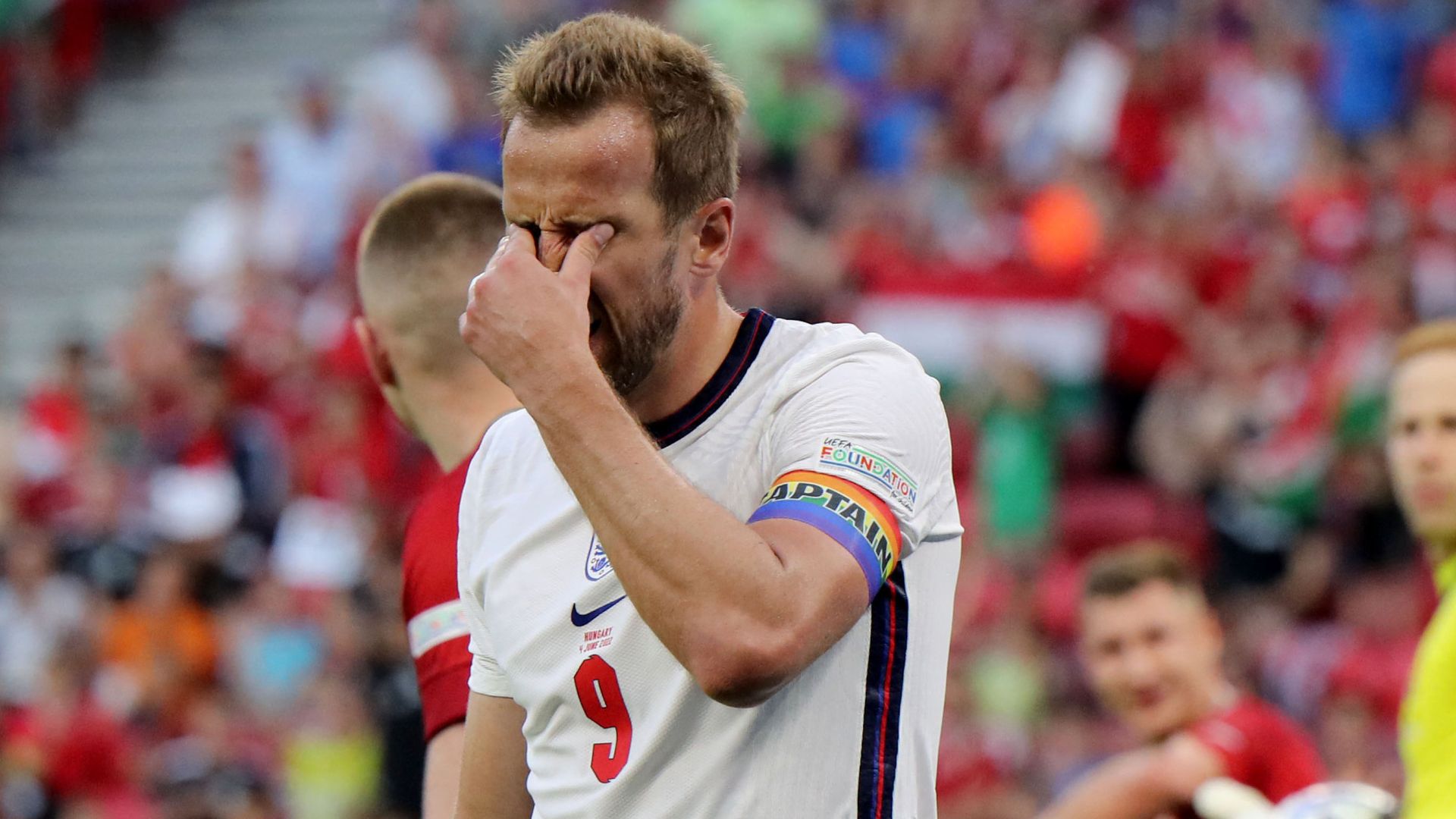 A lethargic England began their Nations League group with a first defeat to Hungary in 60 years as Dominik Szoboszlai’s contentious penalty earned a 1-0 win in Budapest.

The Three Lions looked uncomfortable throughout in a 3-4-3 formation, which included debutants James Justin and Jarrod Bowen, and at the end of a long domestic season fell to their first loss over 90 minutes since November 2020 through Szoboszlai’s spot-kick (66).

Hungary, whose fans had booed England taking the knee at kick-off despite the game being played ‘behind closed doors’, had already enjoyed the better of the chances before they scored. Conor Coady cleared an early Szoboszlai effort off the line, before Zsolt Nagy and Adam Szalai both went close to opening the scoring.

Justin was forced off by a calf injury at half-time and England continued to toil after the break, but were unfortunate to be penalised when substitute Reece James was adjudged to have fouled Nagy just inside the penalty area.

Hungary had earned a point in their World Cup qualification group at Wembley last year after taking the lead from the spot, but this time Szoboszlai’s emphatic penalty ensured all three at the Puskas Arena. And their win could have been even more emphatic had Andras Schafer finished off an open goal after Jordan Pickford had kept out another Szoboszlai shot.

The tests keep coming with Germany England’s next League A, Group Three opponents on Tuesday, while Hungary will look to make it five wins in six when they face European champions Italy.

Man of the match: Dominik Szoboszlai.

“We’ve got a massive game coming up on Tuesday,” England defender Conor Coady told Channel 4. “We need to look at this performance and learn from it very quickly.

“I thought we started off quite well. We need to tidy up and bounce back. We need to look at how we performed and how we move forward because these are big games for us.”

There were talking points throughout Gareth Southgate’s selection with Justin handed a debut at left wing-back, Jude Bellingham given only his fifth start in midfield and Bowen finally fit to make his England bow on the right of a front three.

Justin’s game lasted only 45 minutes as he failed to shake off an innocuous injury he suffered midway through the opening period, and he was partially culpable for the move which led to Szoboszlai’s early effort.

Bellingham’s midfield audition was equally unremarkable. His partnership with Declan Rice looked uncomfortable from the start in an unfamiliar pairing, and the duo failed to provide the protective screen England needed to stop Hungary’s diagonal balls out wide which troubled the Three Lions all evening.

The England boss reverted to the 3-4-3 formation he had often favoured at Euro 2020, with Bowen and Mason Mount starting either side of Harry Kane in attack.

Kyle Walker dropped into a back three alongside the recalled Conor Coady, while Justin lined up at left wing-back opposite Trent Alexander-Arnold.

The one positive of the players looking to make a name for themselves was Bowen, who looked at home in the international fold and had four of England’s 12 shots over the 90 minutes while also looking their most creative player.

Coady was another positive for Southgate, showing good awareness to clear Szoboszlai’s goal-bound shot off the line and glancing a header inches wide of the far post at the other end from a free-kick, but he still appears likely to remain on the periphery of the England squad ahead of the World Cup.

England had scored in each of their last 14 games, netting 45 goals along the way, since a goalless draw – almost as frustrating as their Budapest defeat – against Scotland in the Euro 2020 group stage last summer.

Hungary ‘keeper Peter Gulacsi did not have to be at his best to end the Three Lions’ run as tired legs and a lack of attacking rhythm, despite the visitors dominating possession, ensured they would come up short in the Hungarian capital.

Harry Kane often dropped deep to get involved in the build-up but left England lacking numbers in the Hungary box, and it was not until Bukayo Saka, introduced as a half-time substitute, raced through and tested Gulacsi from a tight angle that the former Liverpool goalkeeper was called into action.

Bowen’s already positive debut could have been even more promising had he finished off one of a number of half-chances he was given, with the best a well-struck volley from Harry Maguire’s raking ball comfortably held by the Hungary stopper.

A late Kane snapshot rippled against the side-netting as the England captain sought his 50th international goal, but it would have been harsh on a Hungary side who were worthy of a historic three points to kick off their Nations League campaign.

Southgate, who fielded four players with 10 England caps or fewer in an experimental starting line-up, said any signs of fatigue had not been shared on the training pitch as the Three Lions prepared for a bruising run of four matches in 10 days only a fortnight after the end of the Premier League season.

Ahead of facing Germany in Munich on Tuesday night, the England manager said he would reassess whether he had misjudged the balance of his side in their first defeat for 19 months.

He told Channel 4: “We have to accept we didn’t do enough to win the game. A draw would’ve been fair, we had enough possession, we weren’t incisive around the box, and we didn’t create too many clear-cut chances.

“It’s been a long season, but I haven’t seen that in training. The heat was a factor, that took a lot out of the players and we tried to refresh the team a bit earlier than we would do normally.

“That balance of finding out about new things, and the consistent more regular team, I’ve got to look at whether I got that balance quite right.

“I don’t want to be too harsh on the players, these are games we need to learn from. They’re bitterly disappointed, they want to win matches and if we want to be a team right at the top tier of world football, we have to come here and win.”

England face an old enemy in Germany when they travel to the Allianz Arena on Tuesday, kick-off 7.45pm. Follow live build-up and coverage across Sky Sports digital platforms from 6pm.