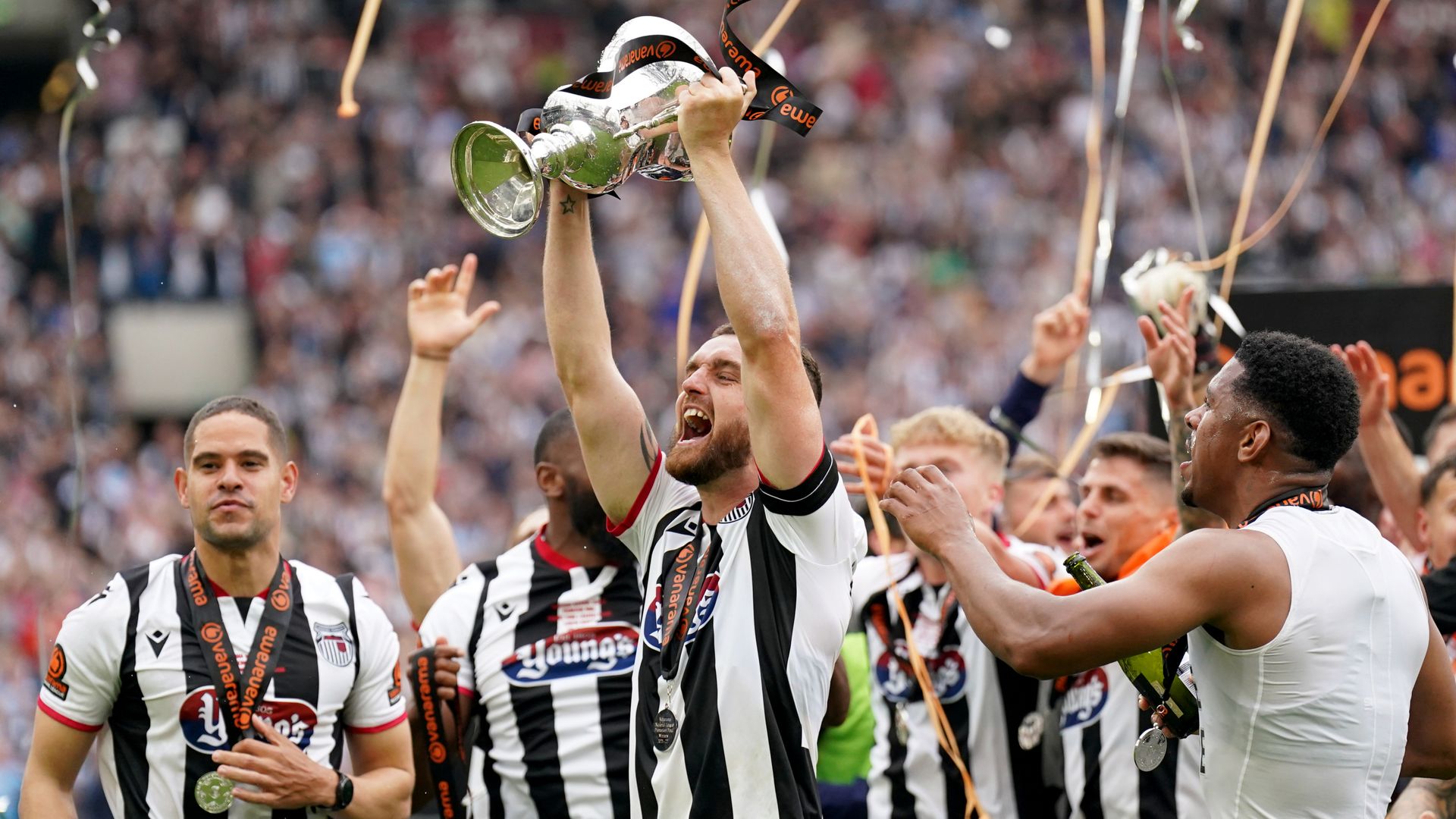 Grimsby beat Solihull to seal EFL return | Hurst: It was meant to be

Grimsby Town sealed an immediate return to the EFL as they came from behind to beat Solihull Moors 2-1 after extra time in the National League play-off final.

Goals from John McAtee and Jordan Maguire-Drew secured promotion for the Mariners after Kyle Hudlin had given Solihull the lead just before half-time.

It was Solihull who scored the game’s opening goal and it came against the run of play when Joe Sbarra’s cross was headed into the net by striker Hudlin.

Grimsby had to wait until the 69th minute to equalise when McAtee connected with Andy Smith’s inch-perfect through ball to calmly stroke in his 16th goal of the season.

As the game headed into extra time, both sides looked for a winner and it was Grimsby who eventually made the breakthrough in the 111th minute. Solihull failed to clear a long throw into the box as Maguire-Drew completed the turnaround by finishing at the back post.

Grimsby, who were moments away from being knocked out in the first play-off eliminator against Notts County, are the first side to finish as low as sixth to be promoted from the National League since the play-off format was restructured.

Hurst: It was written for us

Grimsby Town manager Paul Hurst told BT Sport: “I am happy. Very, very happy. Before we go on I want to say commiserations to Solihull and to Neal Ardley. I’m sure it will be their time in the not too distant future.

“I said going into the game I didn’t think that extra time would affect us. What fantastic character.

“We looked too nervous at the start of the game, we were playing the occasion not the game. I just had to remind them of what they’ve done.

“Again, we spoke about the importance of the substitutes, the role they’ve played getting us to this point. And it’s a sub who gets the winning goal.

“It’s somehow meant to be. I said it to the players, some things are just written. It’s all just crazy.

“It’s funny. Jordan Cropper [who took the long throw that led to the winner] may not have played today.

“There’s very little rest and turnaround, we’ve somehow got to get a squad for the EFL. We’ll give that a good go as well.”

Ardley: My players gave everything

Solihull Moors boss Neal Ardley speaking to BT Sport: “Listen both teams had loads of chances. Finals are always down to small margins. You look at their winning goal, it came off our man’s head to the back post.

“It’s just those moments where you keep asking questions. On the day they nicked the winner. I don’t think either team deserved to win or to lose. But it is what it is. It’s a final and that’s what the play-offs are all about.

“Grimsby did a good job on us. They are a good team, they set up to stop us. We still had enough chances to score and win the game. They had chances. It was a very tight game, I knew it would be.

“I knew the final would come down to small margins. Unfortunately for the amazing group I’ve got, the margins have gone against us.

“It’s the play-offs, that’s what it’s about. It’s exciting, but we finished third on 87 points, we were magnificent all season. But it will always boil down to this one game.

“Unfortunately they got the momentum and won it. Credit to them and Paul Hurst, he’s a great guy. To be fair they’ve got through three extra-times to be here.

“You’ve got to take your hat off to them, but my boys gave everything. They couldn’t give any more.”