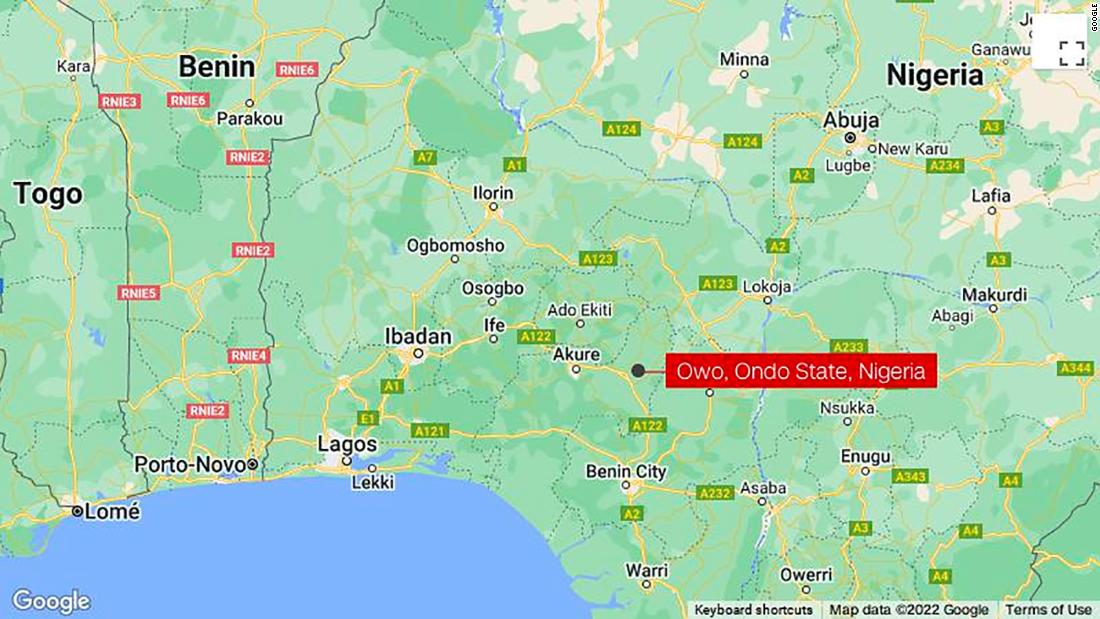 Nigeria (CNN)A church in southwestern Nigeria became the site of a bloody attack on Sunday, according to local lawmakers.

Attackers stormed into the church in the city of Owo and began “shooting sporadically,” Adeyemi Olayemi, the legislator representing the Owo constituency in the Ondo State House of Assembly, told CNN.

“The attackers came in motorcycles and started shooting sporadically,” he said. “They killed many people inside the church.”

Victims are being are taken to Federal Medical Center in Owo, Olayemi said.

State police could not confirm the total number of casualties at St. Francis Catholic Church, a police spokesperson told CNN, nor could they identify those behind the attack.

Ondo State Governor Arakunrin Akeredolu said he was “shocked” by the attack and called it a “black Sunday in Owo.”

“I am deeply saddened by the unprovoked attack and killing of innocent people of Owo, worshiping at the St. Francis Catholic Church, today,” he said on Twitter, adding that “the vile and satanic attack is a calculated assault on the peace-loving people of Owo Kingdom who have enjoyed relative peace over the years.”

The governor vowed to “commit every available resource to hunt down these assailants and make them pay.”

“We shall never bow to the machinations of heartless elements in our resolves to rid our state of criminals,” he continued, asking the public not to “take the laws into your hands.”

“I urge our people to remain calm and vigilant. Do not take laws into your hands. I have spoken to the heads of the security agencies. I have equally been assured that security operatives would be deployed to monitor and restore normalcy to Owo kingdom,” Akeredolu wrote.

Lethal attacks by motorbike-riding gangs are rare in southwestern Nigeria. Such attacks are more widespread in swathes of the country’s north, which is constantly under siege by Boko Haram terrorists and marauding gunmen known locally as ‘bandits.’

The Owo church attack comes one week after another church tragedy, when 31 people were killed and others injured during a stampede at a church event in the southeastern Nigerian city of Port Harcourt.