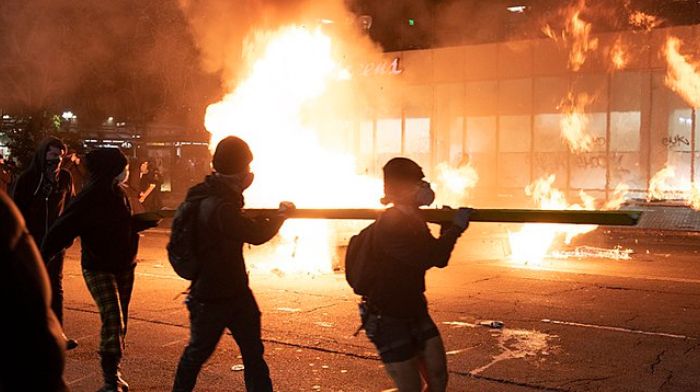 If you think American justice is blind, you live in a different world than the rest of us. Some might argue that justice favors the white and privileged in the country.

However, recent actions indicate the pendulum swings hard in the other direction. For example, two lawyers who participated in the 2020 Black Lives Matter riots were facing significant charges for throwing molotov cocktails at police.

The operative word is were. Thanks to the Biden administration’s Department of Justice, they now face a much smaller sentence.

The two lawyers were facing domestic terrorism charges and the possibility of 30 years in jail. This week, the Biden Administration agreed to a massive reduction of the charges in a plea agreement that will likely result only in a couple years of jail time.https://t.co/dLCKAWqzqv

Who Are Colinford Mattis and Urooj Rahman?

In the summer of 2020, Rahman and Mattis took to the streets of New York to ‘protest’ police brutality. Rahman was caught on video throwing a molotov cocktail into a police vehicle and fleeing the scene. Mattis was videotaped handing out molotovs to fellow rioters.

Last year both had pleaded guilty to one count of possessing and making explosive devices, which could have landed a 10-year prison sentence.

Now, they get to withdraw their guilty plea and plead guilty to conspiring to assemble Molotov cocktails with the intent to damage the New York Police Department patrol car.

What provides them this latitude? Why the Justice Department, of course.

Along with a United States probation official, the DOJ suggests that federal sentencing guidelines had led to an excessive sentence for these two under the umbrella of an act of terrorism.

It is interesting to note a quote Rahman gave reporters the night of the riot in question:

“…the only way they hear us is through violence.”

Is domestic terrorism too excessive of a sentence?

Rahman went on to say:

The FBI defines terrorism as “Violent, criminal acts committed by individuals and/or groups to further ideological goals stemming from domestic influences, such as those of a political, religious, social, racial, or environmental nature.”

There is a fair amount of debate about comparisons between the BLM summer riots and the January 6th riot. Some would say they are apples and apples. Both were riots meant to instill fear.

Some would say they are apples and oranges. One was spread out among major American cities. One was localized in one city in a particular building and caused a democratic process disruption.

Regardless of the above, you can’t help but notice that the zeal to punish the January 6th rioters is quite different from the BLM rioters.

There have been 140 prosecutors assigned to the January 6th riots. They have charged over 725 people, issued over 5,000 subpoenas, and search warrants, seized over 2,000 devices, reviewed over 20,000 hours of video, and investigated more than 300,000 civilian tips.

However, according to a RealClearInvestigations report, the 2020 BLM riots produced:

“15 times more injured police officers, 30 times as many arrests, and estimated damages in dollar terms up to 1,300 times more costly than those of the Capitol riot.”

Notably, RealClearInvestigations estimates “6-20+” fatalities associated with the BLM riots. In contrast, the only person killed on January 6 was unarmed Air Force veteran Ashli Babbitt, who was killed by police.

Perhaps the most alarming is the property damage alone that summer. Over $1 billion worth of damage. The most expensive in insurance history. Talk about breaking records.

Judges have not been in unanimous agreement regarding the sentencing of January 6th rioters. Most outspoken is Judge Trevor McFadden of the United States District Court in Washington D.C.

“I think the U.S. attorney would have more credibility if it was even-handed in its concern about riots and mobs in this city.”

Judge McFadden’s peer Judge Tanya Chutkan has a different view and said of one of the January 6th rioters:

The rioters WERE BLM

“ The dispute flared anew on Monday, when Judge Tanya Chutkan pointedly rejected her own colleague’s comparison between the Jan. 6 mob and the rioters who exploited the Black Lives Matter demonstrations last year.”https://t.co/83PfusSkan via @politico

Politics are pervasive in every facet of our government, including the justice system.

For example, President Biden’s first Executive Order when he took office was the Executive Order titled “Advancing Racial Equity and Support for Underserved Communities through the Federal Government.”

If you read the EO, it defines specific terms. However, words do actually matter, at least in this humble writer’s opinion, so let’s take a deeper look.

According to the EO, equity is defined as:

“…the consistent and systematic fair, just, and impartial treatment of all individuals…”

“…including individuals who belong to underserved communities that have been denied such treatment, such as Black, Latino, and Indigenous and Native American persons, Asian Americans and Pacific Islanders and other persons of color; members of religious minorities; Lesbian, Gay, Bisexual, Transgender, and Queer (LGBTQ+) persons; persons with disabilities; persons who live in rural areas; and persons otherwise adversely affected by persistent poverty or inequality.”

Wouldn’t fair and just equitable treatment of all individuals be enough? So why further qualify ‘all’?

To understand, we have to peak at the Biden administration’s Equity Action Plan, which stems from this EO.

Removing the Blindfold from Lady Justice

The Biden administration launched its Equity Action Plan, which received resounding approval from, you guessed it, Black Lives Matter.

BLM said of the plan:

“Biden’s actions plan is a major win for the organizations like BLMGNF who have been working with the White House to help develop it since the end of 2020.”

If we look at the directives that the plan sent to the Department of Justice, we can see how influential BLM has been. For example, the plan directs the DOJ staff to consider “equity considerations” in “historically underserved and marginalized communities.”

It’s no wonder that Rahman and Mattis have received so much leniency from the DOJ. I wonder what Lady Justice sees when she gazes upon our country?

Is it fairness and equity? Is it law and order? I doubt it.