BREAKING NEWS
GMT+2 09:07
Home Politics Hero Uvalde Mom Who Saved Her Children Says She Was Threatened Not To Speak To Media 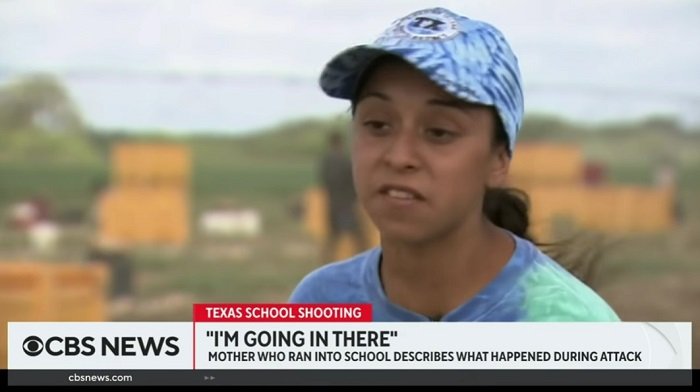 The hero mom who was handcuffed, released, and ran into Robb Elementary School in Uvalde, Texas to save her children from the horrific school shooting claims police threatened her not to speak to the media.

Angeli Rose Gomez had to drive 40 miles from her job as a farm worker to reach the school after learning of the lockdown due to an active shooter. Once there, she was reportedly placed in handcuffs for allegedly being ‘uncooperative’ by U.S. Marshals.

Gomez says she convinced one of the officers to release her, and upon being freed, jumped the fence, ran into the school herself even as shots were still reportedly being fired, and fled with her children.

A video posted online, which appears to reveal the scene outside the elementary school, shows people yelling and screaming as police push people back from the perimeter. Some appear to have been tackled to the ground and detained.

This video make so much more sense now. The cops literally stopped parents from helping their kids. pic.twitter.com/zhQfUjlpjd https://t.co/DqgZUH3uCC

RELATED: Videos Surface Showing Parents Pleading With Cops To Take Down Uvalde Shooter While He Was Inside Classroom For Up To An Hour

Uvalde Mom Says She Was Threatened By Police

Angeli Rose Gomez, the mom who took matters into her own hands to save her children in Uvalde when the police response seemed inadequate, is speaking out.

Her version of events describes the school police officers who listened to stand-down orders as “cowards.”

It’s worth repeating. A mom drove there. Got handcuffed. Got out of handcuffs. Hopped a fence. Went inside the school and walked out with her two kids. All while 19 officers waited outside the classroom where the gunman was. #UvaldePolice #Uvalde

And their actions don’t appear to be getting any better in the aftermath.

According to Gomez, she was contacted by law enforcement officials and threatened with a probation violation for obstruction of justice if she keeps talking with the media.

An officer, she said, had issued the warning in reference to a charge from over a decade prior. But Gomez, after hearing from the judge in that case, says she was given the green light to keep speaking out against the police response.

“Nothing was being done,” the Uvalde mom said in an interview with CBS News. “If anything, they were being more aggressive against us parents who were willing to go in.”

Gomez says she was told by one officer, “‘Well, we’re gonna have to arrest you because you’re being very uncooperative.’”

The police response to the Uvalde shooting has been tragic in its own right, leading to far more questions than there have been answers.

Arredondo reportedly made the call to hold back police officers arriving on the scene of the shooting because he believed the situation had shifted from an active shooter scenario to a barricaded subject scenario.

According to some reports, officers waited over an hour – by which time 19 children and two teachers had been killed – before border patrol agents finally ignored his orders and stormed the classroom.

Please Share
Angeli Rose Gomez is the mother who was temporarily handcuffed.
After being released, she jumped over the school fence and ran inside to rescue her two children.#AngeliRoseGomez #AngeliGomez #UvaldeTX #BuffaloNY #GunRegulation #GunReform pic.twitter.com/8eTSElVvt8

Gomez added that there were still gunshots being fired when she was inside the school despite Arredondo’s belief that the shooter was already barricaded alone inside a room when police arrived.

A Texas Department of Public Safety (DPS) lieutenant told CNN’s Wolf Blitzer that police officers responding to the shooting were held back because “they could have been shot.”

“I’m telling you, I don’t see any of y’all in there,” Gomez says she told officers at the scene. “Y’all are standing with snipers and far away. If y’all aren’t going in there, I’m going in there.”

And she did, likely also concerned she could have been shot, but undeterred regardless.

Here’s the mother, Angeli Rose Gomez, who jumped the school fence and ran into Robb Elementary to save her two children after being handcuffed by a US Marshall.

The three sprinted out of the school together. #Shero #MomOfTheYearpic.twitter.com/g1DosV6UnT

An investigation into the police response has been ongoing but shockingly, Arredondo is, according to ABC News, “no longer cooperating with the Texas Department of Public Safety’s investigation” into the events of the school shooting.