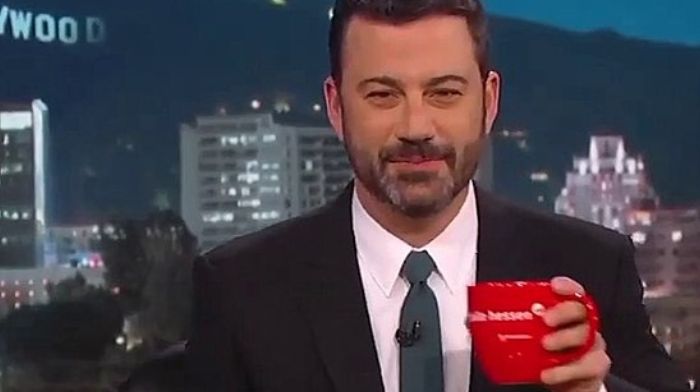 By Christian Toto for RealClearPolitics

Yes, the real estate mogul no longer calls the White House home, but chances are you’ll hear Donald Trump jokes in any given late-night monologue. And they’ll draw satirical blood. That’s all well and good, but Trump no longer lives at 1600 Pennsylvania Ave., and he can’t even steer all his favorite GOP candidates to victory these days.

There’s a ready Trump replacement for Colbert and Co., a politician who might be commander in chief should the current occupant’s health falter. So far, mainstream comics won’t lay a glove on her despite enough material to fill a year’s worth of monologues.

The 57-year-old Californian has only been in office a little more than a year, and already she’s amassed a treasure trove of mockable moments. Cackles. Gaffes. Empty results. Calamitous polling numbers. Emotionally distressed ex-staffers. And a new gold standard for political word salad.

So where are the jokes? Of course, these same satirists should be tweaking President Biden, who also suffers from horrific polling numbers and his own gaffe-tastic spells. Harris still represents a unique satirical target, a chance to make the vice presidency part of the comic fabric. Again.

Veeps aren’t prime fodder for political comics, at least on paper. They’re second in command and serve in a ceremonial capacity, for the most part, meaning comics would rather target the boss instead. But they can still draw comedic attention when they step out of line.

Just ask Dan Quayle. George H.W. Bush’s sidekick got punished by comedians for his perceived lack of intelligence. Quayle didn’t help himself, uttering absurd lines like, “The Holocaust was an obscene period in our nation’s history. I mean in this century’s history. But we all lived in this century. I didn’t live in this century.”

These things aren’t always fair – and wouldn’t be for Kamala Harris if anyone dared tease her. Quayle’s infamous misspelling of “potato” at a 1992 school appearance, for instance, was prompted by an erroneous cue card given to him by a teacher. Nonetheless, it became his comedy anchor. You can’t blame comedians for teeing off on that gaffe.

Comedians got an early start on Quayle quips. David Letterman devoted six “Top Ten” lists to him during the 1988 election cycle on his NBC showcase. Quayle, he noted, “would not seem like a brainy egghead when visiting the nation’s injured professional wrestlers.”

Jay Leno, filling in for Johnny Carson on “The Tonight Show,” compared Quayle to his VP competition, Lloyd Bentsen, saying the former had two pluses over the older man – “a blow dryer and a pulse.”

Late night hosts also targeted the vice president mercilessly during the Trump years. Vice President Mike Pence made headlines for revealing he doesn’t spend time alone with any woman other than his wife. Comedians pounced, and seized, turning him into the ultimate square.

Comedians even channeled Pence’s COVID-19 vaccine injection for a skit mocking both him and President Trump. We can’t forget the fly that invaded Pence’s follicular airspace in the 2020 vice presidential debate. Earlier this year, the host of “Jimmy Kimmel Live” mocked Pence by bringing up notes Trump took during his time in office. “I know it wasn’t intentional,” Kimmel said. “But a blank space between two parentheses is the most perfect description of Mike Pence I’ve ever seen. It should be on his Christmas cards.”

RELATED: Democrat Rep Admits What They Believe On Guns: ‘Spare Me the Bulls*** About Constitutional Rights’

Even The Onion poked serial fun at Biden when he served under President Barack Obama. They wrote the book on the subject – “The President of Vice: The Autobiography of Joe Biden.”

Why poke fun at Harris, the first female vice president and a person of color? The real question is, “Why not?” – especially since her public persona all but demands a satirical scorching. Her scattershot speeches routinely go viral on social media, with “amateur” comics doing the work Team Late Night won’t do. Here’s her TED talk touting high-speed Internet:

“We also recognized, just as it has been in the United States, for Jamaica, one of the issues that has been presented as an issue that is economic in the way its impact has been the pandemic … So to that end, we are announcing today also that we will assist Jamaica in COVID recovery by assisting in terms of the recovery efforts in Jamaica that have been essential to I believe what is necessary to strengthen not only the issue of public health, but also the economy.”

Harris also stumbles during softball interviews, be it with MSNBC’s Joy Reid or NBC’s Lester Holt. She gaffed her way through one Holt Q&A by insisting (three times) that she had been to the southern border only to have that position gently corrected.

Her response was to lash out at Holt and conjure up a bizarre non sequitur. “And I haven’t been to Europe,” she said. “And I mean, I don’t understand the point that you’re making … I’m not discounting the importance of the border.”

Last year, she offered this oddball homily during an appearance in France: “We must together. Work together. To see where we are. Where we are headed, where we are going and our vision for where we should be. But also see it as a moment to, yes. Together, address the challenges and to work on the opportunities that are presented by this moment.”

“Every time she speaks, it’s like watching Wile E. Coyote’s feet keep spinning madly even after he’s run off the cliff,” NY Post columnist Kyle Smith quipped. And he’s not a professional comedian.

Her most recent word salad entrée? A plea to work together on the environment’s behalf.

Need more Harris fodder? Her staff defections are so common it’s yet another comic through-line to throw on the already massive pile. One unnamed ex-staffer said Harris underlings endure a “constant amount of soul-destroying criticism.”

And then there’s that cackle. Harris laughs at inappropriate times, a troubling tic for any politician. She even chuckled over a question regarding Ukrainian refugees fleeing the Russian invasion. It makes imitating her a snap, but has Maya Rudolph even attempted Harris’ signature quirk? Rudolph has played Harris sparingly on NBC’s left-leaning “Saturday Night Live” over the years, but those appearances have mostly disappeared since Harris became vice president.

They also avoid her flaws. A March 2021 SNL skit found Rudolph, as Harris, hosting a unity Seder dinner. The jokes landed against her guests, including SNL players as Sen. Ted Cruz and Rep. Marjorie Taylor Greene.

Trump made political humor so much easier. Some could argue too easy, given the lazy jabs at his “orange” skin and curious ‘do. Harris isn’t Trump, but she’s tailor-made for comic vivisections.

Harris jokes might help late-night comics bolster their ratings. A Rasmussen Reports survey shows “54% do not believe the former California senator is qualified to be president.” Her overall polling numbers remain weak, meaning comedians risk little for targeting her with their barbs.

It’s one reason Greg Gutfeld shocked late night last year by rising to the top of the ratings heap. The Fox News star regularly mocks Harris from his popular perch, eclipsing iconic shows like “The Tonight Show” in the ratings race.

“She is truly a national treasure, if by treasure, you mean, embarrassment,” Gutfeld said recently.

What does Harris have to do to get Comedy, Inc.’s attention? Then again, maybe their relative silence is based in fear, not punchlines. A silly Twitter jab at the vice president cost one conservative talker her gig. So is it any wonder that Jimmy Kimmel has defended, not mocked, Harris’ poor poll numbers by playing two cards – racism and sexism?

Kimmel quipped, “I think I know why Kamala’s ratings are low, besides sexism and racism, which are the obvious ones. It’s because whenever she’s next to Joe Biden, standing near or behind him, she looks like an assassin.”

Does he want to break his own rules by giving her a good-natured ribbing? Does he fear the consequences? Comedians may be more worried about their next paycheck than about stepping on comedy’s vice presidential third rail.

Christian Toto is the author of “Virtue Bombs: How Hollywood Got Woke and Lost Its Soul.”