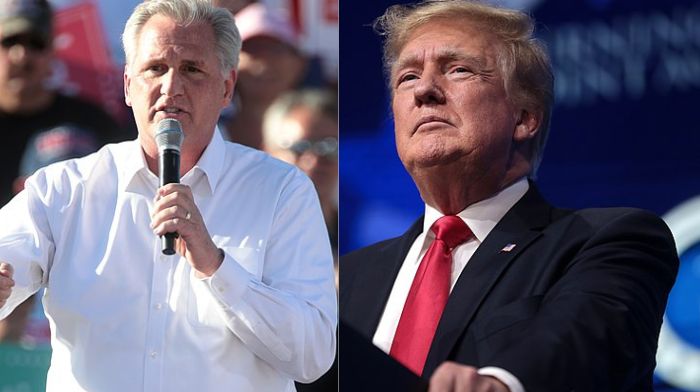 President Donald Trump endorsed House Minority Leader Kevin McCarthy (R-CA) as “an outstanding Representative” and a “strong and fearless Leader” in a Truth Social post Saturday, despite revelations of McCarthy’s plot to ask Trump to resign after the Capitol riot on January 6, 2021.

McCarthy, widely considered to become the Speaker of the House if Republicans win the midterm elections in November, represents California’s 23rd Congressional District.

“In Congress, Kevin is a tireless advocate for the people of Bakersfield and the Central Valley,” Trump said. “He is working incredibly hard to Stop Inflation, Deliver Water Solutions, and hold Joe Biden and Nancy Pelosi Accountable for their catastrophic failures and dereliction of duty.”

Trump made this endorsement despite McCarthy’s resignation comments that came to light in April.

Trump’s McCarthy endorsement drove yet another wedge between him and his base. More so than the Oz endorsement.

If he finally loses his base it will be because of death by 1000 paper cuts.

McCarthy was caught on a recording with Republican leaders discussing a plan to ask President Trump to resign following the political fallout of the January 6 riot.

In the conversation, Never Trump Republican and January 6th Committee member Liz Cheney asked if McCarthy has discussed resignation with Trump. McCarthy replied that he had not asked the President yet, but he planned to do so.

“Again, the only discussion I would have with him is that, I think this will pass [Congress]” McCarhty said. “And it will be my recommendation [Trump] should resign. I mean, that would be my take. But I don’t think he would take it. But I don’t know.”

The item before Congress appears to be what would become the second impeachment case against Trump.

The comments were first reported by two New York Times reporters, Alex Burns and Jonathan Martin, in their book “This Will Not Pass.”

Despite the recording, McCarthy vehemently denied making any comments about asking Trump to resign in a statement he posted to Twitter.

“The New York Time’s reporting on me is totally false and wrong,” McCarthy tweeted. “It comes as no surprise that the corporate media is obsessed with doing everything it can to further a liberal agenda. This promotional book tour is no different. If the reporters were interested in truth why would they ask for comment after the book was printed?”

My statement on the New York Times pic.twitter.com/PWi2WkoWzh

Whatever was discussed on the Jan. 10 phone call with Representative Cheney never came to fruition.

Trump’s base of MAGA voters was clearly miffed by the McCarthy endorsement, especially considering his resignation plot. Following Trump’s endorsement of the Congressman, his supporters booed the mention of McCarthy’s name at a rally over the weekend.

Twitter mentions of McCarthy’s endorsement refer to him as a RINO who lets Speaker of the House Nancy Pelosi (D-CA) take advantage of him.

Let’s be clear, I support Trump 🇺🇸 but not RINO Kevin McCarthy.

They are not all the same brand of MAGA Republicans as Trump himself, but Trump likes to pick winners and there is no other Republican running in McCarthy’s race who could beat him. It may be as simple as that.

QUICK QUESTION:
Do any candidates running against Kevin McCarthy in District 20 have the slightest chance of beating him in the upcoming election? If not… it is wise for Trump to support him. Whatever Trump’s strategy, it’s evident that going public with it now isn’t wise. -VJ

Trump explained his reasons for backing McCarthy in his own statement on Truth Social, where he listed a number of areas where McCarthy is leading Republicans in Congress.

“As Leader, Kevin is building a commitment to Americas platform to grow our economy, fight big tech censorship, secure the border, strengthen our military, defend the Second Amendment, improve our health care, restore American energy independence, support our brave veterans, and uphold the Rule of Law and American values.”

He concludes the endorsement saying, “Kevin McCarthy has my Complete and Total Endorsement for California’s 23rd Congressional District!”