BREAKING NEWS
GMT+2 06:59
Home Politics ‘Gun Reform’ Is Just Another Word For ‘Nothing Left To Lose’ 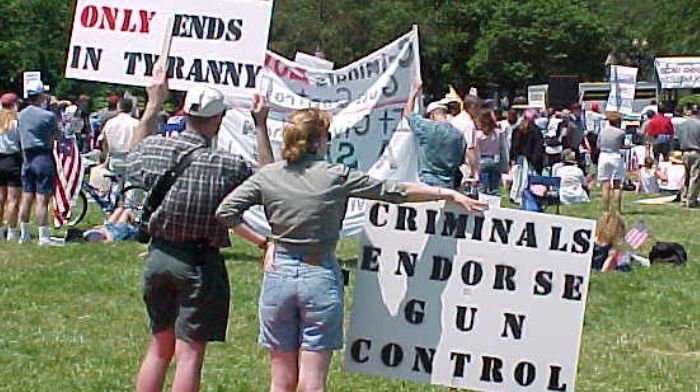 ‘Gun Reform’ Is Just Another Word For ‘Nothing Left To Lose’

By Frank Miele for RealClearPolitics

Last week came the announcement that a “bipartisan” group of 20 senators, including 10 Republicans, had reached an agreement on gun law reform in response to the mass shootings in Buffalo, New York, and Uvalde, Texas.

No one should have been surprised. When Democrats hoist “reform” up the political flagpole, a small but reliable cadre of compliant Republicans is always on hand to salute, especially after being told that the nation is in a crisis.

President Obama’s first chief of staff Rahm Emanuel said the quiet part out loud during the Great Recession when he told the Wall Street Journal, “You never want a serious crisis to go to waste. And what I mean by that is an opportunity to do things that you think you could not do before.”

In that case, it meant spending nearly $800 billion on Obama’s American Recovery and Reinvestment Act, the stimulus program that was supposed to lift the economy out of danger. Did it work? Well, that depends. The recession ended, but it would have ended anyway. What it accomplished, that could not have happened naturally, was increasing public dependence on government handouts in the form of extended unemployment benefits and stimulus checks.

In retrospect, the 2009 stimulus program was a dry run for the much more bloated COVID-19 stimulus packages which have cost nearly $6 trillion, turned millions of Americans into stimulus junkies, and wiped out thousands of small businesses.

This is what Emanuel and his Democratic Party allies Nancy Pelosi and Chuck Schumer would call economic reform. It’s what I would call the first step toward Chinese-style state capitalism, teaching Americans that the government is the provider of economic stability and personal security. You could also call it a massive bribe.

In the case of COVID, a payoff in exchange for the loss of civil liberties in the form of lockdowns and forced vaccinations. Do what we want and we will take care of you.

That mindset is the precondition for convincing the public to accept changes and autocratic rules that, on their face, are illogical, impractical, and un-American. By inverting the relationship of the people to the government so that the people no longer enjoy primacy, are no longer “We the People” but rather “We the Governed,” it is possible to dictate over time a complete reshaping of society. The gun issue illustrates that perfectly.

Remember, the Constitution guarantees “the right of the people to keep and bear arms” and says firmly that this right “shall not be infringed.” But all Democrats and at least 10 Republican senators want to convince you that they are not infringing on your rights while they whittle away at the Second Amendment, piece by piece, by deciding what kinds of firearms you can purchase, and when, and how many, and requiring a license for concealed carry.

An honest reading of Constitution would conclude that the right to bear arms is infringed dramatically when the government sets conditions upon how you carry them. Moreover, the red-flag laws supported by the “gun law reform” advocates not only violate the Second Amendment, they also violate the most precious guarantees of due process and protection against unreasonable search and seizure. Oh well, it’s only the Bill of Rights.

And if the “bipartisan” reformers can overlook or ignore the Constitution, then how much easier it will be for them to reform us into complete submission whenever a new “crisis” is declared by the mainstream media. Eventually, reform will be just another word for “nothing left to lose.”

Let’s consider the various “reforms” left-wing politicians have carried out or contemplated for the past 20 years.

Health-care reform was the first success for what Barack Obama rightly called “the fundamental transformation” of America from a nation of rugged individuals to a collection of supplicants with their hands out for the next fix. For more than 50 years, conservative politicians have pushed back against the assertion that it’s a fundamental human right that all Americans receive basically the same health care. If there is a natural right to health care, there is also a natural right to be paid for services rendered, and for doctors to work when and how they decide.

But that sounded harsh, so when Democrats promised unlimited health care, they became what Elon Musk recently characterized as “the kindness party.” That pretty much sums up their entire strategy for convincing the American public to jettison centuries of tradition in the name of “reform” – no criminal, drug addict, deadbeat, degenerate, or corrupt politician can be left behind. We must reach out a hand of kindness to all of them.

So that’s how we get immigration reform, energy reform, drug law reform, gun law reform, and now election reform. Well, who can be against reform? It’s almost as though the word “reform” was a trigger word like the ones that hypnotists use to get their subjects to bark like a dog. For some reason, whenever Americans are told by Democrats and useful idiots in the Republican Party that something is a reform, they lose all power of discernment.

Think about it. Immigration reform has never meant restoring order to our immigration system by closing the border and restricting immigration to foreigners who have applied legally, been vetted, and proven their love for the country they want to enter. Hell no. Instead, it means giving amnesty, if not citizenship, to the millions of lawbreakers who have already entered the country illegally. That’s not reform. That’s capitulation.

Energy reform is code for the Green New Deal, which means eliminating fossil fuels, the most practical and inexpensive forms of energy, and replacing them with experimental technologies that will make more billionaires in Silicon Valley and make the rest of us dependent on the whims of bureaucrats and the vagaries of government mandates and restrictions.

As for election reform, thanks to the Democrats in Congress, we now know that it means banning states from requiring voter ID so we can actually tell who voted and whether they were legally allowed to do so in the first place. If that isn’t crazy, I don’t know what is. But the progressive left will keep pushing it under the banner of reform – and call anyone who doesn’t agree a “racist” – until they succeed in getting enough Republicans to bark it into law.

Drug law reform means throwing up our hands and saying that we value empty prison cells more than we value full lives. Just because millions of Americans want to throw away the possibility of a meaningful future for their next fix doesn’t mean society should condone such irresponsibility.

Criminal justice reform, meanwhile, may be the biggest threat to the rest of us, as the far-left prosecutors in big cities like San Francisco, Los Angeles, and Philadelphia have proved. When reform means letting criminals out on the streets to pillage, terrorize, and murder without consequence, it’s hard to see the difference between civilization and barbarism.

But this reckless far-left policy may have been the slap in the face we needed. When progressive San Francisco voted earlier this month to give radical district attorney Chesa Boudin the boot, they gave hope to the rest of us that we can wake up from our reform-induced trance and start thinking like people rather than Pavlov’s dogs.

But that hope will only come to fruition if enough people rise up like Elon Musk and throw off the chains of “kindness” that have bound them for too long. Break out of the Democrats’ “reform school” and start thinking for yourself.

Frank Miele, the retired editor of the Daily Inter Lake in Kalispell Mont., is a columnist for RealClearPolitics. His new book, “What Matters Most: God, Country, Family and Friends,” and his earlier books are available from his Amazon author page. Visit him at HeartlandDiaryUSA.com to read his daily commentary or follow him on Facebook @HeartlandDiaryUSA or on Twitter or Gettr @HeartlandDiary.