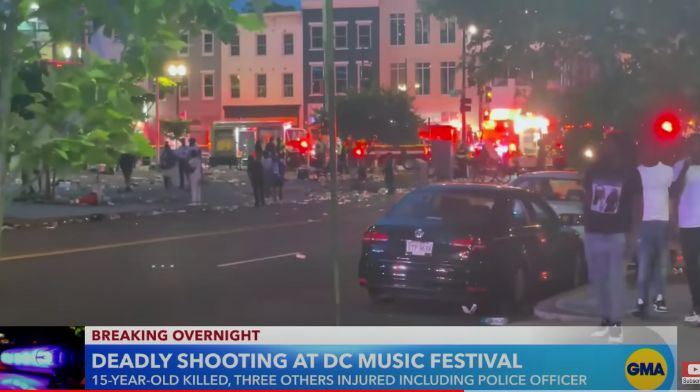 On Sunday during a Juneteenth concert in a popular night life area of Washington D.C., multiple people were shot, killing a 15-year old boy and wounding several others, including a Washington D.C. Metro Police officer.

At the #Moechella black music festival yesterday in DC to celebrate #Juneteenth, a mass shooting broke out that resulted in a cop being shot, a teen being killed & 2 others injured. No suspect has been arrested. pic.twitter.com/lqsNxQL9E9

According to Washington D.C. Police Chief Robert Contee, several other minor incidents had already broken out prior to the shooting, causing some fear and some concert goers possibly being trampled in the confusion.

Mayor Muriel Bowser said of the event, which did not have the proper permits to take place:

“We have a child who was killed today at an event that did not have any proper planning for the number of people who were here and with guns involved. The chief and I will continue to make sure we have the resources we need on these corridors and all of our corridors, but we need some accountability here.”

“When you have large gatherings in a dense area, all it takes is one person introducing a gun to the situation that makes it deadly. In this case, unfortunately, a 15-year-old lost his life.”

RELATED: Fire And Brimstone From The Hip: Trump Previews 2024 Campaign

As if trying to afford soaring gas and food prices weren’t enough for Americans to have to endure daily, crime rates in many major American cities have skyrocketed.

The statistics for 2021 paint a dismal picture for America’s cities. Places where crime was already high, like Philadelphia, New York City, and Los Angeles, all broke records in 2021. Even places not normally included in high crime statistics, like Rochester, New York, were mentioned.

Some those same cities, after the death of George Floyd in May of 2020, called for defunding the police.

It took less than a year for many city leaders to figure out that defunding the police was a negative for their cities. Prior to his leaving office, former New York City Mayor Bill DeBlasio added $92 million for a new precinct.

Baltimore’s Mayor Brandon Scott, who as a city councilman called for defunding police to the tune of $22 million, flip flopped as mayor and proposed a $27 million increase. Los Angeles reinstated $3.3 million of $29 million that was cut in 2020.

In February of this year, New York Democrat Rep. Richie Torres went one step further. During an interview with MSNBC, Torres declared:

“I agree with the Mayor. The defund police movement is dead in New York City and good riddance. And any elected official who is advocating for the abolition or even the defunding of police is out of touch with reality and should not be taken seriously.”

RELATED: Tulsi Gabbard Swipes At ‘Optimistic’ Biden: Is He Unaware He’s President Of A Country Where People Can’t Afford Groceries Or Gas?

Recently, Joe Biden called on local and state leaders to use funds from the $1.9 trillion COVID stimulus to fight crime in their communities. In another attempt to distance Democrats from the “defund the police” calls championed by progressives, Biden called for funding of police.

“We’ve all agreed, as I’ve said from the outset, that the answer is not to defund the police. The answer is to fund the police with the resources and training they need to protect our communities. Investing in crime prevention and accountable community police officers who walk the beat, who know the neighborhood, and who can restore trust and safety.”

The leadership of the Democrat Party may have to get tough with progressives who still harbor “defund the police” fantasies if they have a chance to salvage anything in November.

Nothing says;
Happy Juneteenth like a gun fight at an intersection.