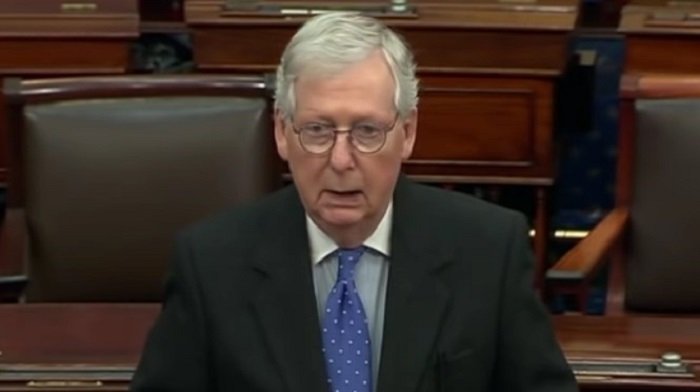 A group of 14 Republicans voted with Democrats to advance a gun control bill Tuesday night, less than two hours after the text had been circulated.

An original group of 10 GOP senators had announced an agreement on a framework for the bill last week.

Senator Pat Toomey of Pennsylvania, who had signed on with the original group of 10 Republicans, released a statement in support of the bill but did not vote.

Democrats only need 10 of these Republicans to vote on final passage of the bill in the Senate, which will pass the Democrat House and be signed by the Democrat President.

The ten GOP Senators who signed onto the gun control deal that included funding for red flag laws:

Republicans who just joined to advance it:

The gun control package advanced with the help of 14 Republican senators contains enhanced background checks for anyone under 21, establishes a federal grant program to encourage states to create ‘red flag’ laws, and increases funding for school safety and mental healthcare.

The vote was designed to speed up passage of the bill in the Senate, perhaps by week’s end, where it will then advance to the House and presumably on to President Biden’s desk.

The BBC reports that the bill represents “the most significant new gun controls in a generation.”

Biden concurs, having described the framework as not going as far as he would have liked but insisting it still “would be the most significant gun safety legislation to pass Congress in decades.”

President Biden says “obviously” the new bipartisan gun proposal “does not do everything that I think is needed, but it reflects important steps in the right direction, and would be the most significant gun safety legislation to pass Congress in decades.”

Republican Senate Leader McConnell heralded the text of the gun control bill advanced by the 14 Republican senators as “a commonsense package of popular steps” that will uphold the Second Amendment rights of law-abiding citizens.

There’s nothing commonsense about ramming through a bill that affects the Constitutional rights of Americans while barely debating it.

The BBC points out that the procedural vote “passed 64 to 34 in less than two hours after the final text was circulated.”

🚨 Breaking 🚨 Within TWO HOURS of releasing bill text, procedural vote allows Senate to take up an unconstitutional gun control package, including 14 Republicans. ⁰⁰Tell your Senators to VOTE NO on final passage of this bill, which will make gun owners second class citizens.

The bill to be voted on includes controversial ‘red flag’ provisions in which grant funding is dangled as a carrot for states to enact such laws.

‘Red flag’ laws allow authorities to confiscate firearms from individuals deemed a risk to themselves or others, without having been convicted of a crime.

The Fifth Amendment protects Americans from being deprived “of life, liberty, or property, without due process of law.”

The bill, according to Fox News, “provides grants for states that implement their own red flag laws and offers additional funding for both school safety measures and mental health services.”

14 Democrats would never join Republicans for any reason.

That said, the text does not include the phrase ‘red flag’ anywhere in it – which may be more a product of semantics than anything else.

Senator John Cornyn (R-TX), the #2 Republican in the Senate, tapped by McConnell to “negotiate” with Democrats on gun control, felt the phrase was too controversial so he changed it to “crisis intervention.”

Cornyn, according to a report by The Hill, insists “that the legislation would not create a national red flag law, adding that states could receive the funding regardless of whether they enact such a program.”

Actual conservatives in Congress have strongly opposed any furthering of ‘red flag’ laws.

Representative Matt Gaetz said backing such gun laws due to an emotional response to a tragedy is a betrayal of the Constitution, which protects the right of Americans to bear arms and to due process.

“You are a traitor to the Constitution, the Second Amendment, the Fifth Amendment, you do nothing to make mass shootings less likely,” he said.

“If you back red-flag laws…you betray your voters, you are a traitor to the constitution, the 2A, the 5A, you do nothing to make mass shootings less likely, and you put a target on the back of your constituents.” pic.twitter.com/D8y2MSt6va

MAGA Representative Lauren Boebert hammered the 14 Republicans and 50 Democrats in Congress who voted on a procedural advancement of the gun control bill.

“Our Second Amendment is under siege by the very people it is supposed to protect us against,” she tweeted.