BREAKING NEWS
GMT+2 07:10
Home Politics Report: Officer Wanted To Save Teacher Wife From Uvalde Classroom But Was Detained And Had His Gun Taken Away 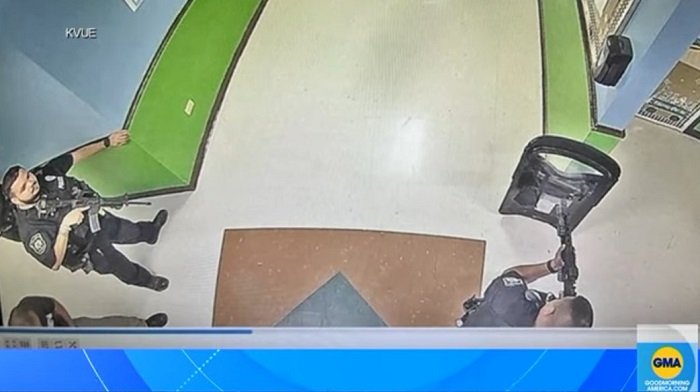 Report: Officer Wanted To Save Teacher Wife From Uvalde Classroom But Was Detained And Had His Gun Taken Away

A police officer whose wife had called him from inside a Uvalde classroom as she lay bleeding heavily during the school shooting a month ago was reportedly detained and had his gun taken away when he tried to save her.

The news marks yet another in a long line of enraging responses by officials during the massacre at Robb Elementary school where a gunman shot and killed 19 children and two teachers.

An analysis of documents and security video by the Texas Tribune earlier this week revealed officers on the scene had the protective equipment and firepower necessary to confront the killer but waited over an hour for orders directing them to do so.

Over a dozen students in the classroom were still alive during that timeframe. Many of the victims were bleeding due to the wounds they suffered. One teacher died while being transported by ambulance.

Breaking: Video and transcripts reviewed by The @TexasTribune of the law enforcement response to the Uvalde school shooting show police officers were equipped to confront the shooter with guns, shields and tools.

The Tribune report contradicts statements from Uvalde police chief Pete Arredondo who, according to a New York Times story on June 9th, advised heavily armed officers on the scene to wait “for protective equipment to lower the risk to law enforcement officers.”

They had the equipment and firepower, security footage shows.

It also contradicted his own statements to the Tribune about trying to get into the classroom doors, something they apparently didn’t attempt to do.

“A debate over whether the locked classroom doors could be breached gave way to the discovery that they may never have been locked at all,” the report revealed.

Sitting outside a classroom with an active shooter for over an hour while the doors may have been unlocked is infuriating enough. It had to be mind-numbingly maddening for Ruben Ruiz of the school district police force.

His wife, Eva Mireles, was a fourth-grade teacher at Uvalde. She called Ruiz to let her know she was bleeding heavily and likely dying.

“She says she is shot,” he told other officers on the scene.

Eva Mireles, a Uvalde teacher who was killed in the shooting, apparently spoke with her husband — a school district police officer — as the incident was unfolding. Crucially, this seems to confirm that police *did* have info on what was going on inside. https://t.co/LvtjdwA6U1

RELATED: NYT Investigation: Over a Dozen Children Were Still Alive In Uvalde Classroom While Police Waited For ‘Protective Equipment’

Her Husband Was Detained

An official with the Texas Department of Public Safety (DPS) told the Tribune that “Ruiz was soon escorted away by other officers on the scene.”

“What happened to him, is he tried to move forward into the hallway,” McCraw said. “He was detained and they took his gun away from him and escorted him off the scene.”

Mireles later died from her injuries.

Wow. Eva Mireles, a Uvalde teacher, called her husband and told him she had been shot and was dying.

Her husband, a police officer, tried to take down the shooter but was detained by other officers and had his gun taken away. https://t.co/fPgfra6n5z

It is unclear – and McCraw did not reveal it – who had Ruiz detained and removed or what agency they worked for.

The latest update is obscene.

An armed officer trained to stop an active shooter, with protective equipment on hand and a potentially unlocked door in front of him, who had more motivation than those around him to stop the carnage, was arrested and disarmed long before the actual shooter was.

McCraw also referred to the police response to the Uvalde shooting as “an abject failure” Tuesday and suggested the shooter could have been taken down in minutes.

“Three minutes after the subject entered the west hallway, there was sufficient number of armed officers wearing body armor, to isolate distract and neutralize the subject,” he told a State Senate committee.

McCraw says that within three minutes of the shooter entering Robb Elementary, there were nine officers with rifles and pistols.

He also said the officers inside never tried the door handle leading to the classroom where shooter was. He believes the door was never locked.

McCraw indicated one officer on the scene should have been enough for Arredondo to green light an attempt to take down the shooter.

“You don’t wait for a SWAT team. If you got one officer’s that enough. You don’t have to wait for 11, or 12, or 15 or 30. One’s enough,” McCraw stated. “If you’re there on the scene, you have an obligation to go and immediately engage the shooter, and really, stop the killing.”

“That’s preached, practiced and required in the state of Texas,” he added.

Ruiz may have been the one who could have stopped the shooter and reduced the excruciatingly long timeframe in which students and his wife, as well as another teacher, were bleeding in that Uvalde classroom.

And he was detained instead.

The incompetence, in this case, is nearly unbelievable.