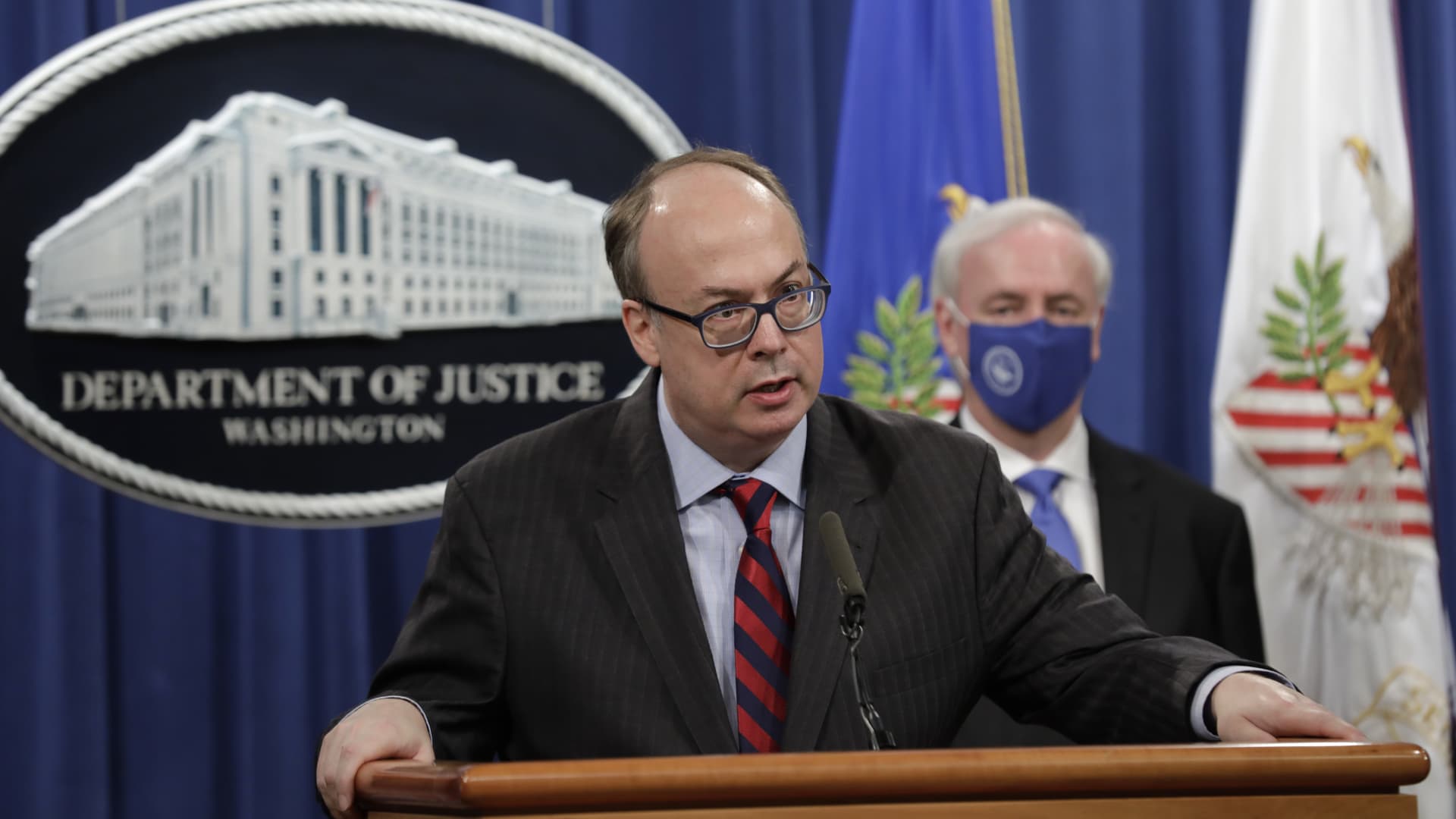 Acting Assistant U.S. Attorney General Jeffrey Clark speaks next to Deputy U.S. Attorney General Jeffrey Rosen at a news conference, where they announced that Purdue Pharma LP has agreed to plead guilty to criminal charges over the handling of its addictive prescription opioid OxyContin at the Justice Department on October 21, 2020 in Washington, DC.

Federal agents on Wednesday visited the Virginia home of Jeffrey Clark, who as a top Department of Justice official was part of a plan by then-President Donald Trump to overturn the results of the 2020 election.

The head of the Center for Renewing America, where Clark is a fellow, in a statement called the visit “a pre-dawn raid” by “more than a dozen DOJ law enforcement officials” who seized Clark’s electronic devices as he stood outside on the street in his pajamas.

The unusual visit came a day before the House committee investigating the Jan. 6, 2021, riot at the U.S. Capitol was set to hear, among other matters, details surrounding Clark’s role in Trump’s campaign to pressure DOJ officials toss out President Joe Biden’s win.

ABC News, which cited multiple sources with knowledge of what that outlet called a search at Clark’s home in the town of Lorton, also reported that a neighbor saw FBI agents entering and exiting that residence early Wednesday.

A spokesperson for the U.S. Attorney’s Office in Washington, D.C., confirmed to NBC News that federal law enforcement agents were at Clark’s home Wednesday. But the spokesperson did not say why agents conducted the visit.

News of the unusual visit broke hours before the House panel investigating the attack on the U.S. Capitol was set to hold a public hearing on Trump’s pressure on DOJ.

The committee intends to show how Trump planned to install Clark, who at the time was an environmental lawyer at DOJ, as his new acting attorney general to help spread the false claim that Biden’s win was the result of widespread ballot fraud in a handful of swing states.

The panel also expects to hear that Trump’s plan was thwarted when senior DOJ officials threatened to quit if Clark was put in charge of the department.

The New York Times, citing sources, reported in late January 2021 that Clark had pushed top DOJ officials to help Trump reverse his defeat in the election and that he had secretly met with Trump without the knowledge of acting Attorney General Jeffrey Rosen.

Russ Vought, a former director of the federal Office of Management and Budget and the president of the Center for Renewing America, called on “patriots” to support Clark, according to a statement obtained by NBC News.

“The new era of criminalizing politics is worsening in the U.S. Yesterday, more than a dozen DOJ law enforcement officials searched Jeff Clark’s house in a pre-dawn raid, put him in the streets in his pajamas, and took his electronic devices,” Vought said in the statement.

“All because Jeff saw fit to investigate voter fraud. This is not America, folks.”