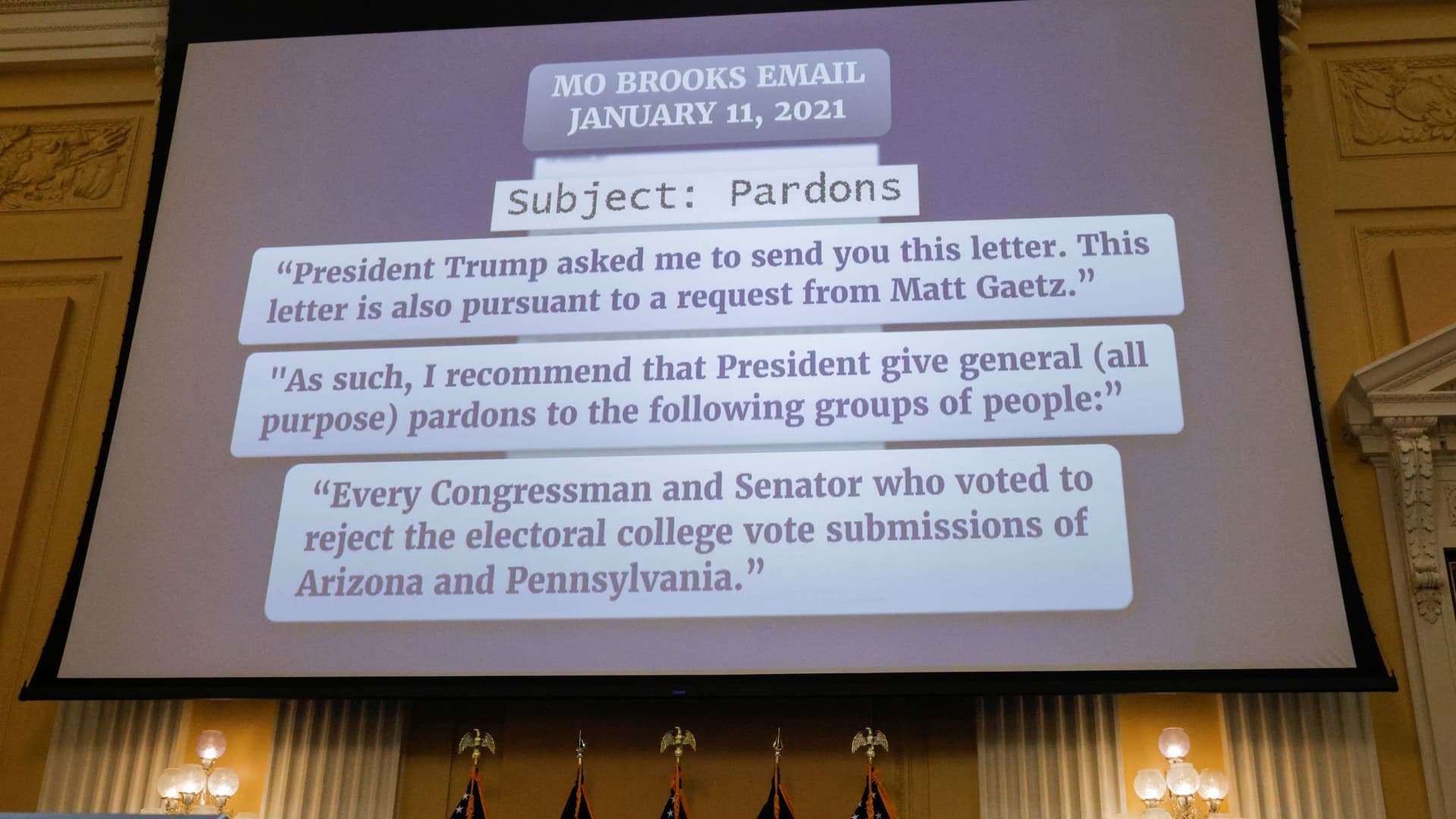 Up to a half-dozen Republicans lawmakers who strongly supported then-President Donald Trump‘s false claims of ballot fraud in the 2020 election sought pardons from him in the wake of the Jan. 6, 2021, Capitol riot, according to testimony and evidence presented Thursday at the House select committee investigating the attack.

Trump also talked about issuing so-called blanket pardons to members of his family and White House staff before leaving office in January 2021, according to videotaped testimony by former White House aide John McEntee.

“The only reason I know to ask for a pardon is because you think you’ve committed a crime,” said Rep. Adam Kinzinger of Illinois, one of two Republicans on the panel investigating the Capitol riot, said at the end of the hearing.

Five GOP House members requested pardons from Trump through the office of White House Chief of Staff Mark Meadows, according to videotaped testimony from Cassidy Hutchinson, a former Meadows aide.

Excerpts from an email by U.S. Rep. Mo Brooks (R-AL) to former White House Chief of Staff Mark Meadows asking for pardons for members of Congress are shown on a screen during the fifth public hearing of the U.S. House Select Committee to Investigate the January 6 Attack on the United States Capitol, on Capitol Hill in Washington, U.S., June 23, 2022.

Hutchinson also testified that she heard that Rep. Marjorie Taylor Greene of Georgia had asked the White House counsel’s office for a pardon.

In a Jan. 11, 2021, email to the White House that was displayed at Thursday’s hearing, Brooks not only asked for pardons for himself and Gaetz, but also for “every Congressman and Senator who voted to reject the electoral college submission of Arizona and Pennsylvania” five days earlier, on Jan. 6.

It was on Jan. 6 that a special joint session of Congress convened to confirm the Electoral College victory of President Joe Biden was suspended for hours after a violent mob of Trump supporters who forced their way into the Capitol and swarmed through the halls of Congress.

Gaetz had begun seeking a pardon in December 2020, according to Hutchinson, who added, “I’m not sure why.”

A video displays a discussion about Presidential pardons during the fifth hearing by the House Select Committee to Investigate the January 6th Attack on the U.S. Capitol in the Cannon House Office Building on June 23, 2022 in Washington, DC.

Former White House lawyer Eric Herschmann, in his own videotaped testimony, said about Gaetz’s request, “The general tone was ‘we may be prosecuted because we were defensive of the president’s position on these things.’ “

“The pardon he was requesting was as broad as you could describe, from the beginning of time, up until today, for any and all things,” Herschmann said.

Gaetz, who remains under a criminal investigation by the U.S. Justice Department in a probe related to possible sex trafficking of an underage girl, blasted the Jan. 6 committee in a tweet after the hearing.

But his office did not answer NBC News when asked if he had sought a pardon from Trump.

“The January 6 Committee is an unconstitutional political sideshow,” Gaetz tweeted. “It is rapidly losing the interest of the American people and now resorts to siccing federal law enforcement on political opponents.

Greene’s office likewise did not explicitly deny whether she sought a pardon, but referred NBC to a tweet she posted on the heels of Hutchinson’s testimony being shown.

“Saying ‘I heard’ means you don’t know,” Greene wrote. “Spreading gossip and lies is exactly what the January 6th Witch Hunt Committee is all about.”

A video of US Representative Mo Brooks (R-AL) is shown on a screen during the fifth hearing by the House Select Committee to Investigate the January 6th Attack on the US Capitol in the Cannon House Office Building in Washington, DC, on June 23, 2022.

McEntee was asked in his videotaped testimony about whether Trump considered contemplating issuing blanket pardons to anyone involved in Jan. 6.

“I had heard that mentioned,” McEntee said.

“I know he had hinted at a blanket pardon for the Jan. 6 thing for anybody, but I think he had for all the staff and everyone involved,” McEntee answered. “Not with Jan. 6, but just before he left office, I know he had talked about that,” McEntee said.