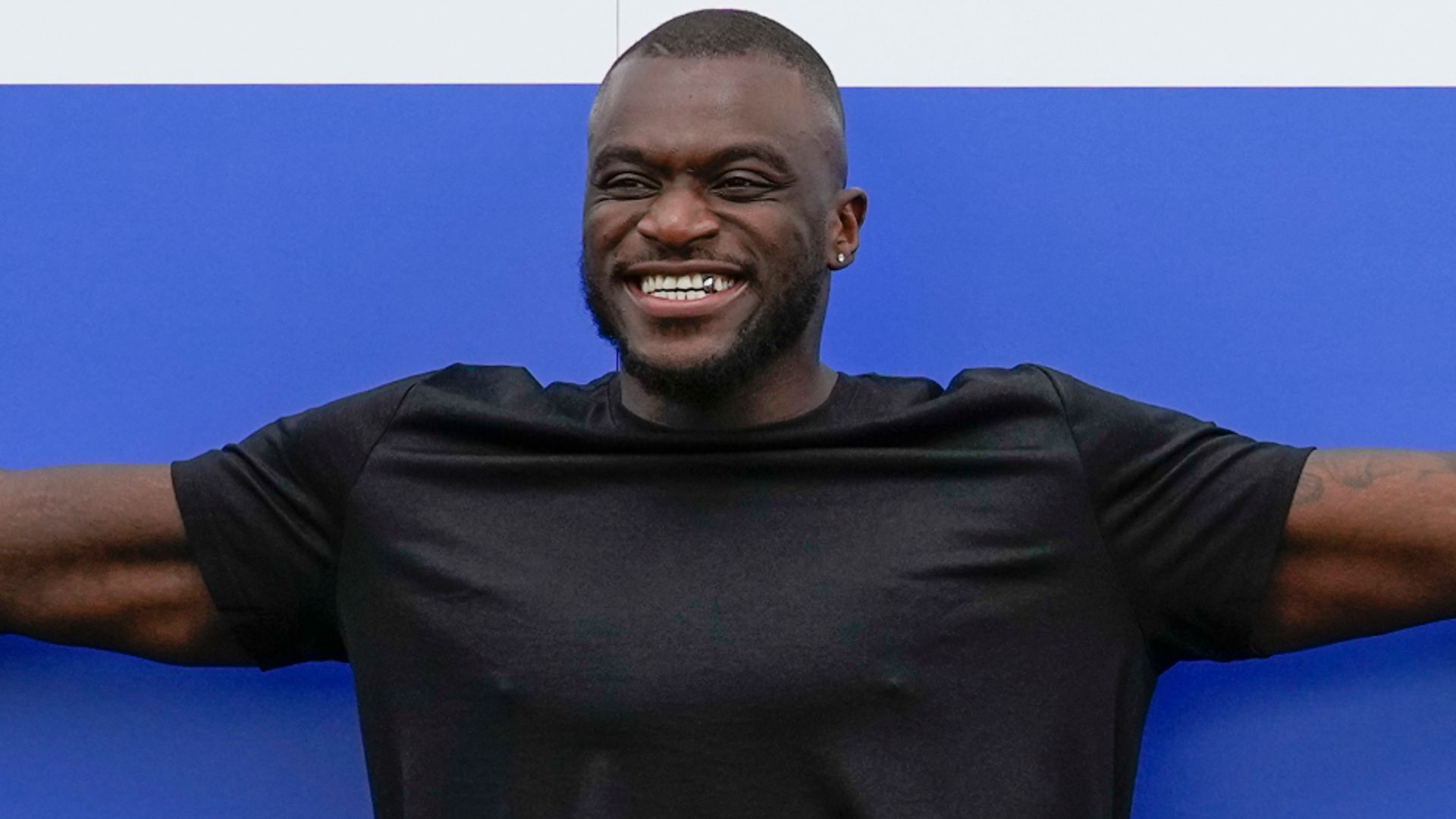 ‘NFL part of British culture – I was recognised in Tesco!’ 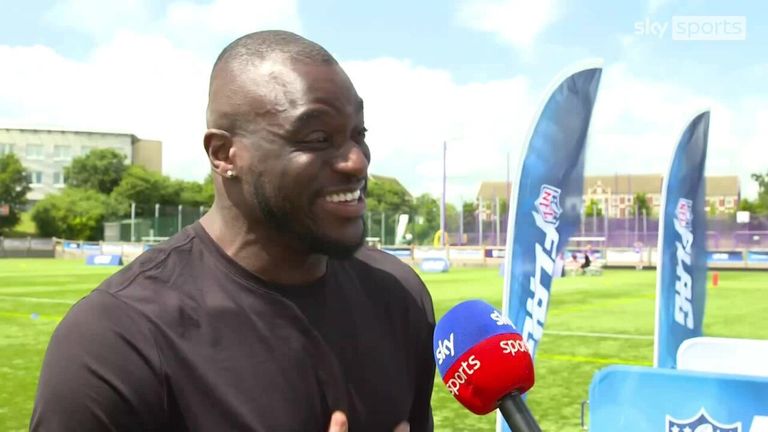 Washington Commanders defensive end Efe Obada says his status in the UK is growing with people recognising him while he does his shopping!

Washington Commanders defensive end Efe Obada says his status in the UK is growing with people recognising him while he does his shopping!

The NFL’s growth in the UK can be measured in TV figures, in ticket sales, in jerseys purchased, in Flag Football participation, in social media following, or in Efe Obada’s case – supermarket recognition.

Obada and his fellow International Player Pathway products are often quizzed on whether they wished they had been introduced to football as early as children as in the States; the answer is yes, always, unequivocally, yes.

A croaky voice from coaching and interacting was the outcome, and a telling sign as to his investment in bridging the gap.

“I’m excited, it wasn’t around, having this exposure at this age to a game that’s changed my life, just envisioning the opportunities it can have for these kids, to streamline them from going from here to the NFL, it’s exciting to watch,” Obada told Sky Sports.

“What’s really exciting about coming home now is the NFL is becoming part of British culture, and it’s so exciting to see. This wasn’t real, this wasn’t a thing.

“Now we’re in Loughborough, the Academy is going to be here, the IPP programme, the London games, Flag Football, and I’m being recognised.

They represent one of 300 schools playing Flag Football across the country, with the non-contact version of the game aggressively pursuing inclusion at the 2028 Olympic Games in Los Angeles.

Might Obada be tempted by a potential shot at a gold medal? He admits he might be too big, though jokes he could be a quarterback.

“I do think it should be an Olympic sport, yes,” says Obada, who hails flag football as a necessary ‘stepping stone’.

“There were times in my early years when I wish I had that opportunity, because it was such a condensed growth I needed to make, I wish I went to college and was able to develop my style of play.”

He puts emphasis on the ‘options’ it provides. Options he and others may not have had when he was the age of those competing at Loughborough.

Super Bowl-winning quarterback Russell Wilson, who will lead the Denver Broncos out against the Jacksonville Jaguars at Wembley this coming season, was present on the day as an NFL Flag ambassador.

If thousands of fans queuing to meet him at Carnaby Street on Tuesday fell short of amplifying the NFL’s popularity in the UK, the a day of flag football will have done the trick.

“It’s been amazing seeing the growth of NFL flag, I went to China, I’ve been to Brazil, been to London a couple of times,” he told Sky Sports.

“[It’s great] just to be here, and watching all these amazing kids playing football and how much they’ve been loving this game.

“The amazing thing is when I was in Brazil I had these kids say to me, ‘when we watch this game it’s hard for us to play’ and I said, ‘what do you mean?’ They said, ‘well it’s expensive, helmet, shoulder pads, all things like that’. And it hit me, flag football, globally, it will teach everybody.

“It’s been cool to be able to create this opportunity for kids all over the world.”

Few have been as closely associated to the NFL’s ascent in the UK than Jason Bell, who cites former New York Giants team-mate Osi Umenyiora playing in the inaugural London game in 2007 as a reflection of the league’s long-standing place on the British sporting landscape.

By now he is no longer surprised by the depth of knowledge.

“These kids they play the video games, they know about these complex plays and how things are happening,” he told Sky Sports.

“I watch one team out there, they had all their plays on their wristband. I was like, ‘I didn’t have that in high school, I was out there winging it!’

“You see they understand the game because they play it, they watch it, they’re engaged in it, so when they go out there they’re just so familiar with what’s happening.

“I tried to get a lot of them to laugh today but they were too serious about the game, so I was like, ‘I’m going to back off, I get it!'” 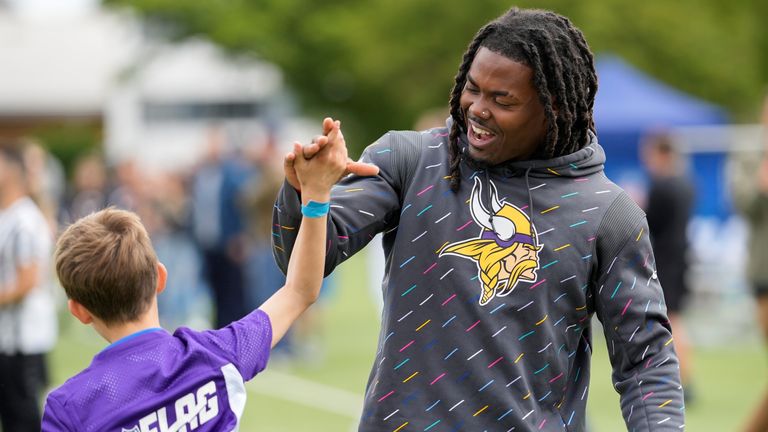 Bell encouraged the eventual addition of Flag Football to the Olympics and believes it beckons as another significant bow to the league’s international ventures.

“Anything you can adapt to easily that can become an Olympic sport, you need to be able to pick up a ball and go. That’s what flag allows you to do, you just pick up a ball, have a field and you can go.

“I think now because of the way you can look online at the passing game and how that occurs and people can look at highlights anywhere in the world you can look at what players do and mimic that.

“I think that’s what’s going to help the growth of the game as far as flag is concerned and give us the opportunity to be in the Olympics.

“Now the NFL is going to have to keep pushing for it internationally with NFL Flag, but that is the key, that is the driver, even in youth sports.”

‘The next generation of fans and players’

New NFL UK General Manager Henry Hodgson, who has been based at the NFL’s Los Angeles office for the last 12 years, has been an instrumental figure in driving the league’s growth overseas.

He takes up his post in London with the game’s presence in a place he admits he ‘could have only dreamed of’ at the very beginning.

“The flag event, this is the next generation of fans I think,” Hodgson told Sky Sports. “You know how much kids playing the sport gets them into it so these guys have got a great opportunity first of all to represent the UK at the Pro Bowl whoever wins which is exciting.

“But even more than that they’re going to be the next generation of fans and players.

“The Academy here yesterday was here for their trials as well, again another great programme that will help move the sport forward in the UK and Europe given there are players from all over Europe as well.

“Just seeing that pipeline of kids that can get to college, hopefully some of them make it to the NFL is very exciting.

“We could only dream of getting here, but I think there’s a lot of growth to be had and we want to continue growing NFL fans around the UK and keep the momentum.”