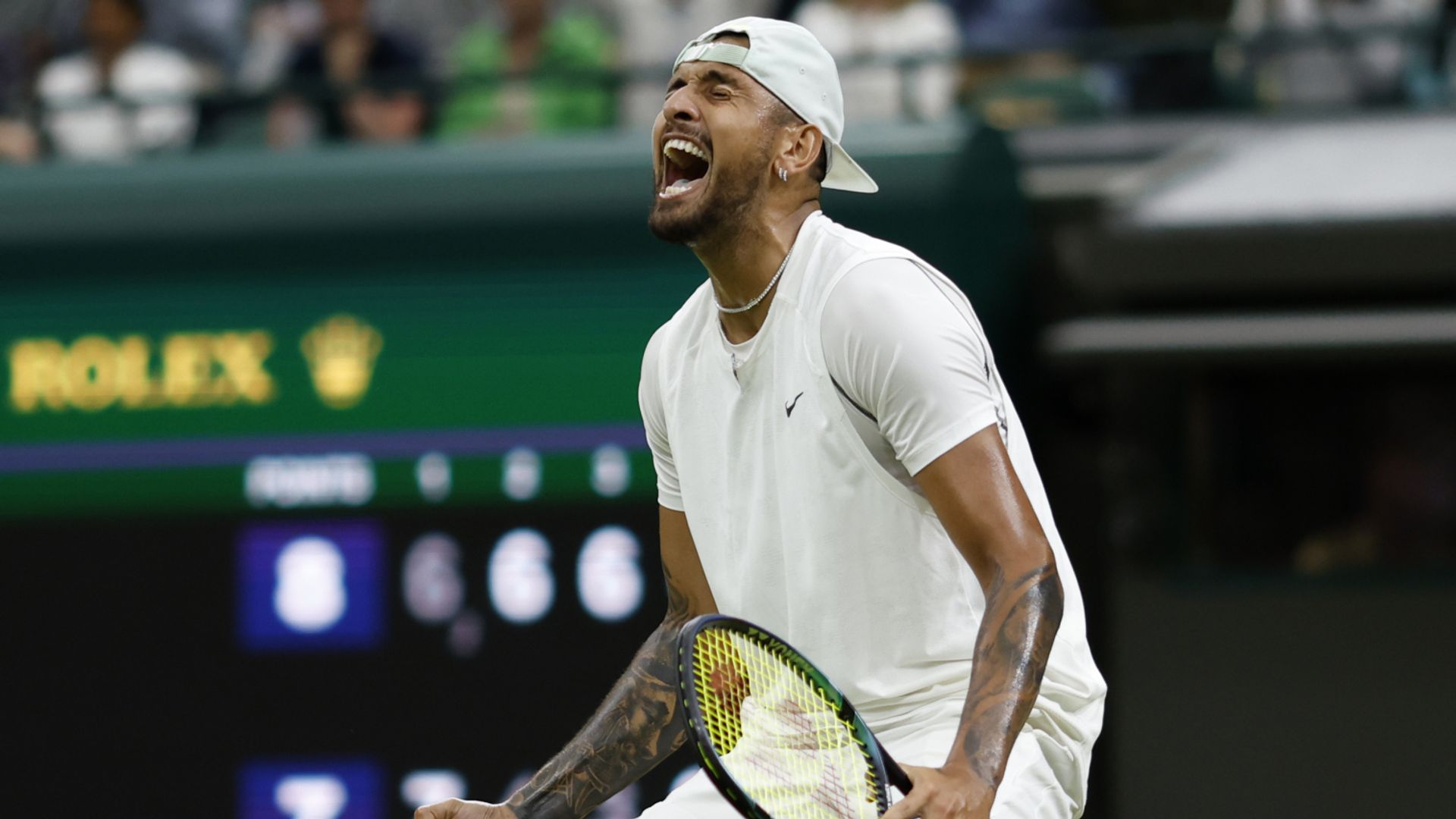 Australian maverick Nick Kyrgios knocked out fourth seed Stefanos Tsitsipas in a wild and wonderful Wimbledon third-round slugfest that threatened to spiral out of control on Saturday; Rafael Nadal advanced to the fourth round with a rather more straight-forward win

Nick Kyrgios knocked out fourth seed Stefanos Tsitsipas in a dramatic and controversial showdown on a raucous No 1 Court on Saturday night.

The maverick Australian recovered from losing a first-set tie-break to win 6-7 (2-7) 6-4 6-3 7-6 (9-7) to win a match featuring code violations, a point penalty and numerous rows with officials.

At one point Kyrgios even demanded his opponent be defaulted for smashing a ball into the crowd in a bad-tempered affair.

Tsitsipas accused Kyrgios of being a bully and possessing an “evil side” in his post-match press conference.

He said: “It’s constant bullying, that’s what he does. He bullies the opponents. He was probably a bully at school himself. I don’t like bullies. I don’t like people that put other people down.

“He has some good traits in his character, as well. But he also has a very evil side to him, which if it’s exposed, it can really do a lot of harm and bad to the people around him.”

“I just don’t understand what I did. Like I did nothing towards him. I didn’t think I was aggressive towards him.

“I wasn’t hitting balls at his face. I don’t know. I didn’t feel like there was any anger.

“I had no anger towards Stef today on the match. I don’t know where it’s coming from, to be honest.

“If he’s affected by that today, then that’s what’s holding him back. I just think it’s soft.”

A chaotic encounter began in relative calm with Kyrgios putting in a near-flawless display of serving – including an under-armer between the legs – in the first set.

Kyrgios had dropped just four points behind his serve, only to lose his way in the tie-break as Tsitsipas edged ahead.

However, in between time Kyrgios demanded a new line judge following one bad call and complained to spectators about another official before serving, at one point prompting Tsitsipas to walk back to his towel amid pantomime boos from the crowd.

Kyrgios received a code violation at 5-4 in the second for swearing followed by a stunning winner from a Tsitsipas overhead to level up.

The sublime immediately returned to the utterly ridiculous, Tsitsipas angrily hitting a ball into the stands to earn a warning of his own, and Kyrgios insisting he be defaulted.

While Kyrgios argued with all and sundry, Tsitsipas took a bathroom break, came back out and complained about the positioning of the towels.

Tsitsipas lost his head completely when Kyrgios held with another underarm serve, lashing out at the ball to earn a point deduction.

The Australian was soon bowing to the crowd after landing a drop shot on top of the net, before it fell Tsitsipas’ side to help clinch the third set and sum up the Greek’s luck.

With the clock ticking towards 9pm, the roof was closed and when hostilities resumed Kyrgios crashed down an ace to take the fourth set to another tie-break.

It was a scintillating climax finished by a drop shot, a wild celebration and confirmation that the Kyrgios roadshow will rumble into the second week.

The two-time Wimbledon champion had dropped sets in each of his first two victories at the All England Club this year but had no such problems against the 27th seed on Centre Court.

Nadal was breezing into the fourth round until Sonego successfully managed to get the roof closed while he trailed 4-2 in the third set.

The Italian then broke the 22-time major winner to love under the lights, but an irate Nadal hit straight back before serving the match out to keep his calendar year Grand Slam bid on track.

Cristian Garin reached the fourth round for the second straight year with a 6-2 6-3 1-6 6-4 victory over 29th-seeded Jenson Brooksby.

The 26-year-old Garin, who is ranked 43rd, said he appreciated the chanting from his compatriots in the stands on No 3 Court: “When I hear that, I know that the Chileans are (here) somewhere, so that’s good.”

Join us for coverage from the All England Club with our daily live blog through skysports.com/tennis our Twitter account @skysportstennis & Sky Sports – on the go! Available to download now on – iPhone & iPad and Android