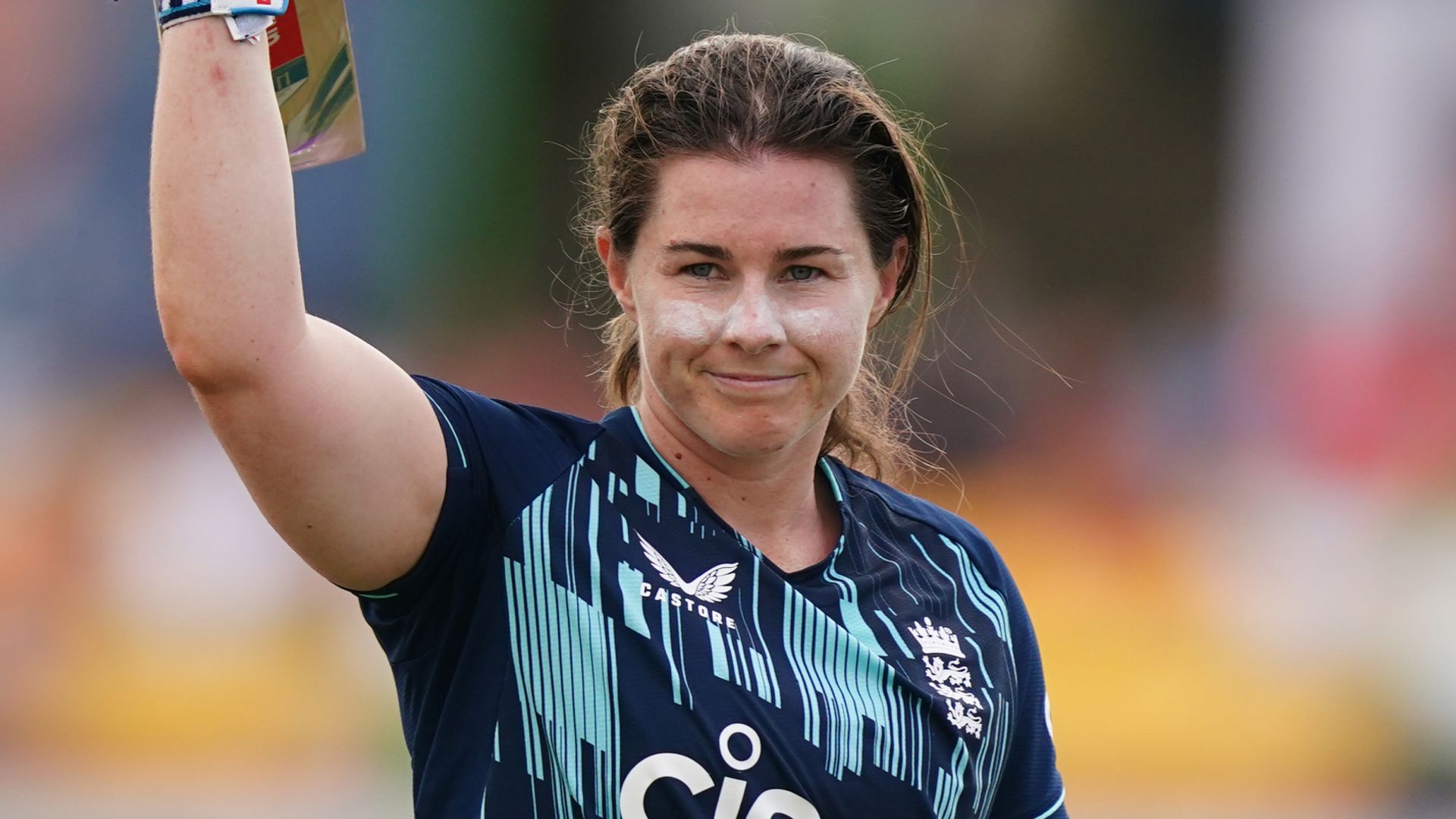 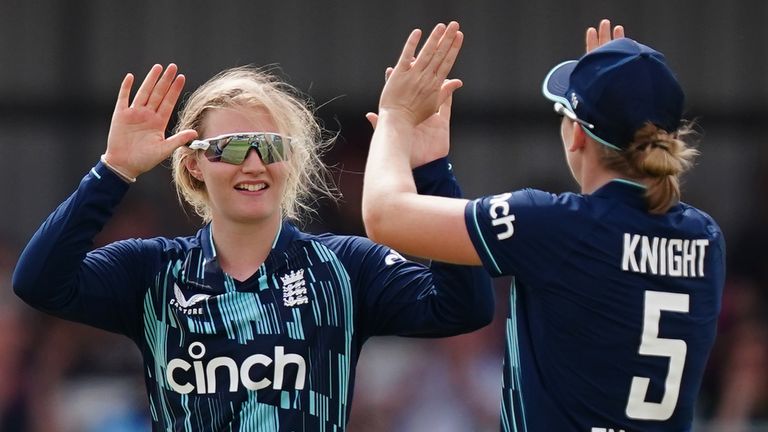 England wrapped up a 3-0 sweep of South Africa with a 109-run win in the third one-day international in Leicester – a victory that also sees the hosts take an unassailable 8-2 lead in the multi-format series.

Tammy Beaumont (119 off 107) struck a superb ninth ODI century as England posted a massive 371-7 when batting first in the searing heat, their total just seven runs shy of their record 50-over score.

South Africa made a good fist of the chase on a belting batting track – Laura Wolvaardt (56 off 51), Marizanne Kapp (62 off 54) and Chloe Tryon (70 off 57) all hitting eye-catching half centuries – before eventually subsiding to 262 all out in 45.4 overs. 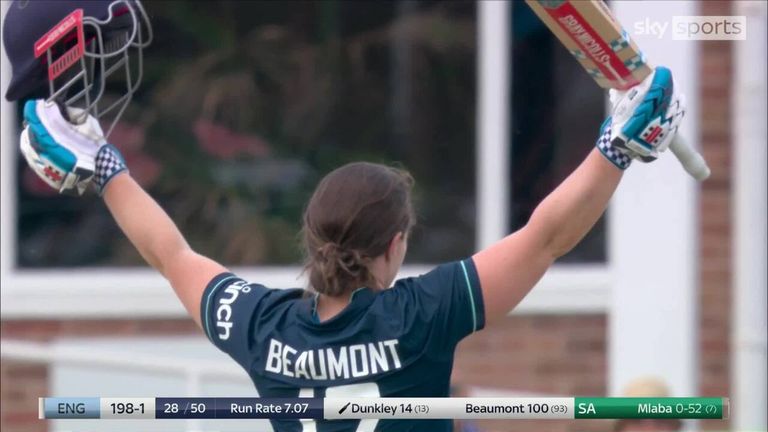 In an England team shorn of the rested Sophie Ecclestone, spin twins Charlie Dean (3-42) and Emma Lamb (3-42) acquitted themselves brilliantly in her absence, the latter claiming her maiden ODI wicket in the process. 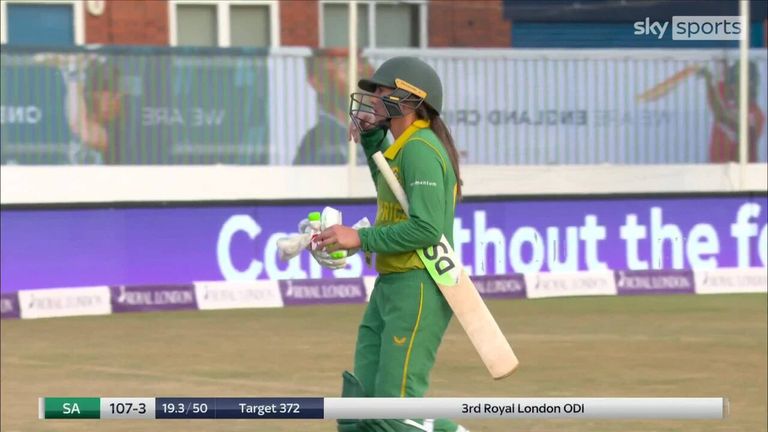 Alice Davidson-Richards (3-35), in for Nat Svicer (also rested) in England’s only other change, also took her first wicket in ODI cricket, four years on from her debut and only previous appearance.

England’s victory means that South Africa, at best, can only share the multi-format series provided they win all three of the upcoming T20 internationals, the series getting under way on Thursday evening live on Sky Sports.

With the country in the midst of a heatwave, South Africa’s decision to secure themselves 50 overs in the field by opting to bowl first at the toss was a hugely surprising one. And almost immediately they may have begun to regret their decision as Beaumont and Lamb shared in a century opening stand for the second-straight game.

Not helping the touring side’s cause was a hat-trick of costly errors in the field in the space of three balls. Lamb and Beaumont were both dropped off consecutive deliveries, when on 54 and 50 respectively, while the former should then have been run out but for a fumble behind the stumps by Trisha Chetty. 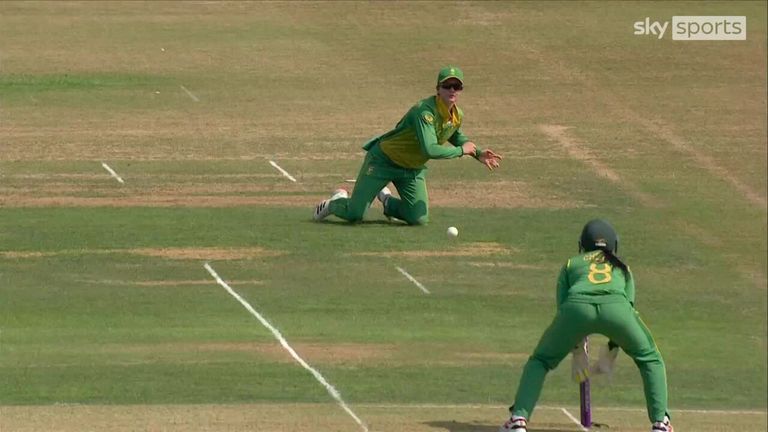 Lamb did eventually depart for 65 soon after, but Beaumont made the Proteas pay for the reprieve as she piled on the runs, striking 19 boundaries and one six in her subline innings.

The England opener eventually perished to Nonkululeko Mlaba (1-68), Chetty atoning somewhat for her earlier error with a sharp stumping, but Sophia Dunkley (51 off 53) and Heather Knight (63 off 49) kept their foot on the gas. 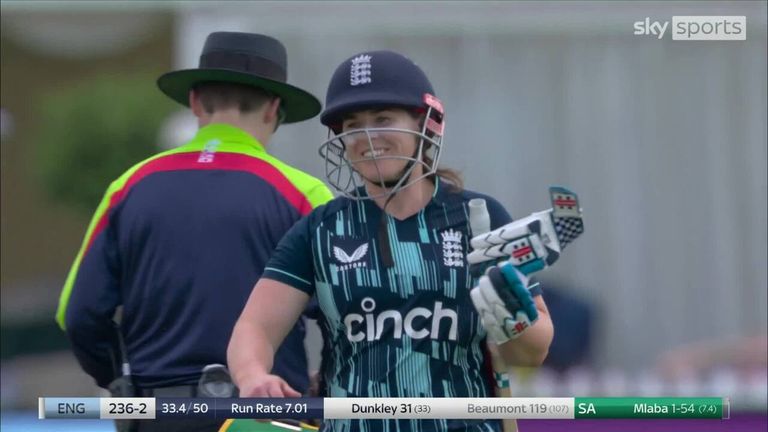 Dunkley departed shortly after bringing up a fourth ODI fifty, off the back of her maiden century in the second ODI, but Danni Wyatt (33) then came in and played some sparkling shots in a fine 14-ball cameo.

With only 12 required off the final over to see England post a new record ODI score, sadly the innings somewhat sputtered to a finish as Knight was run out and Dean fell lbw off the first two balls. 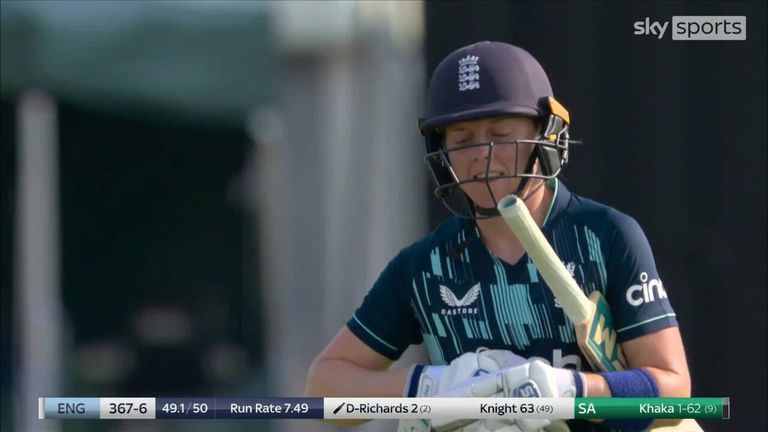 South Africa showed good, attacking intent early on in their chase, Wolvaardt in particular as she dominated a 61-run opening stand in the first eight overs before Andrie Steyn (12) was bowled by Dean with her first ball.

The off-spinner added the key wicket of Wolvaardt lbw later in an impressive opening spell, while Lamb and Davidson-Richards then claimed their maiden ODI scalps within the space of an over of each other – Sune Luus bowled for nine and Lauren Bell taking a terrific diving catch at mid-on to see the back of Lara Goodall (24). 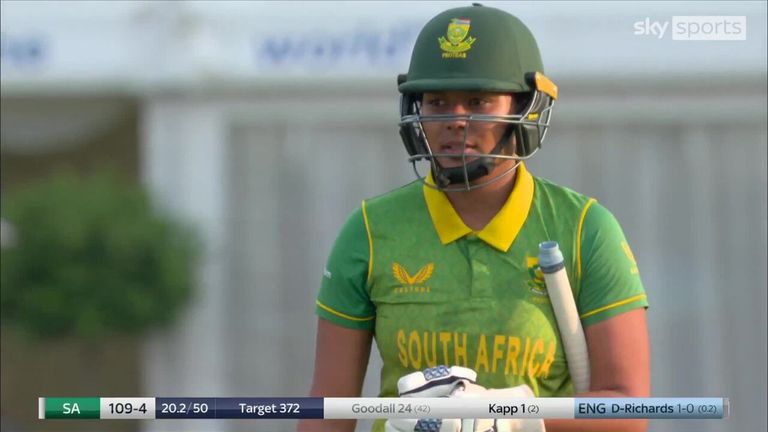 The innings looked in danger of subsiding, only for Kapp and Tryon to then share in a sublime century stand for the fifth wicket that briefly raised hopes of a stunning South African triumph.

But, as the required run-rate climbed above 10 an over, the pair ultimately perished in the deep when attempting to find the boundary and England swiftly ran through the tail thereafter to clinch another convincing victory.

Knight: We’ve blown them out of the park

England captain, Heather Knight: “It’s really pleasing; we came away from the World Cup and challenged the girls to be better in a few areas and I think we’ve blown them out of the park! 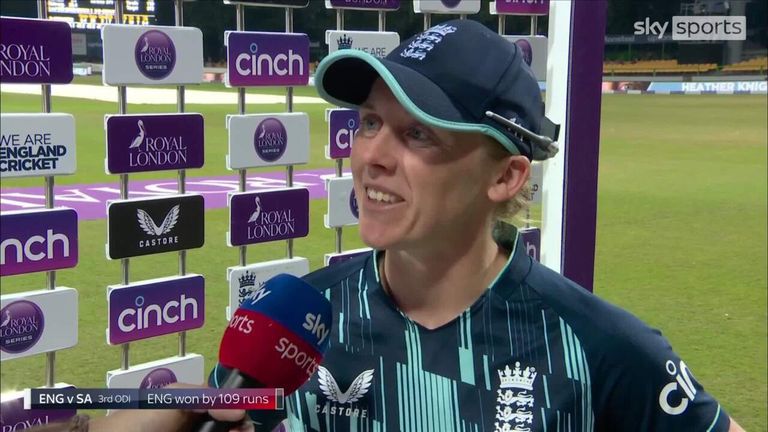 England Women’s captain Heather Knight says she’s thrilled with the performance the team put on and hopes they continue the momentum.

England Women’s captain Heather Knight says she’s thrilled with the performance the team put on and hopes they continue the momentum.

“We have been able to rotate a little bit and still win quite convincingly. It was a pretty good bench we had today so it has been really nice and pleasing as captain.

“Tammy was outstanding today and showed what a world-class player she is in one-day cricket.”

England offspinner, Charlie Dean: “I missed having Eccles [Sophie Ecclestone] out there today but hopefully I stepped up as the senior spinner. I really enjoyed it. 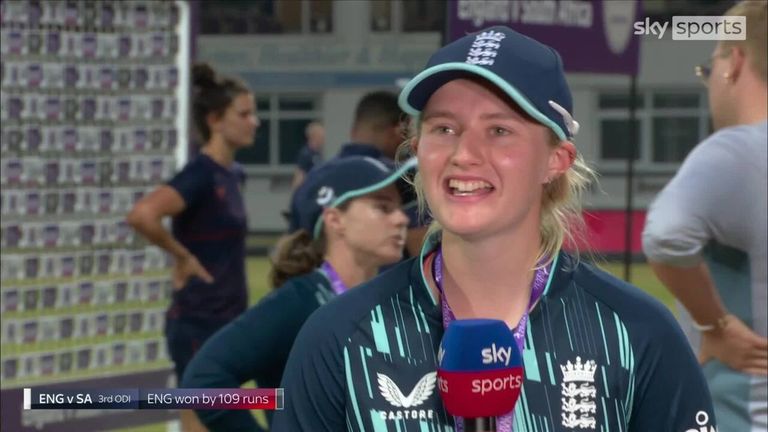 Charlie Dean says she enjoyed the challenge of proving herself as the senior spinner in the third ODI game between England and South Africa.

Charlie Dean says she enjoyed the challenge of proving herself as the senior spinner in the third ODI game between England and South Africa.

“I definitely felt a bit of pressure there to stand up and be a senior player. It was definitely different but I really enjoyed the challenge.

“I think to have those wickets under my belt is pretty special and I am proud.”

Watch the first T20 international between England and South Africa, live on Sky Sports Cricket on Thursday. Coverage begins at 6.30pm, with the first ball at 7pm.