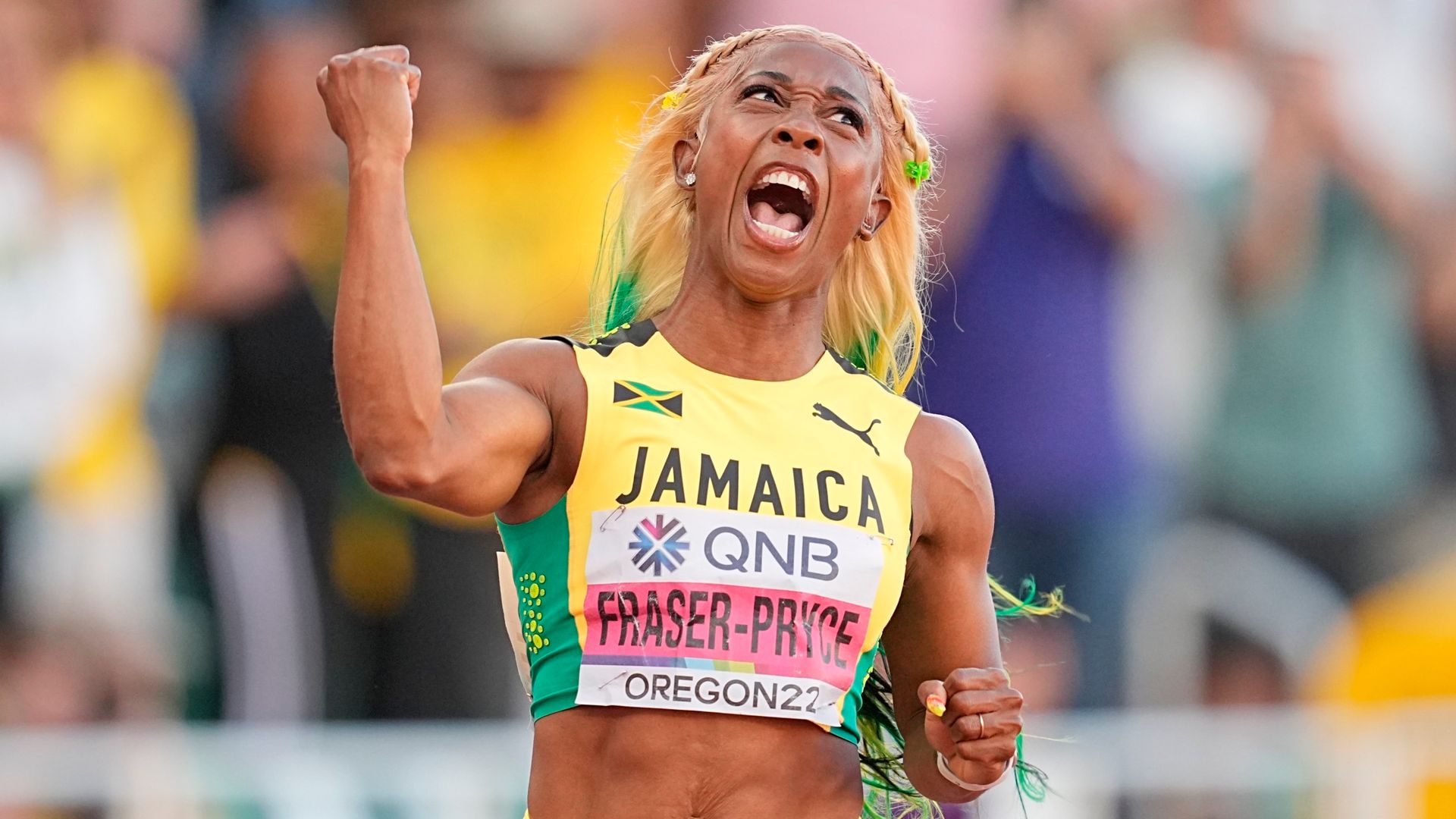 Shelly-Ann Fraser-Pryce clocked the sixth-fastest time in history as she led a Jamaica 1-2-3 in Eugene; Great Britain’s Dina Asher-Smith equalled her national 100m record, but had to settle for fourth; Elsewhere, there was frustration for Katarina Johnson-Thompson in the heptathlon

Shelly-Ann Fraser-Pryce wants to continue to inspire generations of women after securing a fifth 100m title at the World Championships.

The 35-year-old defended her 2019 crown in Eugene, Oregon, on Sunday evening with a championship record of 10.67 seconds – the sixth fastest time in history.

Fraser-Pryce came home ahead of Jamaica team-mates Shericka Jackson and Elaine Thompson-Herah, with Great Britain’s Dina Asher-Smith fourth, and hopes her achievements serve as inspiration for others. 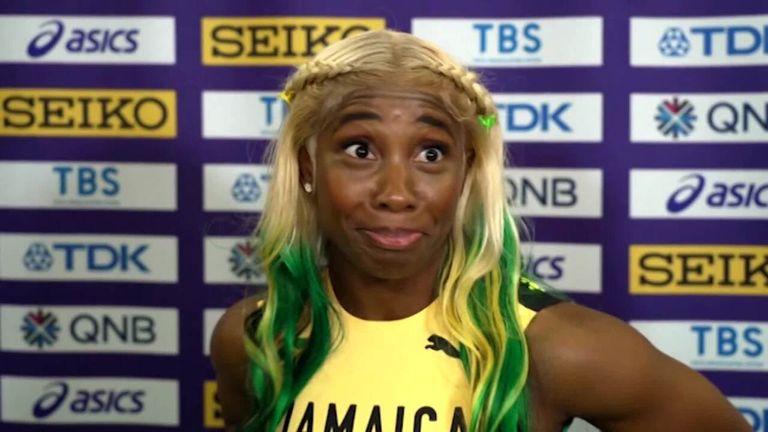 Shelly-Ann Fraser-Pryce says she thinks of her age as a ‘positive’ after she won her fifth World 100 meter title topping a Jamaican sweep in Oregon.

Shelly-Ann Fraser-Pryce says she thinks of her age as a ‘positive’ after she won her fifth World 100 meter title topping a Jamaican sweep in Oregon.

“I feel blessed to have this talent and to continue to do it at 35, having a baby, still going, and hopefully inspiring women that they can make their own journey,” said Fraser-Pryce, having returned after the birth of her son Zyon in 2017 to become the oldest woman to claim a 100m world title in 2019.

“I can’t even imagine the amount of times I’ve had setbacks and I’ve bounced back and I’m here again. I continue to remind myself that sometimes it’s not because you don’t have the ability but it’s the right time. It was the right time and I’m so, so grateful for the continuous support.”

Asher-Smith had hinted pre-Championships she had been keeping something back for Eugene and equalled her national record of 10.83 seconds with her run in the final.

Yet the 26-year-old still narrowly missed out on a podium place, meaning she was unable to add to the 100m silver medal she won at the last World Championships three years ago.

“This performance is phenomenal for me, and I’ve had a fantastic championships,” Asher-Smith said. “I really couldn’t fault it but I’m so gutted that it didn’t get me on the podium. I was so close, but that’s just champs – I’m upset.

“I needed to make sure my mind was actually in the race rather than with my family or here. I’m happy that I was able to push out the performances that I know I was capable of.

“We’re looking to keep going faster throughout the summer into Commonwealths and Europeans. But I definitely came here with an eye to get onto the podium.”

Asher-Smith now turns her attention to the defence of her 200m title, which starts on Monday evening at Hayward Field.

Frustration for Johnson-Thompson in heptathlon

Defending champion Katarina Johnson-Thompson revealed her frustration at failing to challenge for medals after day one of the heptathlon.

The 29-year-old sits sixth with little hope of retaining her title at the World Championships in Eugene, trailing leader and Olympic champion Nafi Thiam by 273 points and lies 193 points adrift of the podium places.

Injuries and a late change of coach have left Johnson-Thompson, who has 3798 points, playing catch-up and disappointed.

“It’s not nice, it’s not a place where I want to be at a Championships, especially as I know I can do so much better historically, and I think I could have done better with a few tweaks. I’m proud of just being here,” Johnson-Thompson said.

“I got back into really hard training in the last six weeks but unfortunately I haven’t come out of the other side in the place I wanted to be.

“I’m still here, I’m still fighting, and this is part of what I’m trying to do at this championships – be here, fight and be competitive.”