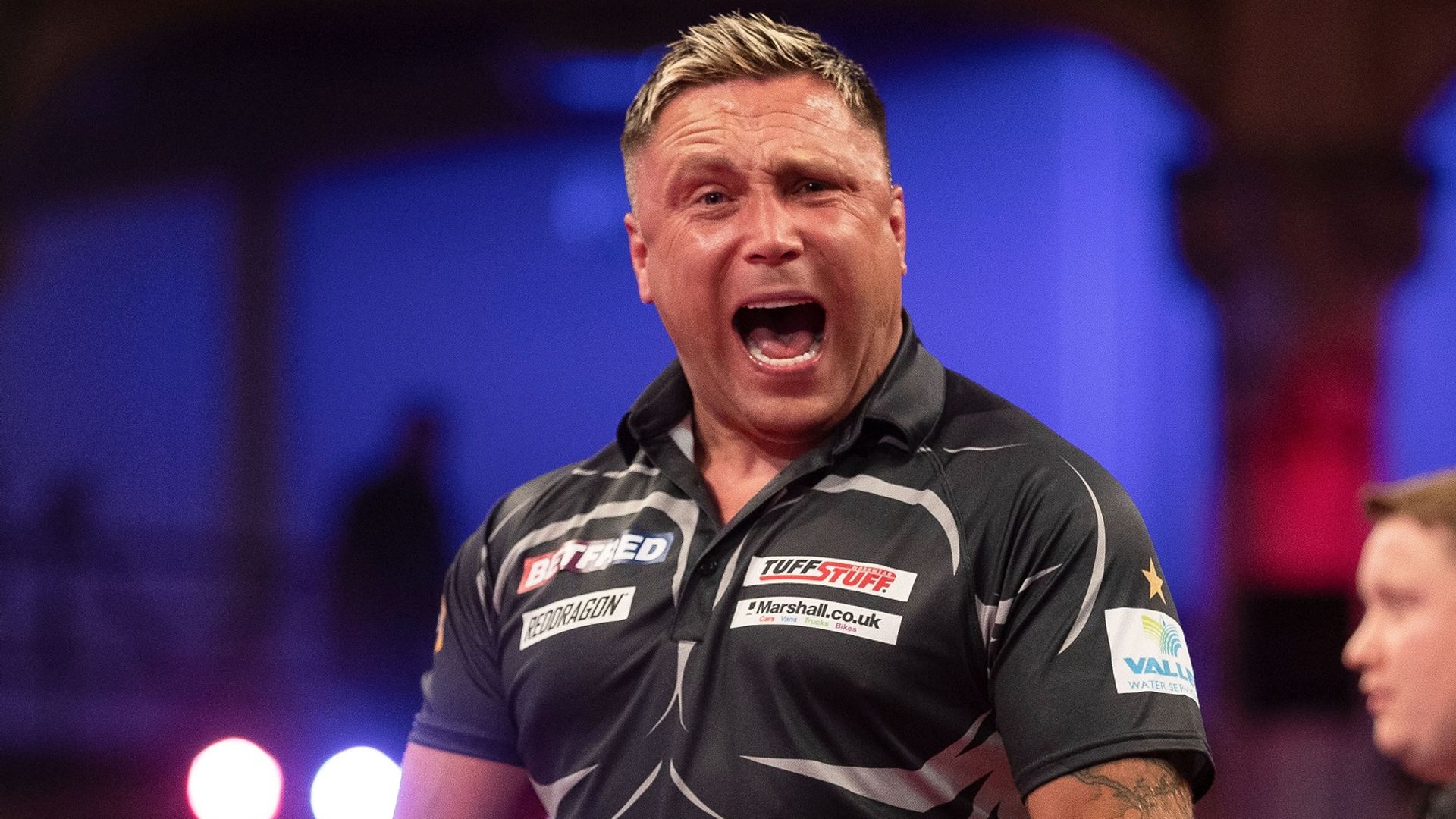 Gerwyn Price sets up tasty second-round encounter against Dave Chisnall while Jose de Sousa will take on comeback king Rob Cross at the World Matchplay following a dramatic night of darts; watch every session at the Winter Gardens in Blackpool – live on Sky Sports 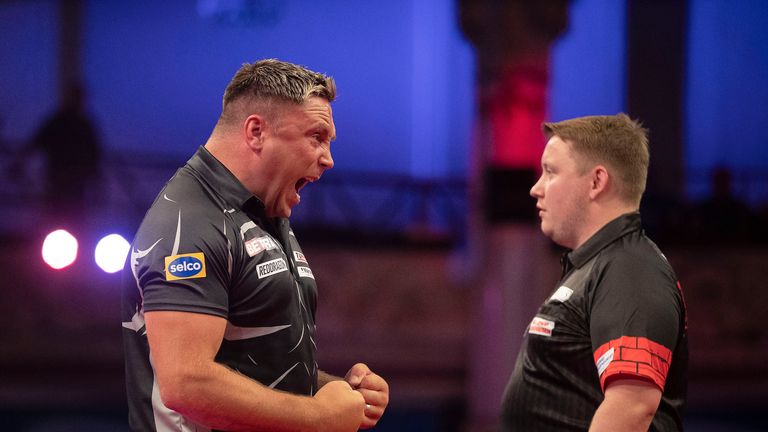 Gerwyn Price began his quest for a first World Matchplay title with a hard-fought win against Martin Schindler. Here’s the best of the action from Monday night in Blackpool…

Gerwyn Price began his quest for a first World Matchplay title with a hard-fought win against Martin Schindler. Here’s the best of the action from Monday night in Blackpool…

Gerwyn Price, Dave Chisnall and Jose de Sousa all made it through at the World Matchplay in Blackpool as Rob Cross staged a stunning comeback from 8-2 down to win a thriller.

Welshman Price began his quest for a first title in the seaside resort with a nervy 10-8 victory over Martin Schindler, while De Sousa wrapped up a 10-6 victory over Gabriel Clemens to reach the last 16 for a second consecutive year.

Cross produced a remarkable comeback, recovering from 8-2 down to defeat Chris Dobey 11-9, and in the final match of the night, five-time quarter-finalist Chisnall inflicted more misery on Kim Huybrechts with a 10-7 victory. 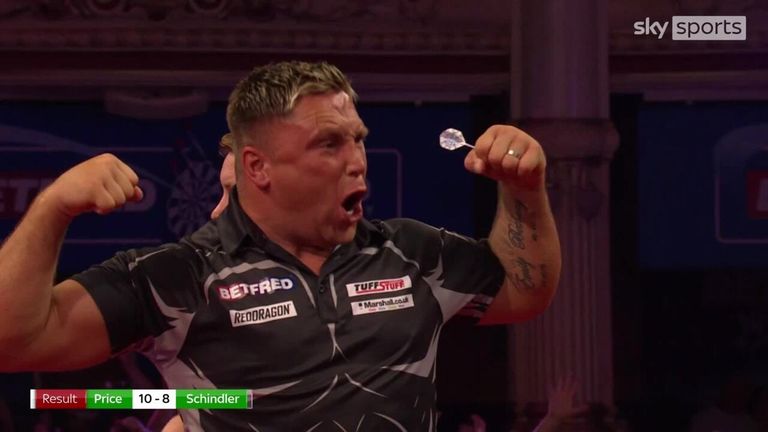 After a slow start from Price and Schindler, ‘The Wall’ landed a 141 checkout to break throw and level at 5-5.

Determined debutant Schindler twice held his throw to lead 6-5 and 7-6, before ‘The Iceman’ struck back-to-back 11-dart legs to lead 9-7.

Schindler kept fighting, taking out 91 to stay alive, but Price shut the door on the German with a 91 checkout of his own to book his place in the last 16. 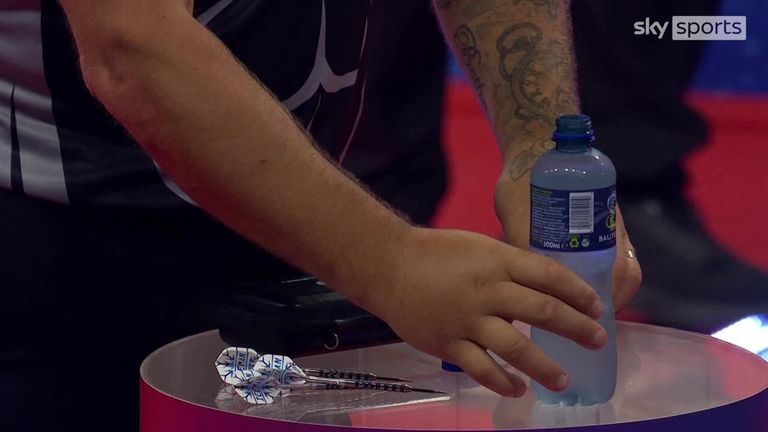 Rafael Nadal in disguise? Price was seen placing his water bottle very specifically on the table at the start of his match

Rafael Nadal in disguise? Price was seen placing his water bottle very specifically on the table at the start of his match

“I think I put myself under a lot of pressure by letting him off early on,” Price reflected

“Sometimes that’s what I need to get myself going and I was playing some good darts by the end of the match.

“I’ve not been playing very well the last couple of months, as everybody knows, but today I came out fighting.

“I want to win this tournament and get back to world number one, back to where I think I deserve to be, but I’ll have to come through a few tough games to do that.” 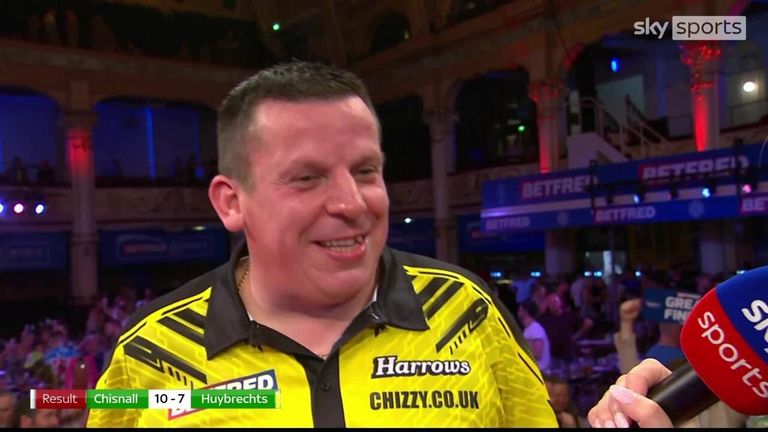 The Welshman will take on Chisnall in the second round after the five-time quarter-finalist showed his battling qualities to beat Huybrechts.

On his first Winter Gardens appearance since 2018, ‘The Hurricane’ impressed and kept in touch with Chisnall in a game riddled with breaks of throw.

With the scores level at 7-7, Chisnall held his nerve, winning the last three legs to deny his Belgian opponent what would have been a second World Matchplay win in eight appearances. 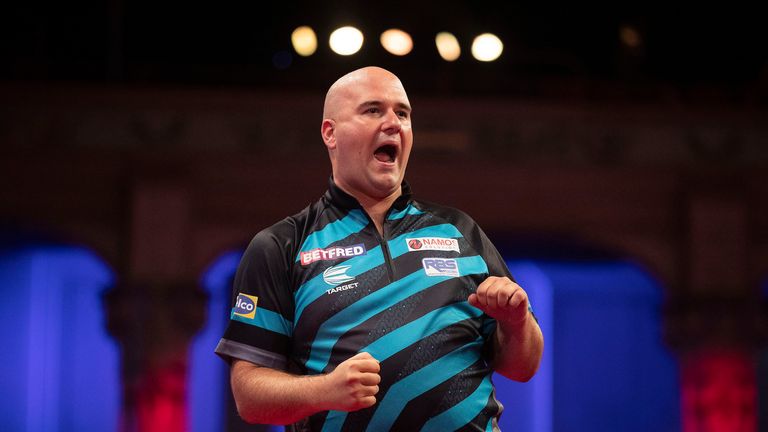 Rob Cross staged a sensational comeback to defeat Chris Dobey in a thriller. Here are the best checkouts from the night…

Rob Cross staged a sensational comeback to defeat Chris Dobey in a thriller. Here are the best checkouts from the night…

Cross, who produced one of the greatest comebacks in World Matchplay history in defeating Daryl Gurney en route to the 2019 title, was staring an early exit in the face as a fired-up Dobey hit two double 19s for a 92 checkout to lead 8-2.

But Dobey was unable to see out a first victory on the Winter Gardens stage, as ‘Voltage’ reeled off six successive legs to level at 8-8.

Dobey stopped the rot with an 11-darter, and with the Geordie waiting on 48 for the match, Cross pinned a skin-saving bullseye with his last dart to take out 74 and level once again.

After Dobey missed a dart at tops, Cross once again found a last dart double, this time double nine, to go 10-9 up before keeping his composure with a 13-darter to seal an unlikely win. 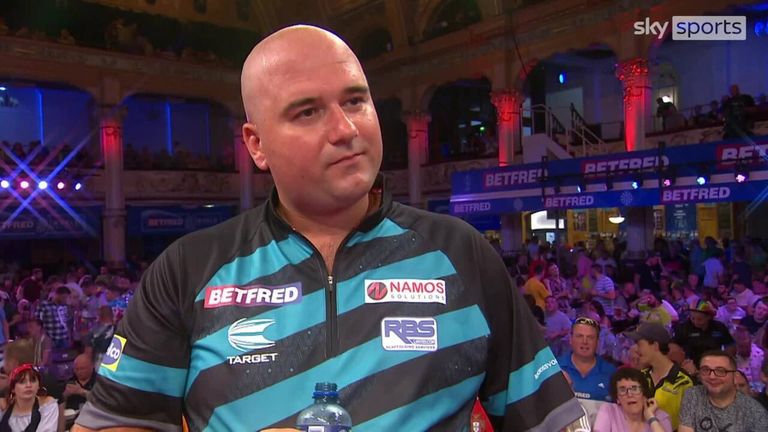 Cross recovered from 8-2 down to win a thriller. Here from ‘Voltage’ who won the title here in 2019. Can he repeat the trick?

Cross recovered from 8-2 down to win a thriller. Here from ‘Voltage’ who won the title here in 2019. Can he repeat the trick?

“In the first 10 legs my darts were slipping, everything was all over the place,” admitted Cross, who will face Jose de Sousa in round two.

“When I was 8-2 down, I stayed on stage during the interval and I knew if I could just produce a steady level, and stop him getting to nine legs, I had a chance.

“Chris missed a lot, he should’ve beaten me, but I’ve produced these comebacks before so I had the belief I could turn it around.

“This place [Winter Gardens] will always be special to me, I love it here so I’m really pleased to stay in the tournament.” De Sousa, the world No 7 was the front-runner throughout the contest with Clemens, but was made to wait for the winning moment after a cruel bounce-out denied him a two double-tops finish on 100 for a 10-5 win.

Undeterred, ‘The Special One’ landed his sixth 180 of the contest in the following leg before sealing the deal with his only ton-plus checkout of the match thanks to a with a show-stopping 136. 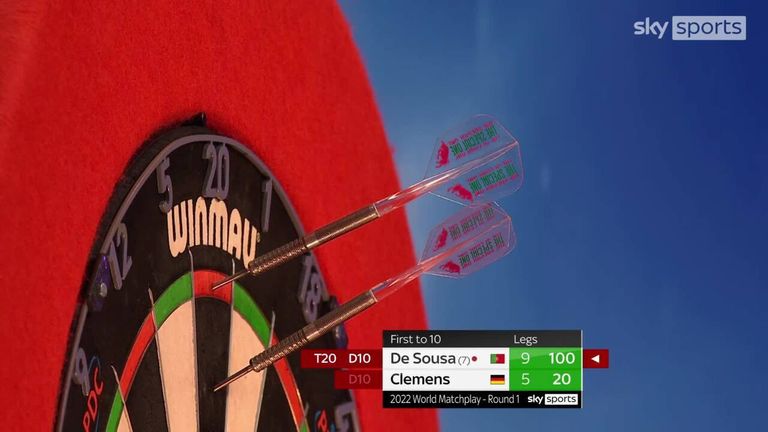 Check out daily Darts news on skysports.com/darts, our app for mobile devices and our Twitter account @skysportsdarts. You can watch the World Matchplay at the Winter Gardens in Blackpool – live on Sky Sports over the next seven days.