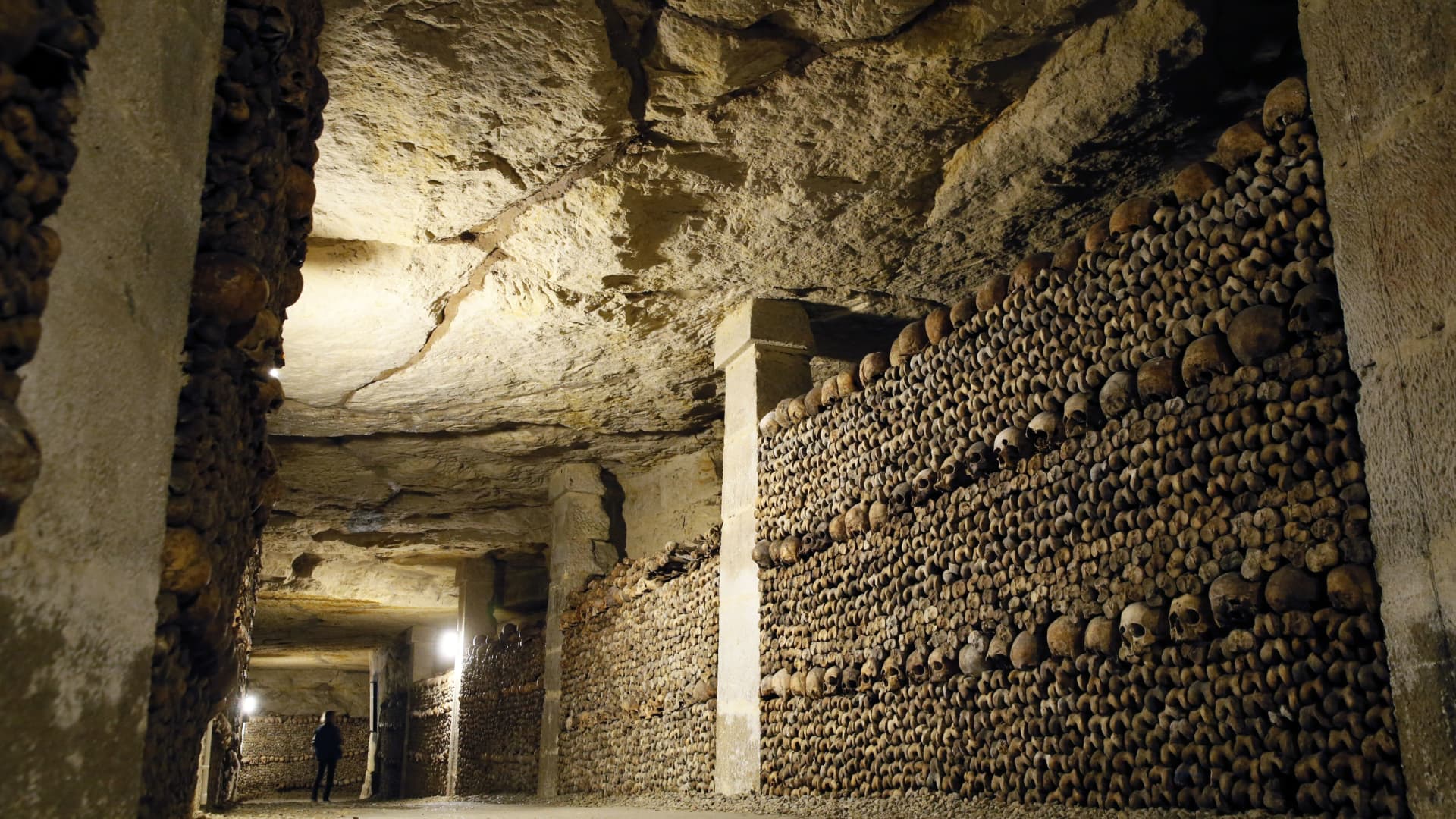 Skulls and bones stacked at the Catacombs of Paris

PARIS — About 65 feet below ground level in Paris is a labyrinth of centuries-old tunnels known as the Catacombs, which hold the skeletal remains of around six million Parisians. Legend has it that plague victims comprised some of the bones lining the hallways.

This week, it turned into a techno cave with neon lights for top ethereum programmers to party till 4 A.M. The mantra was “leave no trace” so everything was gone by sunrise.

“It’s very illegal but also very crypto,” explained one of the roughly 100 party attendees, who declined to be identified for fear of alerting the Paris police.

She also said the trek was one of the most ridiculous things she’s ever done in her life. The expedition included crawling under a fence, wiggling down caves, tracing the path of old train tracks, wading through thigh-deep, muddy water — and a bit of bouldering.

“There was a gap in the rocks, and I didn’t think anything of it. I was just like, ‘Oh, we’re pausing here,’ and then a human popped out,” the attendee explained.

Multiple squads gathered across the 14th arrondissement of Paris late Saturday night to sneak into the underground landmark. Each team was assembled via an anonymous Telegram group and assigned its own entrance.

“You got a link and a password to a survey form, and you basically answered some questions and gave your Telegram. If you were chosen for this adventure, you got added to a Telegram group with a handful of other people you didn’t know, and the guide dropped into the thread on the day-of to tell you a meeting spot,” recounted the attendee.

Another partygoer turned on their fitness tracker to map the distance and found they had traveled four and a half miles underground.

All the paths converged on a large central cave, where there was a DJ, a bar with neon lights, candles, and people dancing.

The only downside to an underground rave hosted in a mass grave?

“People start thinking, ‘Er, where am I gonna get out?'” said another person who attended.

Welcome to the Ethereum Community Conference, an annual event that draws the world’s top developers and cryptographers to the City of Light. The event officially kicked off Tuesday morning, but key players in the space descended on Paris days in advance to take part in ancillary events like the Metaverse Summit and a Parisian-style salon dubbed The Future of Content in Web3. And for the parties like La Degen and Raave.

Photo taken while en route to secret, underground party in the Catacombs of Paris

EthCC is in some ways the opposite of Bitcoin Miami, the highest profile crypto conference.

While Bitcoin Miami boasts attendance in the tens of thousands, EthCC deliberately capped tickets at 2,000 to keep it small and intimate. CNBC spoke to nearly a dozen people on the ground in Paris who weren’t able to buy a ticket before the event sold out, but came to town anyway just to participate in all the side events.

“They kept it tailored and small intentionally, because they could easily have sold more tickets,” said Samantha Yap, who’s helping to coordinate EthCC.

The event comes at a difficult time for the crypto industry. Major names like Three Arrows Capital and lenders like Celsius and Voyager Digital have all filed for bankruptcy, and the knock-on effect has been brutal, shaking overall confidence in the sector — and raising questions about the current state of the decentralized finance (or DeFi) ecosystem.

“I think a lot of projects were completely without substance,” developer Max Saal said of the many companies that cropped up in 2021 amid the boom in token prices. “It’s a deterrent for people who are…actually building something real.”

Meanwhile, ethereum is also on the precipice of a years-in-the-making upgrade that will be its most significant overhaul since the digital currency was launched nearly a decade ago. There’s a lot at stake with this roll-out.

Cryptocurrencies such as ethereum and bitcoin are often criticized for the process of mining to generate new coins. Both currently use a so-called proof-of-work mining model, where miners race to solve complex math equations using banks of powerful computers.

Ethereum has been working to shift from the energy-intensive proof-of-work method for securing the network to a proof-of-stake model, which requires users to leverage their existing cache of ether as a means to verify transactions and mint new tokens. This requires far less power and will translate to faster transactions.

The transition has been repeatedly pushed back for the last several years because of major flaws in the implementations. But a series of dress rehearsals in the last few months have shown promising signs that all will go smoothly when the so-called “merge” happens in September.

If things don’t go well, there is a question of what impact that might have on digital assets more broadly. Take DeFi, which aims to recreate traditional financial systems like banks, but with cryptocurrency. They mostly run on the ethereum blockchain. It is unclear what would happen to large swaths of the DeFi ecosystem should there be any hiccups with the big transition to proof-of-stake later this year.

But the vibe on the ground at EthCC is overwhelmingly positive, with most people excited that a bear market translates to no grifters because there’s no fast, easy profit to be made.

Dani Osorio, who has spent the last several years working in infrastructure and developer relations and organized the EthDenver conference eariler this year, tells CNBC that there are a lot of blockchain and crypto conferences around the world, but EthCC is the only one that’s focused on the technical participants.

“You’ll see CTOs, technical founders, cryptographers, and protocol researchers. That’s unheard of,” said Osorio, who added that she met ethereum founder Vitalik Buterin in a courtyard in Paris back in 2018 at the first EthCC venue.

Felice Schimmel represents TikTok celebrities, and she began to go down the rabbit hole of web3 in Nov. 2021. She came to Paris to better understand the conversations happening among insiders, especially as regulation becomes more of an international conversation.

“[Web3] allows you to have an opportunity to own your fans and your followers. That allows you to connect with them without having a platform in the middle of that conversation.”

Not even a Bohemian prince hailing from a 600-year-old noble family in the Czech Republic was able to grab a ticket in time before they sold out. But William Lobkowicz — who has spent the last year minting his family’s collection of 20,000 cultural objects as NFTs — flew in from Prague anyway to talk shop with some of the brightest minds in the blockchain ecosystem.

“I come from an industry that is struggling and where drastic change is needed for sustainable and long-lasting development,” he told CNBC. “What if conventional no longer works?”

People don’t talk price charts or markets at EthCC, but ether is currently rallying after a stretch of depressing pricing. Ether is the token native to the ethereum blockchain, and it is up almost 40% in the last five days, after a long plunge that took it down nearly 70% from its peak last November.