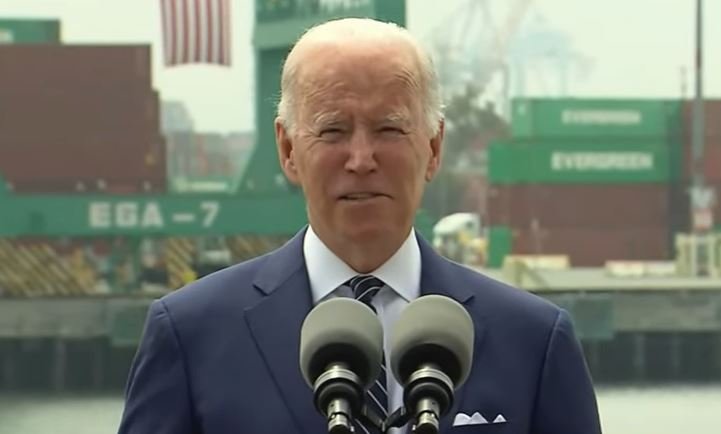 One Year Ago, Biden Predicted Inflation Would Be ‘Temporary’

By Philip Wegmann for RealClearPolitics

A few minutes before midnight Saturday, President Biden walked through the humid summer heat back to the White House, stopping briefly to respond to shouted questions over the din of Marine One’s whirling helicopter blades and still distant thunderstorms. A reporter asked, will inflation go down?

“I’m hoping,” Biden replied. And so is everyone else at the White House.

Outside economists were warning last July that high prices were a sign of coming high inflation. “But that’s not our view,” the president said a year ago today. He had consulted with his economists, and they had reviewed their charts, and Biden waved away the alarm bells.

“Our experts believe, and the data shows,” Biden said, “that most of the price increases we’ve seen were expected and expected to be temporary.”

The numbers the president was reading when he offered that optimistic forecast showed an annualized rate of inflation of 5.4%. The latest numbers, figures from June of 2022, show an inflation rate of 9.1% – the fastest pace in four decades and the defining challenge of an increasingly beleaguered presidency.

From the president to his press secretary, the White House insisted that long-term inflation was unlikely. And the word they started using last summer to describe the phenomenon they hoped would be temporary was “transitory.” Inflation has instead stayed high for 13 back-to-back months. In that time, the administration blamed a number of causes from the lingering pandemic to a land war in Europe.

Jen Psaki, the former White House press secretary, told reporters last November that coronavirus, and the challenges brought with it, were “the root cause of inflation.” The next month, when inflation climbed to 6.8%, Biden predicted that the country had finally reached “the peak of the crisis.” When Russian tanks started rolling across Ukraine in March of 2022, the president described rising food and gas prices as “Putin’s price hike.”

Whatever the cause, or more than likely the multiple causes, the administration stopped calling inflation temporary. Since last spring, the president has said that tackling rising costs would be his “top priority.”

And Jared Bernstein saw some good news on that front. The president’s economic adviser brought a chart of gas prices to the briefing room on Monday and told reporters that he expects the price-per-gallon will drop below $4 in some parts of the country. The national average had dropped 50 cents over the past month thanks in large part to historic releases from the Strategic Petroleum Reserve, and Bernstein reported that for the average American driver, that would amount to a savings of “about $25 per month” when compared to the June peak.

RELATED: Report: 1 in 5 Americans Are Skipping Meals As Long Lines At Food Banks Make a Comeback Under Biden

Those savings haven’t yet changed the attitudes of American consumers. A new CNBC survey found that 75% of middle-class households, those making between $30,000 and $100,000, believe their earnings are falling behind the cost of living. Another 77% in that income bracket expect the country will be in a recession by the end of the year. And they aren’t alone. Jamie Dimon, the CEO of JPMorgan Chase and an ally of this administration, has been warning since last month that investors “better brace” for an economic catastrophe.

Not Bernstein though. Back in the briefing room, the president’s economist pointed to low unemployment numbers and strong consumer spending as “anything but recessionary.” And as far at the old transitory talking point was concerned, he said that was an error in language.

To conservatives like Rep. Jim Banks of Indiana, the real problem was that “Democrats are too disconnected from working Americans to treat inflation as an urgent political issue.” The chairman of the Republican Study Committee, the largest conservative caucus on Capitol Hill, told RealClearPolitics that the issue transcended the midterms or even the next presidential election. “Inflation,” Banks predicted, “is going stain their entire party for decades.”

The most stinging criticism doesn’t come from the right, though. Larry Summers warned for months that trillions in COVID relief spending risked overheating the economy and driving up inflation, but the White House didn’t listen to former President Obama’s longtime economic advisor. They aren’t listening now either as Summers, the economist who got inflation right, is warning a recession is on the horizon.

The administration is not without introspection, however. Treasury Secretary Janet Yellen admitted in May that she had underestimated and downplayed the possibility of increased inflation. One of the most prominent voices insisting inflation would be temporary, Yellen later said on CNN that she was “wrong then about the path inflation would take.” Of course, some things were yet unknown when she offered that view, namely how war would disrupt global markets, and the Treasury secretary said there were subsequent “unanticipated and large shocks to the economy.”

What was expected, at least among Republicans, was that massive spending, trillions in COVID stimulus and then in an infrastructure package, would increase the money supply to an unsustainable amount. “In June 2021, Biden said, ‘if it turns out that what I’ve done so far – what we’ve done so far – is a mistake, it’s going to show,’” Sen. Marsha Blackburn said, rewinding the tape and reading from the president’s past remarks. “Americans are seeing firsthand,” the Tennessee Republican told RCP, “just how big of a mistake Joe Biden’s presidency has been for our country.”

RELATED: Survey: Nearly 50% of Economists Believe A Recession Is Coming

During those same remarks last June, the president also predicted that inflation numbers would “pop up a little bit and then go back down.” Given that the administration had misjudged the threat of inflation previously, how confident should the public be in their future economic assessments?

“Let me ask you to focus on what we’re trying to talk about today, which is something that is happening in the here and now,” Bernstein told RCP, pointing to the chart of dropping gas prices behind him.

“We’re talking about what has happened in the past 34 days to prices at the pump. They’ve fallen 50 cents, and you heard me go through some of the numbers in terms of the relief for American drivers. At the same time, we are not stopping there. Okay? This is nothing close to a victory lap because we have much more to do to achieve the president’s agenda,” he added, before calling on Congress to pass new spending measures to decrease the cost of prescription drugs and boost investment in domestic production of microprocessors.

According to the president’s economist, those reforms are part of the long game though. “To be clear, that’s not a near-term intervention that’s going to show up in the next couple of months,” Bernstein told RCP, “but longer term absolutely.”

Certainly, the temporal cadence of those potential reforms, implied or otherwise, is yet to be determined; and meanwhile, Biden, along with everyone else in his administration, hopes inflation will come down already.