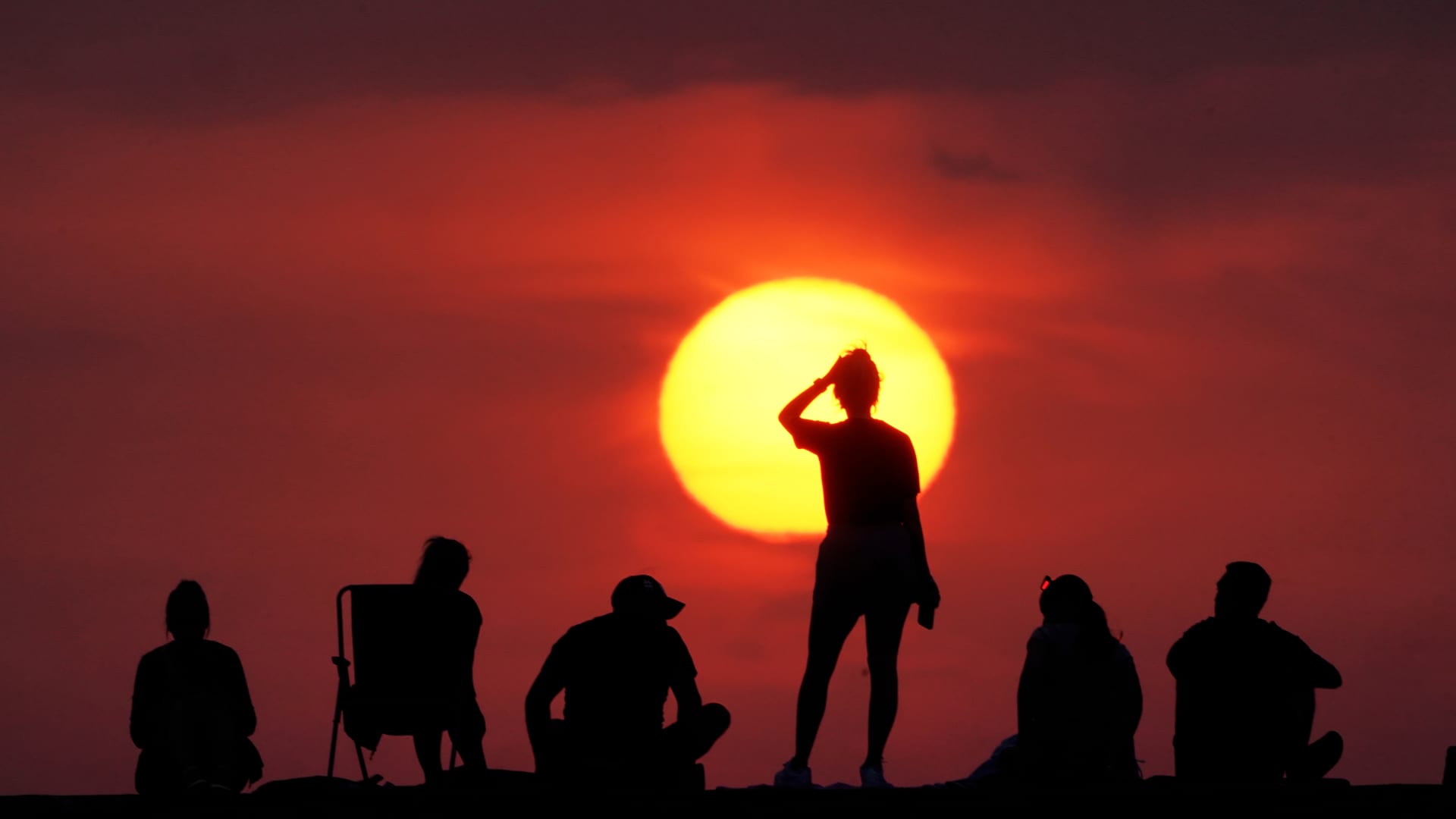 UK shatters record for its hottest day ever with temperatures hitting 104.4 Fahrenheit

People turn out to watch the sunrise at Cullercoats Bay, North Tyneside. Britons are set to melt on the hottest UK day on record as temperatures are predicted to hit 40C. Picture date: Tuesday July 19, 2022.

LONDON — Britain recorded its hottest-ever day Tuesday, with temperatures hitting a high of 40.2 degrees Celsius (104.4 degrees Fahrenheit) in south England, according to provisional data from the Met Office.

The figures from the U.K.’s weather service showed Heathrow, near London, hit the new high Tuesday, surpassing the record of 39.1C set earlier in the day in Charlwood, Surrey. A previous high of 38.7C was recorded in 2019.

It comes as Brits face the second day of an extreme heatwave, which is causing widespread disruption and raising the risk of wildfires.

“If confirmed this will be the highest temperature ever recorded in the UK. Temperatures are likely to rise further through today,” the Met Office said on Twitter.

Temperatures are forecast to hit as high as 42C in parts of England by Tuesday afternoon, according to the Met Office, which issued a red extreme heat warning. Health authorities urged people to take precautions, including staying indoors and drinking plenty of water.

The country is also on high alert for wildfires, with the southeast of England at “very extreme danger,” according to the European Forest Fire Information System.

It comes as many parts of Europe and North Africa are also currently experiencing extreme temperatures, with wildfires breaking out in France, Spain, Portugal, Greece and Morocco.

Millions of Brits endured the country’s hottest-ever night Monday, with temperatures remaining above 25C in places, surpassing the previous nightly record of 23.9C recorded in Brighton in 1990.

It followed a day of extreme heat Monday, during which a high of 38.1C was reached in Suffolk in the east of England — falling just short of the U.K. record.

The high temperatures have been particularly disruptive for a country with little infrastructure or conveniences like air conditioning to cope with hot weather.

The U.K.’s Met Office has said extreme temperatures in the country have been made 10 times more likely by climate change.

Emergency services were on high alert across the country as they faced a surge in weather-related incidents, with several fatalities already reported.

A number of schools closed early Monday, or didn’t open at all, despite government advice to remain open.

Meanwhile, water companies in the south of England reported an “extraordinary” surge in demand due to the weather, which they said could result in low pressure or even interrupted supply.

Infrastructure struggles under the heat

The soaring temperatures also led to travel chaos for commuters and holidaymakers as hundreds of services were halted.

Runways at both London’s Luton Airport and RAF Brize Norton in Oxfordshire were impacted by the heat, causing aircraft to be diverted and flights canceled.

Meanwhile, rail services were heavily affected, with buckled rails reported and overhead wire systems failing. In some areas, cancellations and speed limits of 20 miles per hour were imposed.

Britain’s Transport secretary, Grant Shapps, told the BBC that the country’s rail network could not handle the intense heat, adding that upgrades to help services cope with extreme temperatures would take “many years.”

“Closed 19th Due to the Heatwave” is written on a notice hanging on a closed store. In the London region, the temperature could rise up to 40 degrees.

“We are building new specifications, creating overhead lines that can withstand higher temperatures. But with the best will in the world, this is infrastructure which has taken decades to build, with some of our railways stretching back 200 years,” he told the BBC on Tuesday.

It comes as heatwaves grow more common and severe because of human-induced climate change. Indeed, the U.K.’s Met Office has said extreme temperatures in the country have been made 10 times more likely by climate change.

Average world temperatures have risen by just over 1C from their pre-industrial levels, and are set to climb by 2.4C to 4C by the end of the century, depending on global efforts to cut CO2 emissions.

Greg Dewerpe, founder and chief investment officer at venture capital firm A/O PropTech, told CNBC on Tuesday that as much as $10 trillion per year needs to be invested in buildings and infrastructure between now and 2050 to help countries deal better with the new climate realities.

“If you look at the built world overall, there is about $10 trillion a year that needs to be invested in retrofitting technologies for housing, for offices, for all sorts of buildings around us, by 2050,” he said.

“Technologies that are going to enable us to transition in terms of decarbonization and resiliency are key,” Dewerpe added.