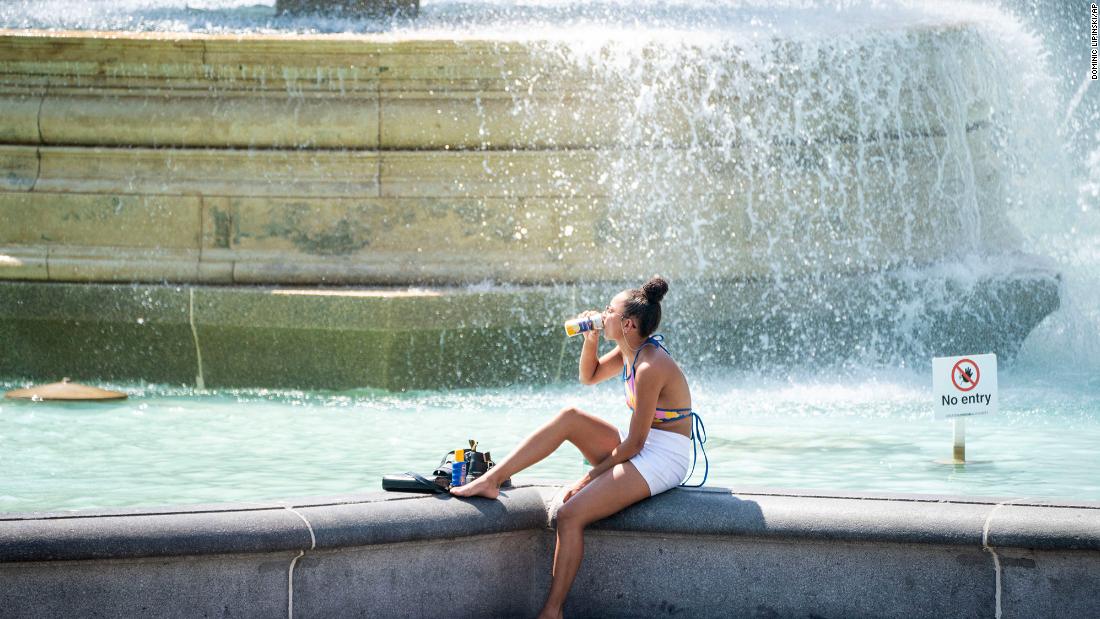 Americans are used to switching on their air conditioners any time temperatures near 80 degrees Fahrenheit (27 degrees Celsius). But in the UK, record-shredding heat this week has brought life to a pandemic-esque standstill.

Temperatures in the UK breached 40 degrees Celsius (104 Fahrenheit) for the first time on Tuesday, making it the country’s hottest day on record.

In the US, one-third of the population was under heat-related weather warnings on Tuesday and Wednesday, with temperatures expected to climb north of 110 degrees Fahrenheit (43 degrees Celsius) in the Plains states.

Looking at the cause of these heat extremes in the US and Europe, there are different systems at play.

In Europe, a strong ridge of high pressure has allowed temperatures to build over the continent for the past several days. On Tuesday, an area of low pressure was moving in off the coast, acting to help funnel the extreme heat northward into the UK.

In the US, a strong dome of high pressure has set up over the Southern Plains and Mississippi Valley. Instead of heat being funneled in from the south, it is building unabated as the sun bakes down through cloudless skies.

The connecting tissue between these heat waves is the influence of greenhouse gas emissions and the planet’s ever-warming baseline temperature.

The UK Met Office’s chief scientist, Stephen Belcher, was in a state of disbelief as he delivered a video statement about the shocking temperatures the country experienced Tuesday, noting they would have been “virtually impossible” the UK in an “undisrupted climate.”

“But climate change driven by greenhouse gases have made these temperatures possible, and we’re actually seeing that possibility now,” he said, adding that if the world keeps emitting greenhouse gases at the level it is now, such heat waves are likely to occur there every three years.

Forty degrees Celsius mat not be that hot to someone sitting in the Central US, Australia, the Middle East or in northern India. In the UK, it forced people to work from home and students to study remotely. Authorities told people not to take trains, which become dangerous on hot tracks that expand and bend in the heat.

In other words, don’t leave home.

But in the UK, which is more likely to struggle with cold rather than hot, homes too are designed to keep heat in. Desk fans are selling out all over the country, but they only go so far.

The weather has got Brits so hot and bothered, poor heat management has become the latest criticism hurled at the nation’s outgoing prime minister Boris Johnson — this week held up as another example of the disgraced leader’s failures.

“The all-time temperature record for the UK has not just been broken, it has been absolutely obliterated,” said Hannah Cloke, natural hazards researcher at the University of Reading. “The mark of 39 degrees Celsius will never even exist as a UK temperature record, because we have just soared past it into the 40s in a single sweaty leap.”

The UK is woefully unprepared for the impacts of the climate crisis. It struggles to manage floods when they occur. In the heat, the nation buckles.

So many fires ignited in London on Tuesday that the city’s fire brigade declare a “major incident” and were stretched beyond their capacity. Four people have drowned as people flocked to beaches, rivers and lakes just to try to get cool. Even a runway at an airport on London’s outskirts had to be closed off as it melted in the heat.

In southern Europe, a region more accustomed to extreme heat, at least 1,100 people have died in the latest heat wave, and French firefighters are overwhelmed with blazes tearing through forests. Twenty-one European nations are under heat-related warnings.

Americans may be more used to the heat, but heat waves are getting longer and more frequent there too, which means more time indoors, or wherever the air conditioning may be. No fewer than 100 million Americans — almost a third of the nation — were under heat alerts on Tuesday.

The alerts run from the southern Plains into the Mississippi and Tennessee River Valleys, and there are scattered alerts through the Southwest. The Northeast has already issued heat advisories for heat “feeling like” 100 degrees Fahrenheit (37.8 Celsius) for Wednesday.

The most dangerous heat is forecast around parts of Texas, Oklahoma and Arkansas where excessive heat warnings are in place for Dallas, Oklahoma City, Tulsa and Little Rock. Temperatures there are expected to soar to 100 to 110 degrees Farhenheit (as high as 43 degrees Celsius) over the next few days.

Scientists who work on just how much of a role the climate crisis is playing in extreme weather now say that just about every heat wave in the world is influenced by humans burning fossil fuels.

Friederike Otto from the Grantham Institute for Climate Change at Imperial College London said that it was up to the world to reach net zero — where humans emit as little greenhouse gas as possible and “offsets” the rest — to stop heat waves from becoming even worse, “deadly and disruptive.”

“We have the agency to make us less vulnerable and redesign our cities, homes, schools and hospitals and educate us on how to keep safe,” Otto told CNN. “40 degrees Celsius in the UK is not an act of god, but to a large degree due to our past and present burning of fossil fuels.”

In China, the annual “sanfu” — which is usually three lots of 10 days in July and August when temperatures and humidity peak — is now forecast to run for an “extended period” of 40 days, the state weather forecaster said, according to Reuters.

It warned of scorching heat waves this week, despite seasonal rain, with temperatures likely climb as high as 42 degrees Celsius (107.6 Fahrenheit) in the south from Wednesday.

In central London on Tuesday, a student named Asser who braved the heat told CNN that world wasn’t doing enough to battle the heat waves.

“You’ve got heat waves in Europe and London and US, everywhere — you can see it, it’s obvious. You’ve got floods and wildfires and everything.”