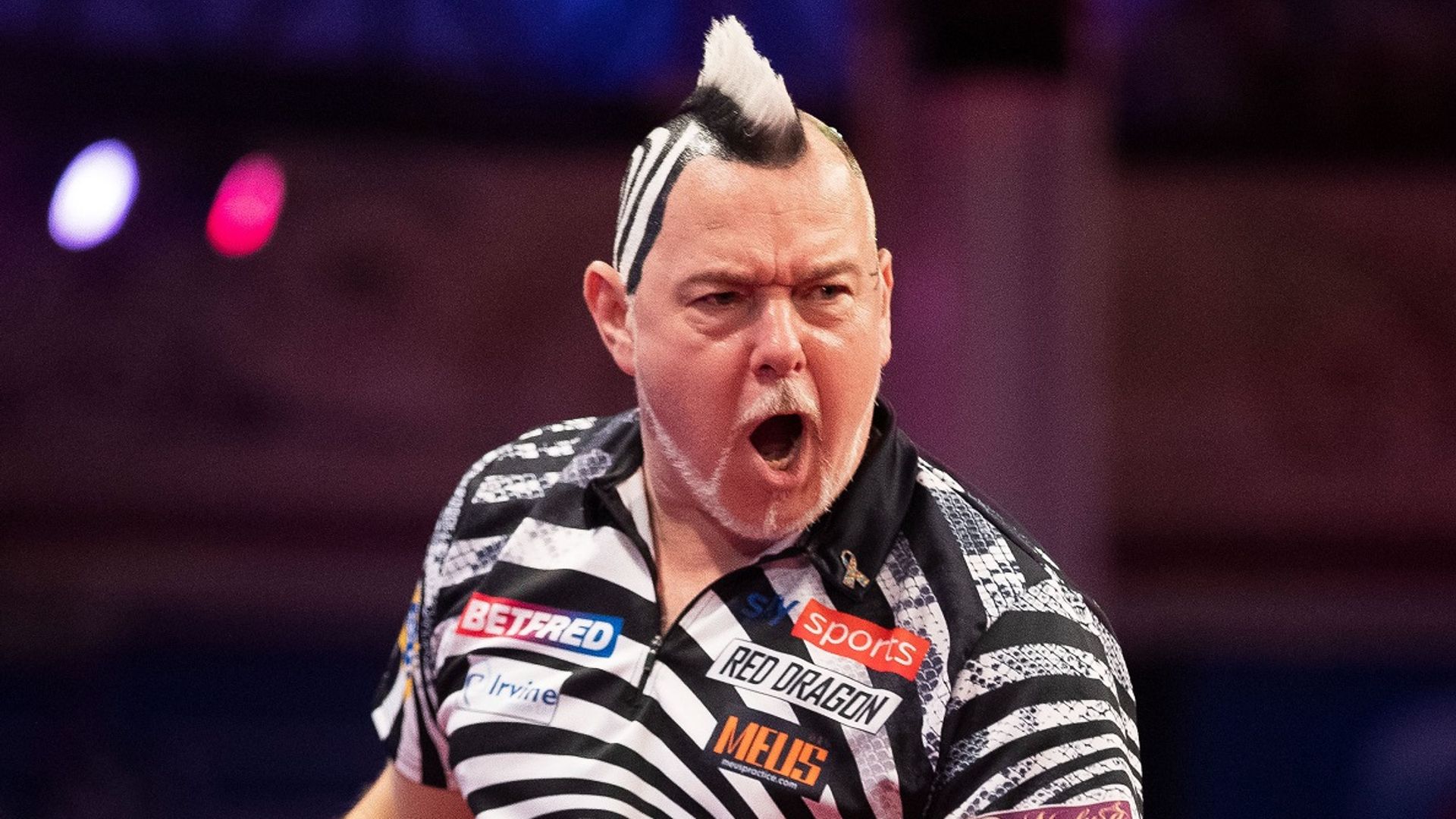 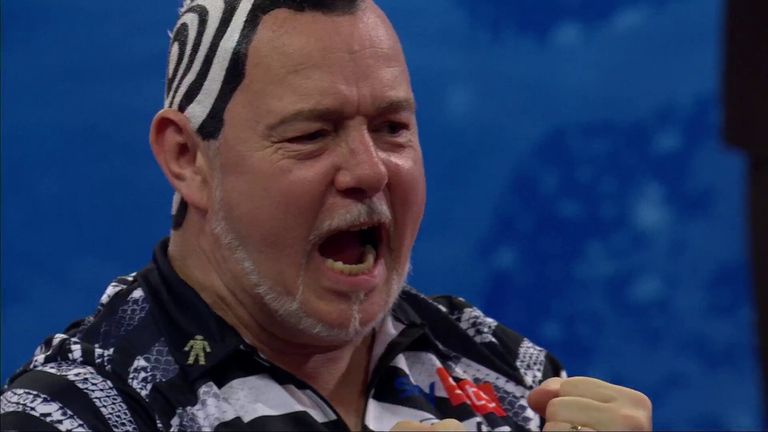 Peter Wright edged out Krzysztof Ratajski in a thrilling tie-break at the World Matchplay on Tuesday night. Here are the best checkouts from a sensational night of arrows…

Peter Wright edged out Krzysztof Ratajski in a thrilling tie-break at the World Matchplay on Tuesday night. Here are the best checkouts from a sensational night of arrows…

Peter Wright edged out Krzysztof Ratajski in a thrilling tie-break to keep the defence of his World Matchplay title on course by reaching the quarter-finals in Blackpool.

On a blistering night in Blackpool, Wright denied Krzysztof Ratajski in the game of the tournament so far before two-time World Matchplay winner Van Gerwen defeated Joe Cullen in a repeat of last month’s Premier League final.

James Wade’s hopes of landing his first World Matchplay title since 2007, however, are over after he was edged out 11-9 by Nathan Aspinall, while Dimitri Van Den Bergh, the 2020 champion, ended the run of Austrian debutant Rowby-John Rodriguez with an 11-6 win. 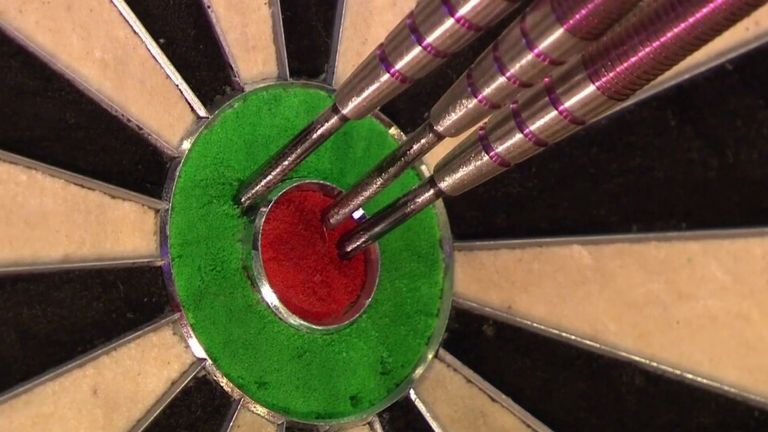 Wright nailed this magnificent 125 (bull, 25, bull) during his epic victory

Wright nailed this magnificent 125 (bull, 25, bull) during his epic victory

Wright, wearing a hypnotic swirl themed shirt and matching head paint, looked poised to breeze through to the last eight after storming into a 7-3 lead, converting 127 and 125 checkouts and firing in a brace of 11-darters.

Ratajski rallied, reeling off four consecutive legs to draw level at seven apiece, before defying a magnificent 10-darter from ‘Snakebite’ by landing back-to-back 180s en route to a 12-dart riposte.

Nevertheless, ‘The Polish Eagle’ was staring down the barrel after squandering three darts to break throw and lead 10-9, with Wright leaving 16 after nine darts in the following leg. 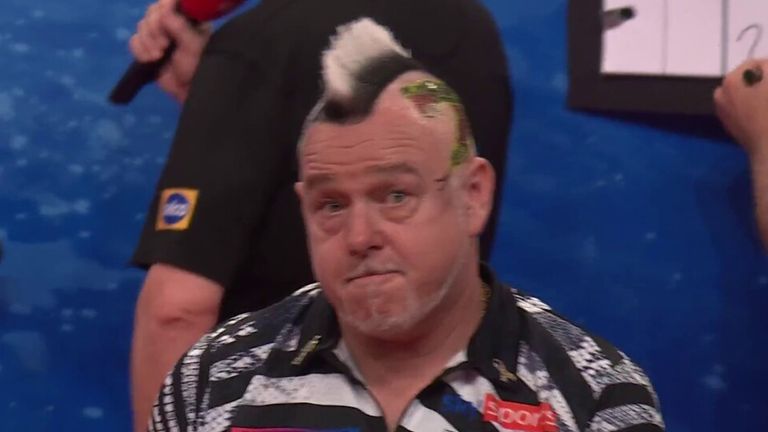 Wright also took out this 127 on the bullseye

Wright also took out this 127 on the bullseye

However, the World Champion and world No 1 returned the favour by frittering away three match darts, and Ratajski capitalised, sinking a two-dart 77 combination to send the contest into overtime.

The pair traded holds as the drama continued, although it was the Scot who kept his cool, following up his third 11-darter of the evening by pinning double 10 to triumph with his fifth match dart.

“I really enjoyed it,” said Wright, who averaged 103.5 and landed ten 180s to set up a last eight showdown against Dimitri Van den Bergh, in a repeat of last year’s final.

“You need to be in matches like that sometimes to see where you are. That has definitely got me ready for Dimitri now.

“Dimitri is playing really well. He has won two World Series titles recently, he’s taken his game to the next level, so it should be another tight game. Bring it on!” 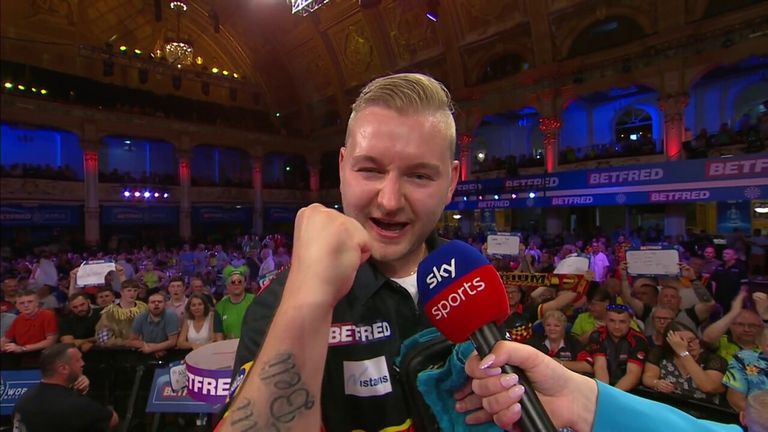 Van den Bergh recovered from a sluggish start to complete an 11-6 victory over debutant Rowby-John Rodriguez in Tuesday evening’s opener.

Rodriguez had pulled off a shock result to knock out Welsh No 8 seed Jonny Clayton in the opening round, but came up short against his friend Van Den Bergh.

The 2020 champion, bidding to reach a third consecutive World Matchplay final, averaged 98.62, hitting six maximums, and landed a stunning 146 checkout to seal his victory and a place in the last eight. 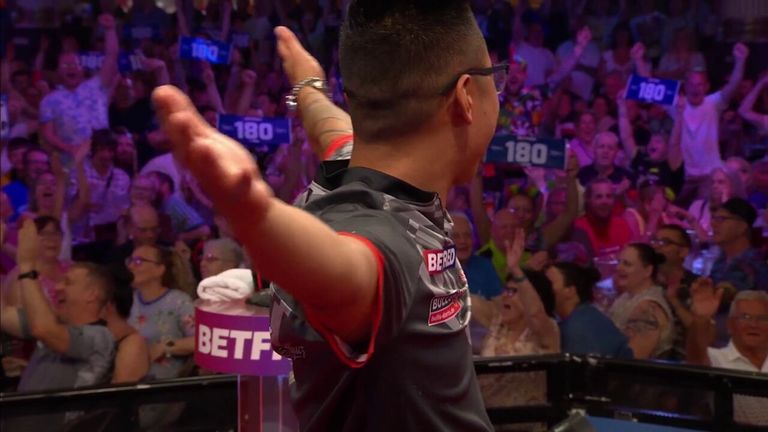 “I have dreams that I am chasing. I’m loving it,” said Van den Bergh, who converted 11 of his 18 attempts at double.

“Rowby is one of my best friends. He is a class player and he’s finally showing what he can do.

“You cannot give these players chances. I want to improve because at the moment I don’t feel like I’m playing fantastically, but I’m so working so hard.” 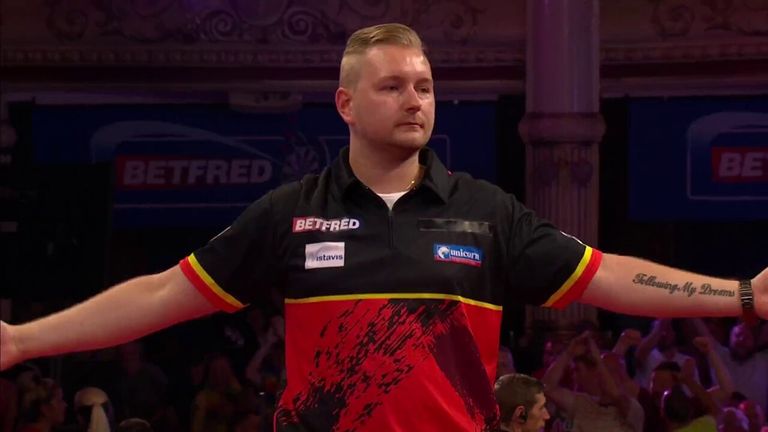 Van Gerwen’s hopes of a first World Matchplay title since 2016 are still alive, after he eased past a profligate Cullen to seal his spot in an eighth quarter-final at the event.

The Dutchman was below-par in his opening round win over Adrian Lewis, yet he showed no signs of fragility in the early exchanges against Cullen in a repeat of the Premier League final, racing into a 4-1 lead with an imperious 111 average. 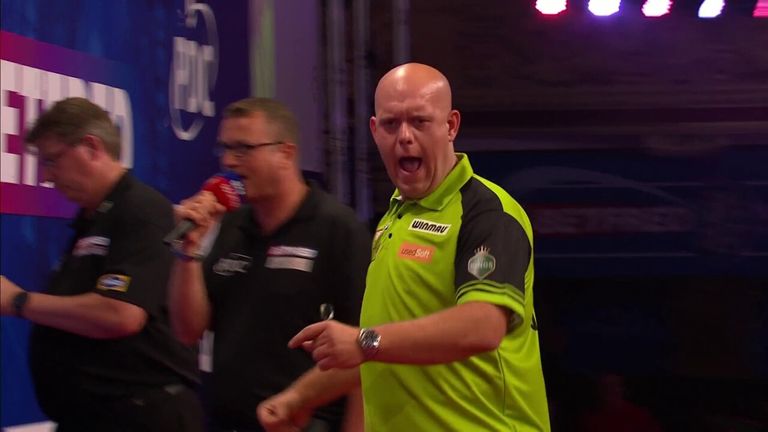 The pair traded four consecutive 180s in a remarkable fifth leg, and the high-scoring continued in leg six, as Cullen cut the deficit with a 12-dart break to double his tally.

However, the Masters champion never recovered from squandering four darts at double to level proceedings, with Van Gerwen winning seven of the final nine legs to complete a comprehensive 11-5 success. 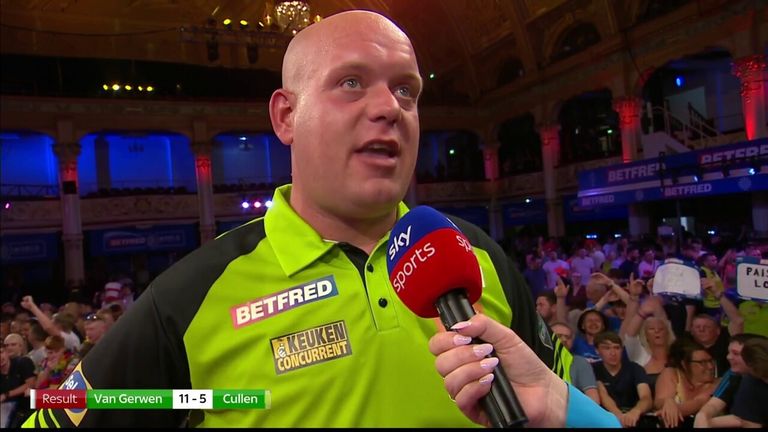 “I was on a mission. I started off really well and that gave me a lot of confidence,” said the three-time World Champion.

“I’m still not 100 per cent, everybody knows that, but even when I’m at 90 per cent, I can beat everybody in this tournament.

“This is one of the most important tournaments of the year. You want to perform here, and I’m so glad to be in the quarter-finals.”

Van Gerwen will take on Aspinall in the last eight, after the former UK Open champion produced an impressive late flurry to edge out 2007 champion James Wade 11-9 in a high-quality contest.

Wade, fifth on the PDC Order of Merit, had started brightly, opening up a 2-0 lead with an early break before Aspinall, twice a World Championship semi-finalist, took the next four.

There remained little between the pair, with ‘The Machine’ Wade gaining some momentum at 7-5 before a 13-darter from Aspinall tied the match again.

A third maximum and 82 checkout saw Aspinall moving to within one leg of victory at 10-8 before finishing the job on his next throw. 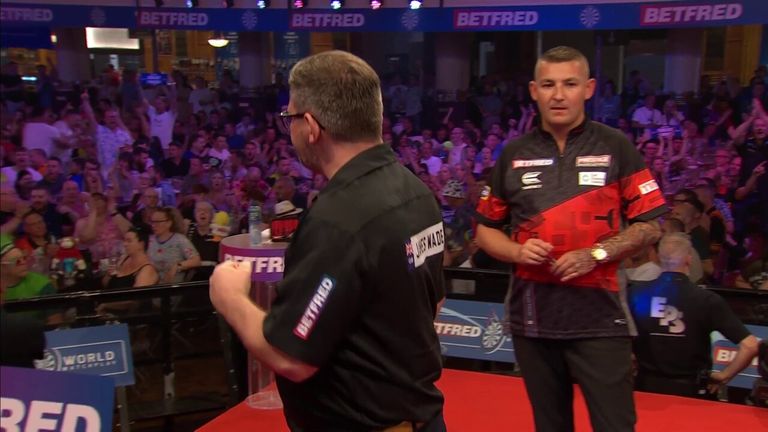 “Every game I play is always a battle. James is a fantastic player. I knew it was going to be a tough game,” reflected Aspinall, who was beaten by Van Gerwen at the same stage of last year’s tournament.

“I really enjoyed it. I struggled in the middle part of the game, but I think my will to win got me through that in the end.

“I’m still learning all the time and I’ve learned a lot about my myself this week. I want to win it. I want this to be the year of the Asp.”

The second round draws to a close on Wednesday evening, as world No 2 Gerwyn Price continues his title bid against five-time quarter-finalist Dave Chisnall.

Check out daily Darts news on skysports.com/darts, our app for mobile devices and our Twitter account @skysportsdarts. You can watch the World Matchplay at the Winter Gardens in Blackpool all the way through to Sunday’s climax – live on Sky Sports.