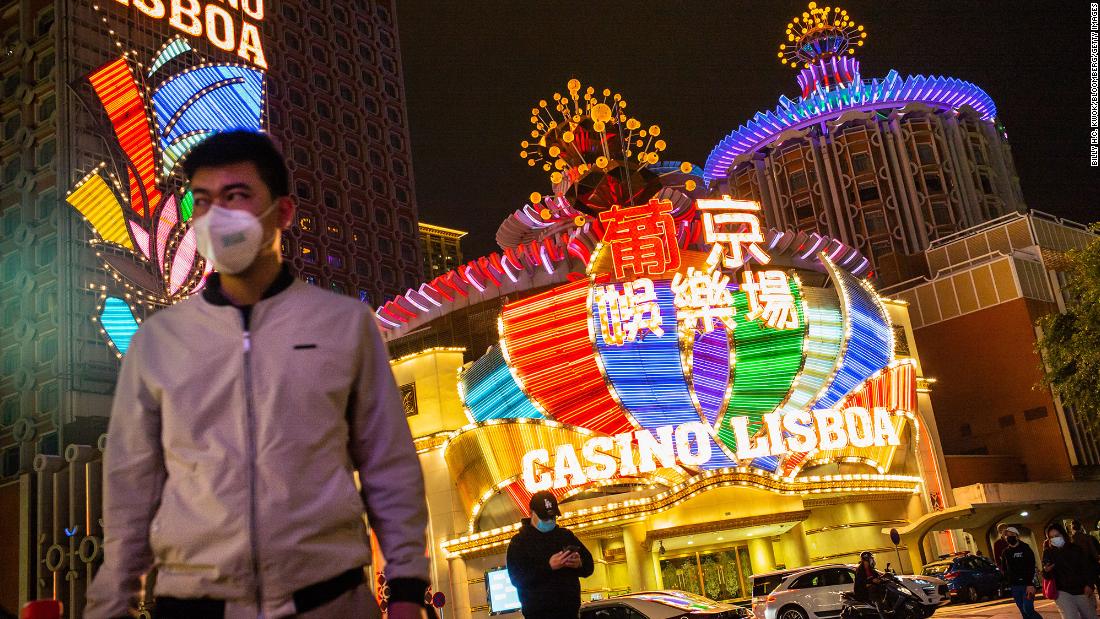 Macao’s casinos have been bleeding hundreds of millions of dollars a month during the pandemic. Now a prolonged lockdown is adding more uncertainty for players in the world’s largest gambling hub.

Since last week, Macao has been under strict stay-home orders as it grapples with a surge in coronavirus cases. Macao, a former Portuguese colony that is now governed by China, is subject to Beijing’s “zero Covid” policy, which aims to eliminate all traces of the virus within its borders.

Macao’s latest restrictions were meant to last one week, but were later extended another week – ending Friday.

In a rare move, authorities said that casinos would be part of the shutdown, marking a reversal from previous measures that had kept those properties open. This means that gross gaming revenue, an important gauge of casinos’ income, will likely “plummet close to zero” for weeks, Vitaly Umansky, a senior analyst at Bernstein, wrote in a report.

His team predicts that gross gaming revenue will slump 98% this month compared to July 2019 -— before the pandemic hit — assuming that casinos resume operation next week.

Gaming is by far Macao’s most important industry, accounting for massive employment and more than 80% of government revenue. But casinos such as the Wynn, MGM and Sands have been pummeled by the effects of the pandemic, which have left the city’s borders largely closed for more than two years.

Major casino stocks trading in Hong Kong — such as Sands China (SCHYF), Wynn Macau (WYNMF) and MGM China (MCHVF) — have dropped approximately 60% or more since the start of 2020.

Even before the latest restrictions, companies were hemorrhaging cash. In 2020, at the beginning of the global health crisis, the Wynn disclosed it was losing up to $2.6 million a day.

This spring, the broader gaming industry in Macao would have burnt an estimated $113 million to $260 million a month, according to an analysis by Goldman Sachs.

“It is very quiet on the ground here,” said Ben Lee, managing partner of IGamiX, a Macao-based gaming consultancy, adding that local small businesses had been virtually dealt “the death knell” by the new lockdown.

Macao, a tiny territory of some 600,000 people, is the only place in China where gambling is legal.

The city, which is one hour by ferry from Hong Kong, is heavily reliant on tourists and typically rakes in six times the gambling revenue of Las Vegas. In 2019, it attracted nearly 40 million visitors, including many from mainland China.

There have been calls to change that model. In January, the International Monetary Fund warned of Macao’s “overreliance on the gaming sector,” which it said had been brought into focus during the pandemic.

“The key growth driver in the past two decades … almost came to a stop as tourist flows dried up,” it noted, suggesting an urgent “need to diversify the economy.”

The sector is so crucial that it sometimes even seemed immune to “zero Covid” rules. In previous lockdowns, authorities notably refrained from closing the glitzy properties, even if it meant workers would have to sit in empty casinos “swatting flies,” said Lee.

The last time casinos were ordered to close was for two weeks in early 2020.

“The Macao government has been very, very loathe to shut down the casinos, even when all other commercial activities have been instructed to close,” he added. “Why? Because the staff could still draw salaries.”

Now, officials face more pressure to fall in line with China’s hard stance on the virus, particularly as Macao battles its largest Covid outbreak since the start of the pandemic. The city has reported approximately 2,000 new cases since June, when the latest outbreak ended an eight-month streak of zero infections.

Another factor weighing on businesses lately is that officials have made it clear to casinos that they should not lay off workers, according to Lee.

While the unofficial edict has helped protect people’s livelihoods, it has exacerbated the financial strain on companies. Labor typically accounts for 20% to 25% of operating costs, Lee noted.

That, of course, is compounded by the recent plunge in traffic. In a report, analysts at Daiwa said that the liquidity of Macao’s casino operators had to be assessed, “amid [a] zero revenue environment.”

The crisis is causing headaches for executives overseas.

Recently, both the Sands and Wynn have turned to their owners to help them weather the storm, with loans secured from each of their US parent companies, according to Bernstein analysts.

But the new restrictions also come at a particularly tricky time, as casino operators are soon expected to bid for a new license to continue operating in Macao, said Lee.

The process requires significant proof of liquidity — essentially hundreds of millions of dollars in cash, he added.

So while businesses are already strapped, “the parent companies for these highly leveraged subsidiaries have to inject cash into the Macao subsidiaries, [and] they have to carry the burden over in the States, or wherever they are,” Lee said.

Despite the turmoil, Lee doesn’t expect any operators to miss their chance to throw their hats in the ring for new licenses. Companies have already incurred heavy “sunk costs” in Macao, he said, pointing to some that had recently renovated properties or made other big investments just before the pandemic.

“They cannot afford to withdraw, because if they withdraw, they’ve got nothing.”

— Shawn Deng in Toronto, and Lauren Lau and Akanksha Sharma in Hong Kong contributed to this report.