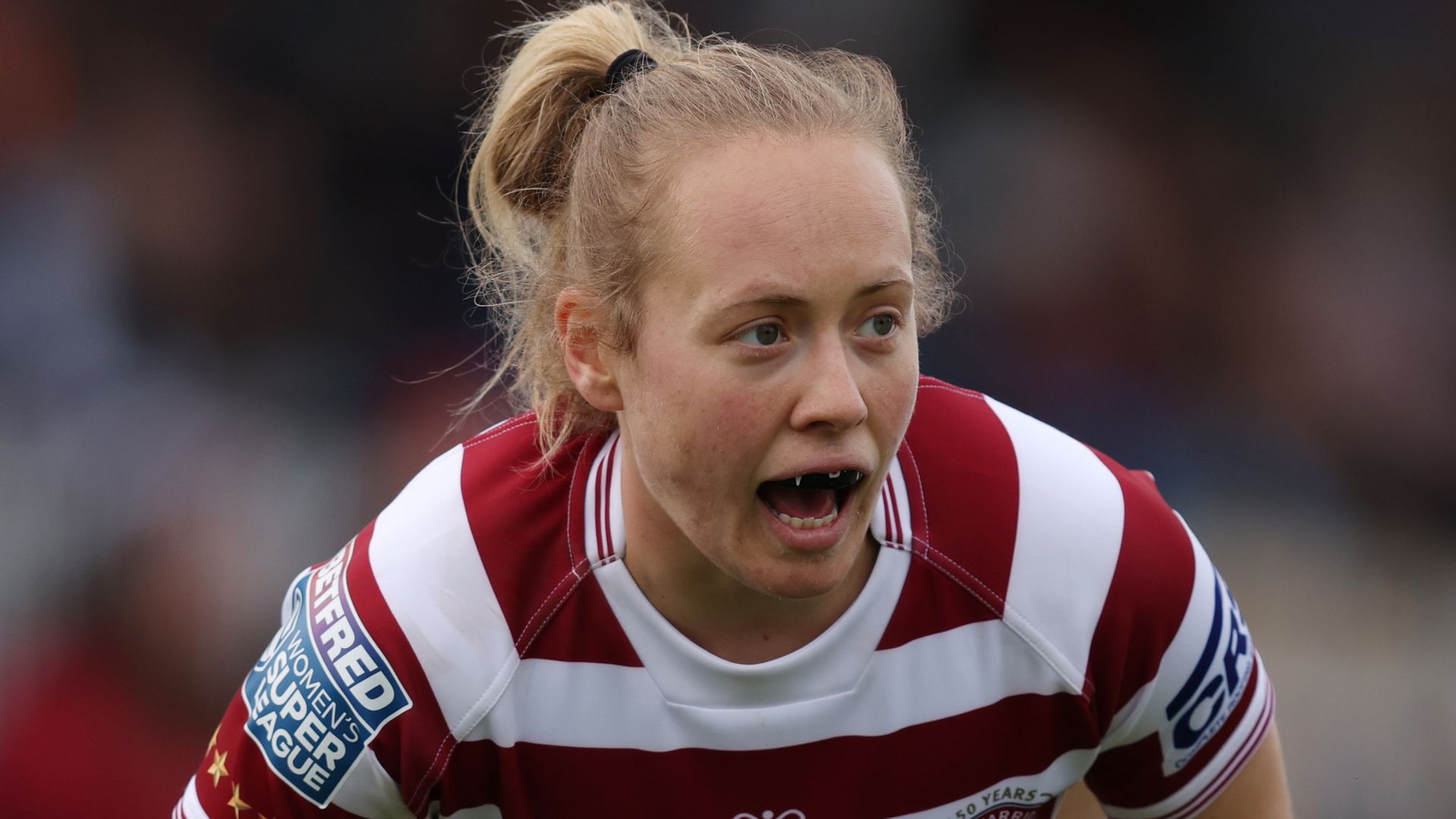 Wigan’s Anna Davies is delighted to see first-hand how more and more girls are getting the opportunity to play rugby league; watch the Warriors face Leeds Rhinos in the Betfred Women’s Super League live on Sky Sports from 5pm on Thursday (5.30pm kick-off)

As part of her job, Anna Davies is helping create opportunities for girls to play rugby which she did not have growing up.

Working for Wigan Warriors’ Community Foundation by day and starring for the Cherry and Whites in the Betfred Women’s Super League by night, the 27-year-old is seeing more and more girls getting excited about playing the sport in the town and surrounding area.

It was not until Davies attended university in Bath that the Nottingham-born former sprint hurdler discovered rugby through her friends, yet she is seeing first-hand just how much the women’s game is being embraced in the schools in one of the 13-a-side code’s hotbeds.

“I refereed a Year 10 girls schools match and for me, that’s amazing because where I grew up we didn’t really play rugby at school and these girls we really going for it, which was fantastic,” Davies told Sky Sports.

“Some of the girls were then mascots for our next game, so then I was walking out holding hands with one of the girls I was refereeing the day before. That is really exciting and now the older girls with the academy can see that pathway and there is more and more excitement that maybe being a rugby player could be a career.

“We’re not there yet, but some of the girls are speaking about it and they can see that, and we’ve got the links with the schools.

“Then among the younger girls, there is just an excitement they can play rugby and there are clubs to send them to. It’s just nice seeing them excited about sport and having a chance to have a go.”

It is not inconceivable that some of these girls could soon be playing alongside Davies as her team-mates either, although one person she will have out on the pitch with her soon is her new housemate.

French international Laureane Biville is living with Davies after making the move to Wigan for the second half of the Women’s Super League season to help with her preparations for the Rugby League World Cup in November.

Named player of the match in France’s 36-10 defeat to England last month, the 23-year-old centre or second row adds another dimension to an already cosmopolitan Warriors squad which includes USA international Taylor White, and former rugby union players like Davies and Freya Hellin.

They go hand-in-hand with those steeped in league such as England international Vicky Molyneaux, whose father Jim also played for Wigan’s men’s team from 1968 to 1972, plus Beth Hayes and Sophie Clarke – granddaughters of RFL match official Keith Leyland and iconic Wigan player and coach Colin Clarke respectively.

Davies, who has moved to centre in recent games after playing on the wing up to this year, is already learning from Biville and her experiences of playing on the international stage and Australia’s NRLW for Gold Coast Titans, but knows her house guest is just as eager to embrace her new surroundings.

“Laureane was saying she wants to encourage French players and show it’s something you can do as a woman to move countries and develop as a player, and have that different experience as well,” Davies said.

“She’s a trailblazer in that and, for myself, there are not many people who have moved in the country to play rugby. But I think that’s the excitement league is attracting and if we can do that, it will maybe help show other people it’s an opportunity and adds to the culture in the club.

“Coming here as an outsider, it’s about adapting to fit into the culture of the club, but also you bring with you your own culture which you can share with others.

“I’m sure with us, Laureane will be such a benefit with us having an insight into how she plays, but also she’s very studious to learn what Wigan’s culture is like and it very much rewards hard work.”

As well as spreading the word that rugby league is open to women and girls in her job, Davies and her Warriors team-mates will be showcasing the Women’s Super League to the wider world on Thursday evening when they face Leeds Rhinos at Headingley, live on Sky Sports.

The match forms part of a double-header with the two clubs’ men’s teams and will see Wigan aim to rebound from the 48-10 defeat to the Rhinos – a match in which Davies was among the try-scorers – in their last outing on July 3.

The regular televising and online streaming of Women’s Super League games is another sign of how the competition is progressing in the build-up to the World Cup, but the next step to help it kick on would undoubtedly be professionalisation in some form. Highlights of the Women’s Super League match between St Helens and Leeds Rhinos shown on Sky Sports in June.

Highlights of the Women’s Super League match between St Helens and Leeds Rhinos shown on Sky Sports in June.

At present, it remains an amateur competition, yet Davies believes it will not be long before that changes.

“The thing at the moment which is driving performance is each other,” Davies, who is inspired to better herself by seeing the levels the likes of St Helens and England star Amy Hardcastle are reaching, said. “We’re spurring each other on, but we’re going to need help from outside to keep increasing those levels.

“At the moment, everybody is balancing training and working, and maybe even childcare, to the point where we all have a limited capacity.

“We can all push our levels, but we can only push them so far before people starting breaking. If you’re doing that level of training, you have to have the rest.

“It might not happen in our generation, but I think we’ll see it and the things we’re doing today are hopefully paving that way for the girls.”

Watch Leeds take on Wigan in the Women’s Super League as part of Thursday’s double-header at Headingley live on Sky Sports Arena from 5pm (5.30pm kick-off).