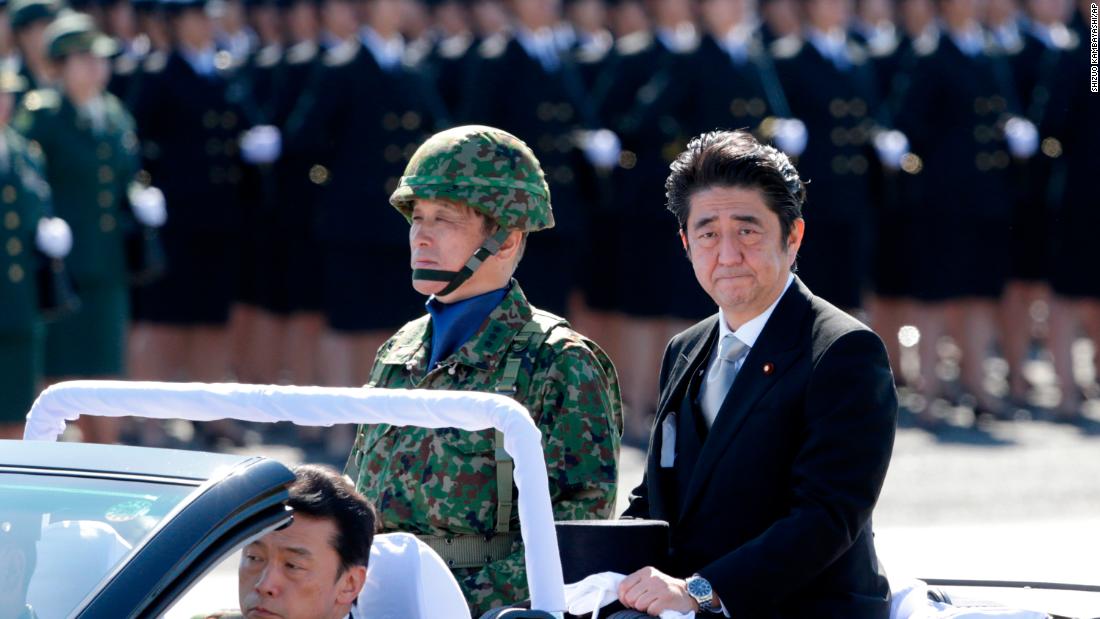 ‘A free and open Indo-Pacific’: With a single phrase, Shinzo Abe changed America’s view of Asia and China

To many in Asia-Pacific, Shinzo Abe was prescient in recognizing the challenge a rising China posed to the American-led system of political and military alliances.

And the former Japanese Prime Minister – killed by an assassin’s bullet on July 8 – arguably did more than any of his Western contemporaries to meet that challenge.

Abe, who served two separate terms and was Japan’s longest-serving prime minister, will be remembered by many as the leader who finally led the country out of the shadows of World War II.

He foresaw that the rapid growth of China’s People’s Liberation Army – fueled by one of the world’s fastest growing economies – would upset the regional balance of power, and argued Japan would, as a result of this shift, have to rethink its post-war, US-imposed pacifist constitution.

In 2014, Abe’s government reinterpreted that constitution to enable the Japanese military to theoretically fight overseas. And he gave it the tools to do so, buying stealth fighters and building Japan’s first aircraft carriers since World War II to accommodate them.

But perhaps his biggest contribution to the defense of his country – and to many, the security of the wider Asia region – lies not in military equipment, but in language; in his coining of the simple phrase: “a free and open Indo-Pacific.”

With those few words, Abe transformed the way many foreign policy leaders talk – and think – about Asia.

Today, much to the annoyance of China’s leaders, that phrase is everywhere. It is used like a mantra by the US military and is the vocabulary of choice for any aspiring Western diplomat.

So it can be hard to remember that, before Abe, few people in these circles talked of the “Indo-Pacific” at all.

Before 2007, the preference in Washington was to conceptualize Asia as that great stretch of the globe spanning from Australia to China to the United States – and to refer to it as the “Asia-Pacific.”

This concept had China at its center – anathema for Abe who, like many Japanese, feared Beijing’s growing clout meant his country could be bullied by a far larger neighbor.

Abe’s aim was to encourage the world to view Asia through a far wider lens – that of the “Indo-Pacific,” a concept spanning both the Indian and Pacific oceans that he first promoted in a 2007 speech to the Indian Parliament titled the “Confluence of the Two Seas.”

This rethinking of Asia’s boundaries did two things. Firstly, it shifted the geographical center to Southeast Asia and the South China Sea – conveniently focusing minds on an area of the world where Beijing has territorial disputes with a string of nations.

Secondly, and perhaps more importantly, it brought into the picture the one country in the world that could act as a counterweight to China through its sheer size alone: India.

Abe recognized “India’s importance as a democratic balancer to future Chinese hegemony” and “began systematically wooing Indian leaders to the framing,” wrote John Hemmings, of the East-West Center in Washington, in a 2020 evaluation of Abe that coincided with the end of his second stint as Prime Minister.

“Including a democratic India in the future of Asia was not only good geopolitics, it was good geo-economics, as India’s population and democratic system balanced out China’s equally large population and authoritarian system.”

Abe became a driving force behind the Quadrilateral Security Dialogue, or Quad, which brought India into a partnership with Japan, the US and Australia that launched the same year as his “Confluence of the Two Seas” speech.

The partnership has its roots in relief efforts for the 2004 Indian Ocean tsunami, but it gained an “ideological component” in a 2006 campaign speech by Abe, according to the Center for Strategic and International Studies. It was then reborn in 2007 as a strategic forum featuring semi-regular summits, information exchanges and –crucially – joint military drills that have met pushback from China.

Months later Abe outlined his vision of a “broader Asia … an immense network” spanning countries that share “fundamental values” such as freedom and democracy, and common strategic interests.

That description appeared to leave little room for China, which has felt threatened by the Quad ever since, and whose Foreign Minister Wang Yi has openly accused the US of trying to encircle China with an “Indo-Pacific NATO.”

When for a while it appeared China’s hostility might scupper the Quad, which fell apart in 2008 following threats of economic retaliation by Beijing, Abe played his hand once again.

According to Japan’s Ministry of Foreign Affairs, Abe first outlined his vision for a “free and open Indo-Pacific” at a keynote speech in Kenya in 2016.

His vision consisted of three pillars: the promotion and establishment of the rule of law, freedom of navigation and free trade; the pursuit of economic prosperity; and a commitment to peace and stability.

The term acted “as a foil for Beijing’s increasingly China-centric vision of Asia’s future, while promoting openness and values to attract regional hedgers,” said Hemmings, of the East-West Center.

The year after Abe’s Kenya speech, the Quad was reborn – and the Trump administration unveiled its own concept of a “free and open Indo-Pacific.”

By the time of Abe’s death the Quad had expanded significantly. In the past two years the four countries have held two joint naval exercises, convened around the mantra of promoting a “free and open Indo-Pacific.”

Writing after Abe’s death, Robert Ward, Japan chair of the International Institute for Strategic Studies, noted how Abe had restructured his country’s foreign policy, “driven by his quick recognition of the threat to Japan and the regional order from China’s rapid rise.”

As such, Ward wrote, it was “hard to overstate the transformational importance of his legacy, both inside and outside Japan.”

The breadth of Abe’s influence is clear from the tributes that followed his death.

Among the statesmen paying their respects was Indian Prime Minister Narendra Modi – who has referred to Abe as a “dear friend” since meeting him in 2007, and declared last Saturday a day of national mourning in India for the former Japanese leader.

Telling, too, were the tributes from the US – China’s biggest rival and Japan’s biggest military ally.

Under Abe, ties between the US and Japan had reached a “new level,” said Tobias Harris, senior fellow for Asia at the Center for American Progress, and this was reflected in President Joe Biden’s order that US flags be flown at half-staff at all public buildings in the country and all federal facilities around the world.

It was also reflected in the White House’s official tribute. Abe was “a faithful friend to the United States,” the White House said. “He worked with American Presidents of both parties to deepen the alliance between our nations and advance a common vision for a free and open Indo-Pacific.”

There’s that line again, “a free and open Indo-Pacific.”

The phrase has become ubiquitous in US policy and military statements, while in 2018 the Pentagon’s Pacific Command headquarters in Hawaii changed its name to Indo-Pacific Command to recognize “the increasing connectivity between the Indian and Pacific oceans as America focuses West.”

In a speech titled “A Free and Open Indo-Pacific” in Indonesia last December, US Secretary of State Antony Blinken said Washington would “work with our allies and partners to defend the rules-based order that we’ve built together over decades to ensure the region remains open and accessible.”

Japanese Prime Minister Kishida used the term 19 times as he explained Japan’s promotion of “a free and open Indo-Pacific” vision that had “come to gain broad support in the international community.”

That “broad support” may be Abe’s most enduring legacy. A tribute, in its own way, to the vision Abe had hinted at eight years earlier in his own speech to the Shangri La Dialogue.

Telling his audience Tokyo was ready to take the lead in making the region prosperous for all, Abe had called on all countries to observe international law so that future generations could “share in this bounty.”

“If you imagine how vast the Pacific and Indian Oceans are, our potential is exactly like the oceans,” Abe said. “Limitless, isn’t it?”