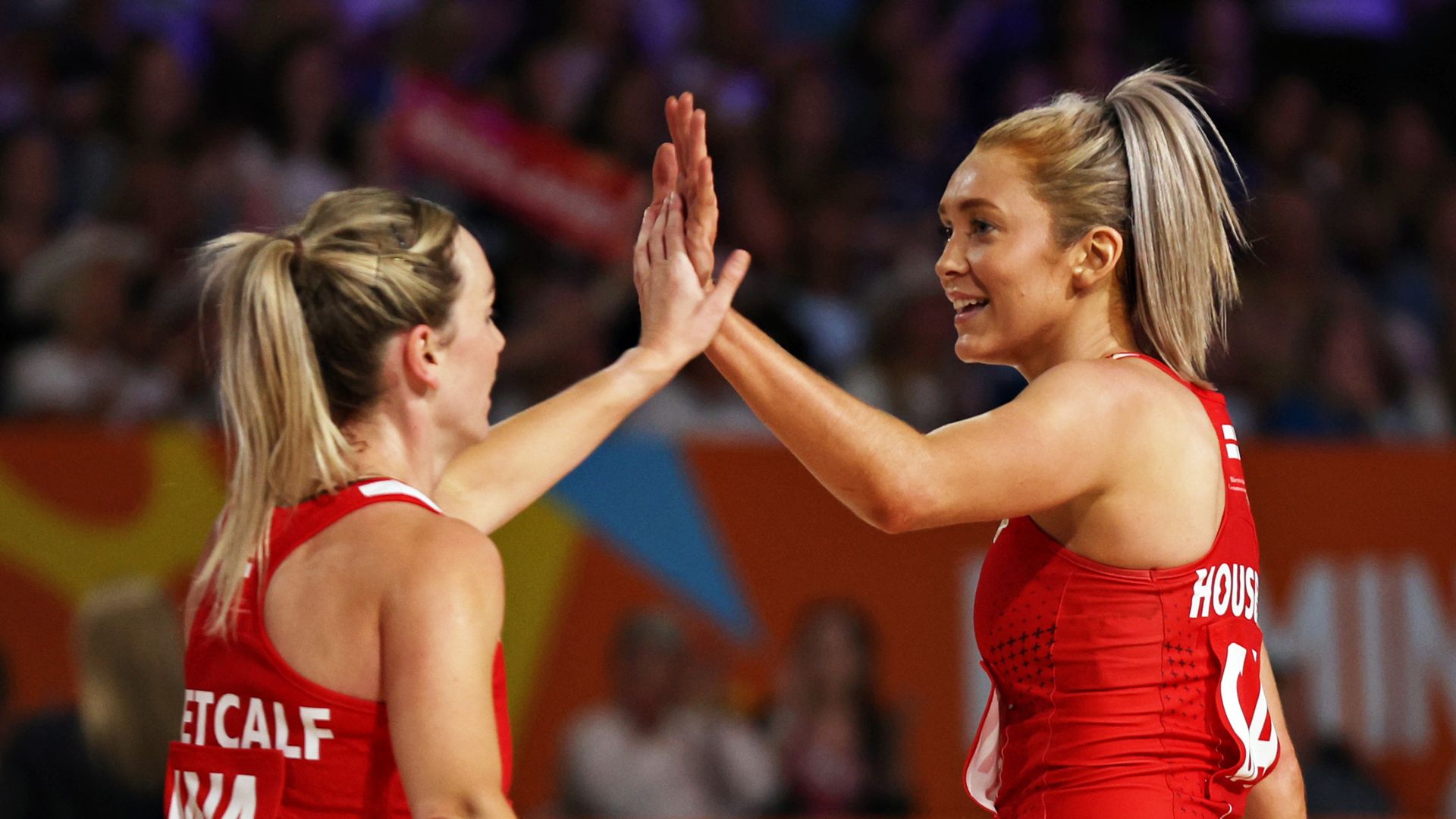 England beat New Zealand by 10 goals and remain unbeaten as they bid to defend the title they won four years ago on the Gold Coast; the home team’s next match will be a semi-final encounter with Australia on Saturday; New Zealand and Jamaica will face-off in the other semi-final

England produced a stunning performance to beat New Zealand 54-44, top Pool B and book a semi-final meeting with Australia at the Commonwealth Games.

Jess Thirlby’s team rattled New Zealand from the outset at the NEC Arena and forced their opponents into constant personnel changes throughout the 60 minutes.

After a commanding start, England were reeled back in and held a narrow 25-24 half-time lead. However, they controlled the second half exceptionally well and thrived off the support of the home crowd.

England will now take on Australia in the semi-finals on Saturday, after Jamaica stunned the Diamonds earlier on Thursday. The Sunshine Girls’ 57-55 win ensured they topped Pool A and Australia had to settle for second place.

Jamaica and New Zealand will face-off against each other in the other semi-final on Saturday. The gold medal match takes place on Sunday at the NEC Arena.

England took the first centre pass and immediately converted it to goal with captain Nat Metcalf swiftly finding Eleanor Cardwell under the post.

Cardwell had been selected to start alongside Helen Housby in England’s shooting end, while in the other shooting circle, 20-year-old Grace Nweke was New Zealand’s target.

From the outset, the experienced Geva Mentor and Layla Guscoth disrupted Nweke’s rhythm and shots, plus that of goal attack Maia Wilson. England pressed 5-2 and then 10-5 ahead, after clinically converting rebounds and tips through to goal.

With five minutes of the first quarter remaining, New Zealand had put up just 50 per cent of their shots at goal, an unheard-of number at international level, while England were up at 85 per cent.

The Silver Ferns used the final part of the quarter to settle somewhat and up their accuracy, which brought about in a 15-8 scoreline in England’s favour at the first pause.

Taurua made changes to New Zealand’s line-up for the second quarter.

Kate Heffernan was brought on at wing defence to try and diminish the work of Metcalf, who had commanded the goal third imperiously during the first 15 minutes.

Te Paea Selby-Rickit replaced Wilson at goal attack, while England remained unchanged as they aimed to deliver more of the same.

England’s first shot missed, New Zealand then delivered a two-goal run to tighten things up and grew in confidence from there.

Selby-Rickit opened space up for them in attack and in defence, with Heffernan in New Zealand’s zone, it started to become much more of a challenge for England to get through.

New Zealand took command for 10 minutes, moving 12-6 up in the quarter and taking it 16-10 to make it a single-goal contest at half-time.

The third quarter is often known as the ‘championship quarter’ due to its pivotal nature and Thirlby was the one to make personnel changes for it.

Jo Harten arrived at shooter to link up with Housby, while New Zealand stuck with the line-up that had turned the match around for them in the second quarter.

England made the first move; turning ball, converting handling errors to goal and raising their intensity from post-to-post.

Metcalf became as effective as she was in the first quarter. Harten, who has been grappling with a knee issue throughout this tournament, fed Housby superbly.

Housby continued to show how much of a big-game player she is, and on account of her 190th cap, Jade Clarke was resolute at centre.

After England created a seven-goal lead and held all of the momentum, New Zealand were forced to shuffle their hand again in mid-court. They worked hard but remained six down at the final pause.

The last 15 minutes were all about England, as they coolly managed the Silver Ferns staying in touch with them and then accelerated away with purpose.

Imogen Allison, who wasn’t part of Thirlby’s original 12, single-handedly illustrated their desire and confidence. Her late tip, followed by centre to goal third feed while falling out of court, raised the roof.

Cardwell returned at shooter and her vocal presence combined with the actions of the team to ensure England raced over the line.

After a day off, a rematch of the 2018 final on the Gold Coast now awaits with Australia in the semi-final on Saturday and England couldn’t be better prepared for it if they tried.