BREAKING NEWS
GMT+2 06:28
Home Politics Reporter Questions Jean-Pierre on Why Biden Is Forcing Catholics Like Himself To Fund Abortions Through Executive Order 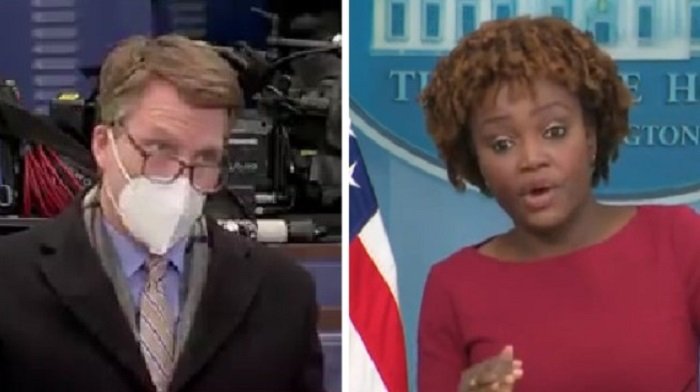 The President announced his actions on Wednesday.

The order directs Secretary of HHS Xavier Becerra to “consider actions to advance access to reproductive healthcare services, including, to the extent permitted by Federal law, through Medicaid for patients traveling across State lines for medical care.”

ABC News reports that Biden’s executive order leaves things “unclear” as to how “Medicaid coverage would avoid legal run-ins with the Hyde Amendment.”

The Hyde Amendment is a legislative provision passed in 1976 that prevents the use of federal funds for abortions, except to save the life of the woman or if the pregnancy arises from incest or rape.

Does Biden’s Executive Order on Abortion Violate the Hyde Amendment?

Owen Jensen, a correspondent with Eternal Word Television Network (EWTN), a Catholic-themed network, wondered how the executive order was not a violation of the Hyde Amendment.

Jensen, in doing so, accused the President of the United States of trying to force pro-life Americans and Catholics to pay for abortions, reminding Jean-Pierre of Biden’s own religious beliefs.

“Why does the president want to force pro-life Americans, including Catholics, which he is one, to subsidize abortions?”

The executive order does specify that actions taken by the HHS secretary be to “the extent permitted by Federal law.”

Jean-Pierre argued that the President is “working to ensure that pregnant women whose life and lives are in serious jeopardy receive the care that they need” and claimed the order carves out exceptions for medical providers based on religious or moral beliefs.

There is no mention of religious or moral beliefs in the text of the order, however.

Joe Biden’s executive order using taxpayer dollars to fund abortion travel could be subject to a lawsuit for violating the Hyde Amendment because it uses Medicaid funds.

It should immediately be struck down for violating federal law.

“On the proposal to have Medicaid fund travel expenses for women seeking abortion, how would that not violate Hyde if it’s using taxpayer dollars to pay for abortions?” he asked.

“This EO will not violate the Hyde Amendment, it is law, and we follow the law here,” Jean-Pierre insisted.

“On the proposal to have Medicaid fund travel expenses for women seeking abortions, how would that not violate Hyde if it’s using taxpayer dollars to pay for abortions?”

Biden repeatedly voted for the Hyde Amendment as a Senator but flip-flopped on the matter during his 2020 presidential campaign when radicals in his party demanded it.

Thanks, Joe. For listening to the American people. And thank you to the women who raised their voices. pic.twitter.com/O304t9cANV

Biden excluded the amendment from a 2023 budget proposal, while Senate appropriators proposed last week to end the provision. Republicans are expected to work to reinstate the Hyde language as part of budget negotiations.