BREAKING NEWS
GMT+2 03:18
Home Politics Who Was Jackie Walorski, The Congresswoman Who Recently Passed In An Auto Accident? 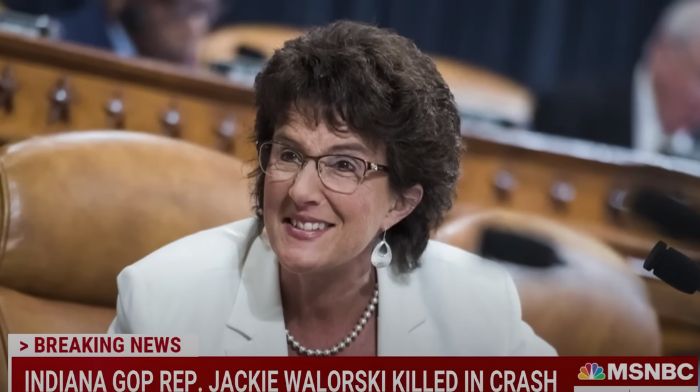 Who Was Jackie Walorski, The Congresswoman Who Recently Passed In An Auto Accident?

Family, friends, and colleagues in both Washington D.C. and Indiana are mourning the loss of Rep. Jackie Walorski (R-IN).

Walorski and two of her staff members were killed this week in a car crash in Elkhart County, Indiana. The driver of the other vehicle involved in the crash was also killed.

Walorski’s staff members were Emma Thomson, who handled communications, and Zachery Potts, who was her in-district director.

While the investigation into the collision by Elkhart County Police is still ongoing, initial reports from the Sheriff’s Department stated that the second vehicle crossed over the center line and hit Walorski’s car head on. The South Bend Tribune reports that police now say it was Walorski’s car that crossed the center line.

#BREAKING: U.S. Congresswoman Jackie Walorski (R-Indiana) has been killed in a crash that happened at 12:32 P.M. in Elkhart County on S.R. 19 south of S.R. 119. pic.twitter.com/SbvhWlHgxL

Jackie Walorski was born and raised in Indiana, growing up near South Bend. She attended Liberty College, and graduated from Taylor University with a bachelor’s degree in Communications and Public Administration. She started out her career as a reporter for South Bend CBS affiliate WSBT.

Walorski was also deeply rooted in her faith. She and husband Dean Swihart founded and operated a Christian ministry in Romania for four years as well.

Jackie Walorski began her political career by being elected to the Indiana State House in 2004 where she served three terms. She first ran for Congress in 2010, but lost to incumbent Democrat Joe Donnelly.

Once in Congress, Jackie Walorski was known for being a strong champion for children and families. She was also an outspoken voice for women in the GOP conference, and was instrumental in increasing the number of women in the conference. She was slated for a leadership role on the House Ways and Means Committee if Republicans take the House in November.

Before her untimely death, she authored 21 bills in the current 117th Congress.

.@KarenPence and I are heartbroken by the tragic passing of our dear friend Rep. Jackie Walorski. She served Indiana in the Statehouse and the Congress with integrity and principle for nearly two decades and will be deeply missed.

Shock And Sadness In Indiana

Reaction from Indiana and Washington D.C. was of sadness and disbelief at the news of Walorski’s death. In addition to former Vice President and fellow Hoosier Mike Pence, Indiana Gov. Eric Holcomb issued a statement in a series of tweets.

Janet and I are devastated by the tragic loss of our friend Congresswoman Jackie Walorski and her two staffers – Emma Thomson and Zach Potts – earlier today. Our broken hearts go out to her husband Dean and the entire family during this time of unimaginable mourning.

Fellow Hoosier and Congresswoman Victoria Spartz called her friend “a strong fighter for our country and our freedoms.”

My thoughts and prayers are with Congresswoman Jackie Walorksi’s family and all the families affected by this heartbreaking tragedy.

Jackie was a good friend and a strong fighter for our country and our freedoms. She will be missed dearly.

Our representatives and staff are valued and cherished members of our team and losing even a single person is heartbreaking, let alone three. Our caucus is sending thoughts, prayers, well wishes and hopes for peace to Rep. Walorski, Zachery and Emma’s families tonight.

RELATED: What Did We Do About Inflation Before Economists?

It is with a heavy heart that I am sharing this statement from the Office of Congresswoman Jackie Walorski. pic.twitter.com/UEPoKBDf5N

House Minority Whip Rep. Steve Scalise (R-LA) called Walorski “a champion for the people of Indiana.” He added, “Jackie and her staffers died serving her constituents. They will be missed, and our nation will miss their service.” Walorski had served on Scalise’s whip team.

I’m devastated to hear of the passing of my longtime friend and fearless fighter for Hoosiers, Congresswoman Jackie Walorski. She will be deeply missed.

Please join me in praying for her husband Dean, as well as the families of Zach Potts and Emma Thomson. pic.twitter.com/VlpYKQ1xuz

Rep. Drew Ferguson (R-GA) stated he was “at a loss for words.” He continued, “Jackie was a kind soul with a huge heart. She was a trusted colleague and good friend. There was no one who fought harder for her constituents than Jackie. I’m going to miss her terribly.”

Absolutely devastating news about the loss of @RepWalorski. I’m at a loss for words. Jackie was a kind soul with a huge heart. She was a trusted colleague and good friend.

House Republicans have lost two other members this year. Longest serving member of Congress Rep. Don Young of Alaska died in March at age 88, and Minnesota Rep. Jim Hagedorn who died in February after losing his battle with cancer.