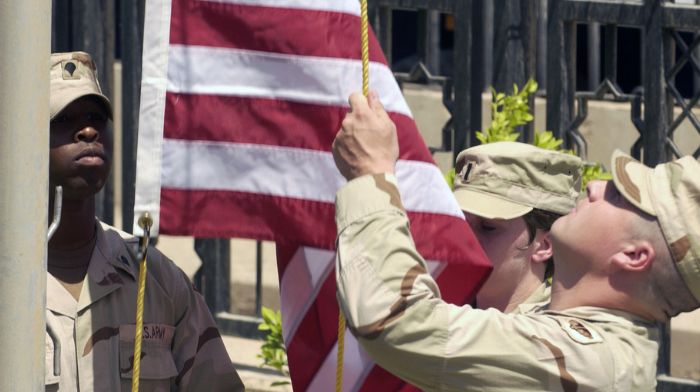 It was widely believed that the PACT Act would pass the Senate without incident. However, that proved wrong last week when a large group of Republicans reversed their original position on the legislation. The claim: Democrats had changed the original language reviewed earlier this summer.

The reversal caused quite the kerfuffle at the Capitol building, with comedian-turned-veteran advocate Jon Stewart at the center. He had some strong words for the flip-flopped Republicans. With celebrities choosing ridiculous pet projects to stand behind, it’s nice to see one sticking up for veterans.

Jon Stewart immediately after passage of the PACT act: “It feels good. Shouldn’t have been this hard.” pic.twitter.com/k8nr3ECkpl

Jon Stewart has been an ardent supporter of veterans’ issues for many years. This particular issue over care for burn pit-related conditions for veterans is one he’s been championing for quite some time. For those unfamiliar, burn pits were just as they sound; holes filled with plastic water bottles, styrofoam, batteries, paint cans, tires, and even ammunition.

Many of us had to work those burn pits, and I even slept in a tent next to one for nine months. As you can imagine, that kind of smoke breathing in and out isn’t good for your health.

Proximity to these burn pits has been linked to various respiratory illnesses and cancers. But unfortunately, until now, the Veterans Administration (VA) didn’t consider exposure to toxins as service related.

So what does that mean for veterans suffering from debilitating respiratory illnesses or terminal cancers? It means they had a high probability of their VA claims being denied to the tune of 75% of claims related to burn pits getting the denial stamp.

When he heard that Republicans had changed their minds on the bill last week, Mr. Stewart gave them an earful:

He ended his scolding with this dagger:

“And if this is America first, then America is f**ked.”

So why the change by Republicans?

We’ll never be able to repay the debt we owe to those who have worn the uniform, but today, Congress delivered on a promise to our veterans and their families.

The PACT Act will be the biggest expansion of VA health care in decades. We should all take pride in this moment. pic.twitter.com/l72HcsNJLw

The argument many Republicans who changed their mind last week gave was that the Democrats had changed the legislation’s original wording. Are they speaking the truth?

Not really. The wording in the legislation wasn’t changed other than a section unrelated to helping veterans with burn pit afflictions being removed.

So again, what was the problem? Perhaps it’s best to ask Pennsylvania Republican Senator Pat Toomey, who, in all fairness, was against the bill prior for the same reason he states now.

Senator Toomey’s argument then and now is that an accounting categorization in the bill would:

“…allow our Democratic colleagues to go on an unrelated $400 billion spending spree.”

When asked to elaborate, he clumsily stated:

“This is why they do this sort of thing. Because it gets very deep in the weeds and very confusing for people very quickly. It’s not really about veteran spending it’s about what category of government bookkeeping they put the veteran spending in.”

Why he didn’t just explain the accounting principle he didn’t like in the bill is beyond me. But, while government accounting is about as interesting as watching paint dry, the concept he is referring to isn’t that difficult to explain; I’ll lay it out for you.

Ted Cruz voted for the PACT Act in June.

Then Ted Cruz voted to filibuster the PACT Act in July.

Then Ted Cruz voted for the PACT Act today.

The text of the bill was the same every time.

An Issue of Governmental Accounting

The $400 billion Senator Toomey refers to was originally discretionary funding but was changed to mandatory funding. The difference between the two is relatively simple.

Discretionary funding is set by Congress and can be changed at any time. So if a program doesn’t appear to need as much money as it did the year prior, Congress can adjust the funding to better match the program’s needs.

Mandatory funding has predetermined amounts that are set by law, requiring an act of Congress to change. So the fear that Mr. Toomey and others like Senator Ted Cruz from Texas have is that if later it turns out the VA doesn’t need all this money to help veterans with burn pit ailments, it will be used in other ways without oversight from Congress.

To be fair, I think this is a valid point. However, some on the other side believe that some Republicans were merely lashing out over another bill.

“The less charitable explanation is this: Republicans are mad that Democrats are on the verge of passing climate change legislation and have decided to take out their anger on vulnerable veterans.”

Hard to say for sure if Mr. Murphy is correct on the correlation to the climate change legislation. But it wouldn’t surprise me that lawmakers use veterans as political pawns.

Vets and survivors have already waited too long for the health care and benefits they’ve earned—the Senate shouldn’t make them wait a moment longer.

They must pass the PACT Act now.

— Office of the Secretary of Veterans Affairs (@SecVetAffairs) July 29, 2022

A Win for Veterans?

With the PACT Act finally passing this Tuesday, veterans are hoping to get the care they deserve. However, those of us who have dealt with the VA remain skeptical.

Currently, the VA has 595,862 overall claims pending. Of those, 164,743 are considered backlogged because they have been pending for over 125 days.

It is estimated passage of this bill will add thousands more claims over the years since about 3.5 million of us were subjected to burn pit exposure. VA Secretary Denis McDonough promised:

“Once the president signs this bill into law, we at the VA will implement it quickly and effectively, delivering the care these veterans need and the benefits they deserve.”

With controversy still surrounding the VA over systems that don’t work, a clinic employee in Georgia beating a 73-year-old veteran, and a Florida VA clinic delaying care to a veteran with heart failure, I wouldn’t hold my breath over these new provisions providing relief anytime soon.

“I’m not sure I’ve ever seen this situation where people who have already given so much had to fight so hard to get so little.”

Unfortunately, that is what those of us who served are used to. “Support the troops” is a cliche often used to buy votes and look good on campaign photos.

As someone with many burn pit letters in my military medical files, I hope we someday get the support we deserve.