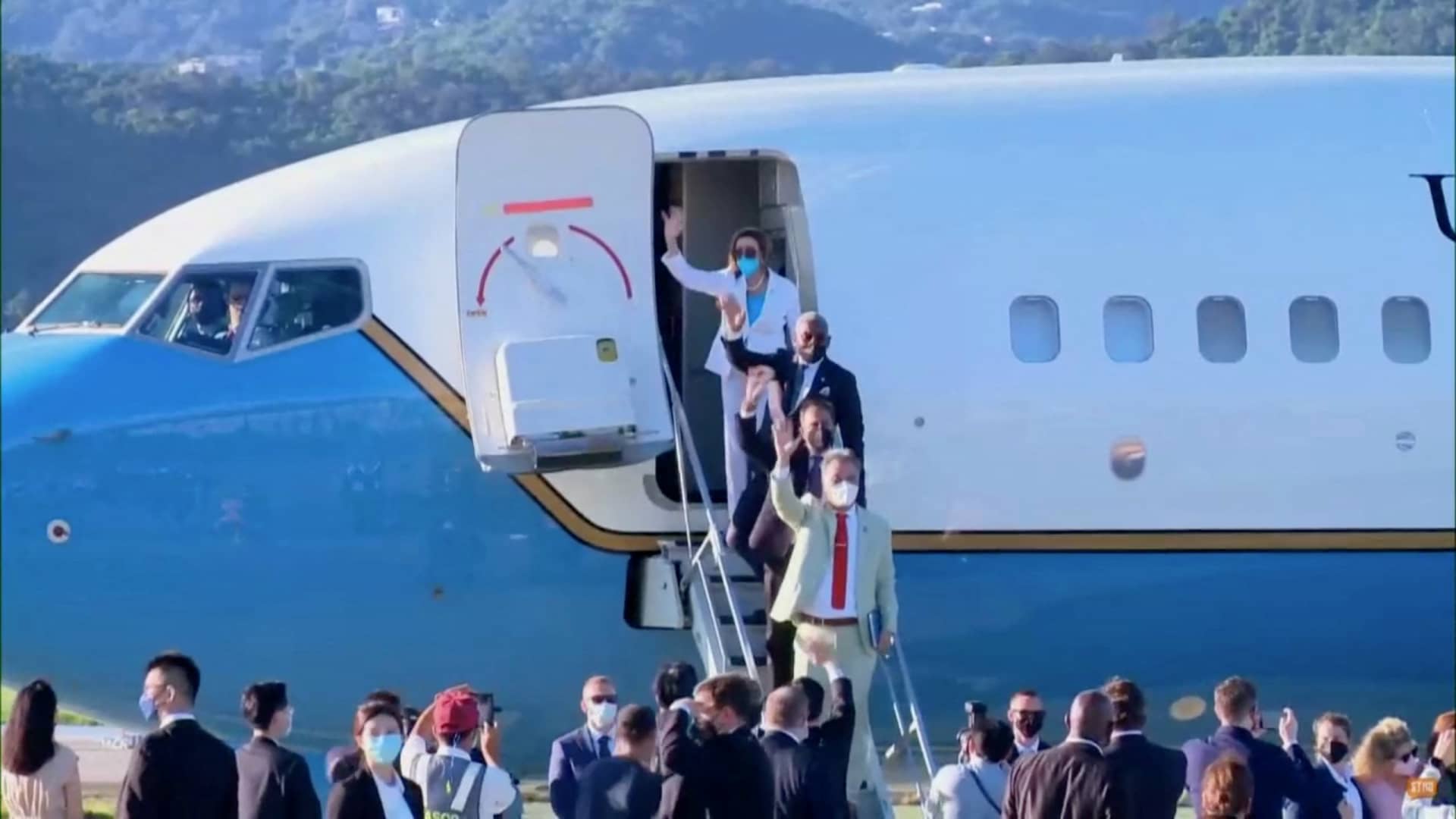 U.S. House of Representatives Speaker Nancy Pelosi waves with other members of the delegation as they board a plane before leaving Taipei Songshan Airport, in Taipei, Taiwan August 3, 2022, in this screengrab taken from video.

TAIPEI, Taiwan  — China said Friday it would halt cooperation with the United States on areas including military relations and climate change while imposing sanctions against House Speaker Nancy Pelosi, as Beijing stepped up its retaliation to her Taiwan visit.

The new measures were announced as military drills Beijing launched furiously in the wake of her trip earlier this week sent warplanes, naval ships and missiles menacingly close to this small island democracy despite growing criticism.

The U.S. delegation’s unannounced visit to Taiwan has fueled a mounting crisis, raising fears of conflict in the region and stoking tensions between Washington, its allies and Beijing.

Beijing said Friday it will cancel military phone calls between area commanders, defense meetings and cooperation on anti-drug efforts with the U.S., and will no longer take part in talks on maritime safety and climate change. Earlier, China took personal action against Pelosi, announcing sanctions on the speaker and her immediate family in response to what the Chinese Foreign Ministry called her “egregious provocations.”

The unspecified sanctions, China’s latest retaliation for the brief trip to the self-ruling island it claims as its own territory, came as Pelosi vowed not to let Beijing isolate Taiwan, while Washington and its allies urged de-escalation.

“They may try to keep Taiwan from visiting or participating in other places, but they will not isolate Taiwan by preventing us to travel there,” Pelosi said Friday in Japan, the last stop of her Asia tour.

China’s response had until now largely been directed at the island of over 23 million people that lies just across the Taiwan Strait.

Beijing began a second day of military drills surrounding the island Friday morning, apparently sending multiple military vessels and aircraft across the median line in the strait that had been an unofficial buffer zone for decades.

A day earlier, it fired ballistic missiles, at least one of which it boasted had flown directly over the island and five of which Japan said had landed in its exclusive economic zone waters.

The Taiwanese Defense Ministry has neither confirmed nor denied that missiles flew over Taiwan. If true, it would mark the first time Chinese missiles have flown over the self-ruled island.

The ministry slammed the exercises as “highly provocative.”

“The Ministry of National Defense pointed out that the Chinese army’s military exercises, whether it is launching ballistic missiles or deliberately crossing the strait’s median line, are highly provocative acts,” the military news agency reported Friday, adding that the ministry said it was committed to not escalating the situation.

“China has chosen to overreact and use Speaker Pelosi’s visit as a pretext to increase provocative military activity in and around the Taiwan strait,” he said at a media briefing during a meeting with the Association of Southeast Asian Nations in Cambodia

“There is no justification for this extreme, disproportionate and escalatory military response.”

The drills, which began Thursday, are expected to last until Sunday.

The Chinese Communist Party has never ruled Taiwan, but claims it as its own territory. While Chinese President Xi Jinping sees Taiwan’s “reunification” with the mainland as a historic inevitability, recent public opinion polls show the majority of Taiwanese have no desire to become part of China, and instead want to maintain the status quo.

China repeatedly warned the U.S. against the visit, which it said “seriously infringes upon China’s sovereignty and territorial integrity.” The White House says the speaker’s visit was consistent with U.S. policy on Taiwan and should not be used to precipitate a crisis.

“We call on the international community to support democratic Taiwan and put a halt to these unilateral, irrational military exercises,” she said according to a statement on her official Facebook page.

Taiwan’s neighbors and U.S. allies in the region have expressed growing concerns about China’s display of aggression.

Tokyo on Friday called on China to immediately stop its drills. “China’s actions this time around have a serious impact on the peace and stability of our region and the international community,” Japanese Prime Minister Fumio Kishida said.

“As for the ‘exclusive economic zone’ you mentioned, you should know, and the Japanese side should also know that China and Japan have not yet demarcated the relevant waters, so there is no such thing as ‘Japan’s exclusive economic zone’,” Hua Chunying, a spokesperson for the Chinese Foreign Ministry, told a news briefing.