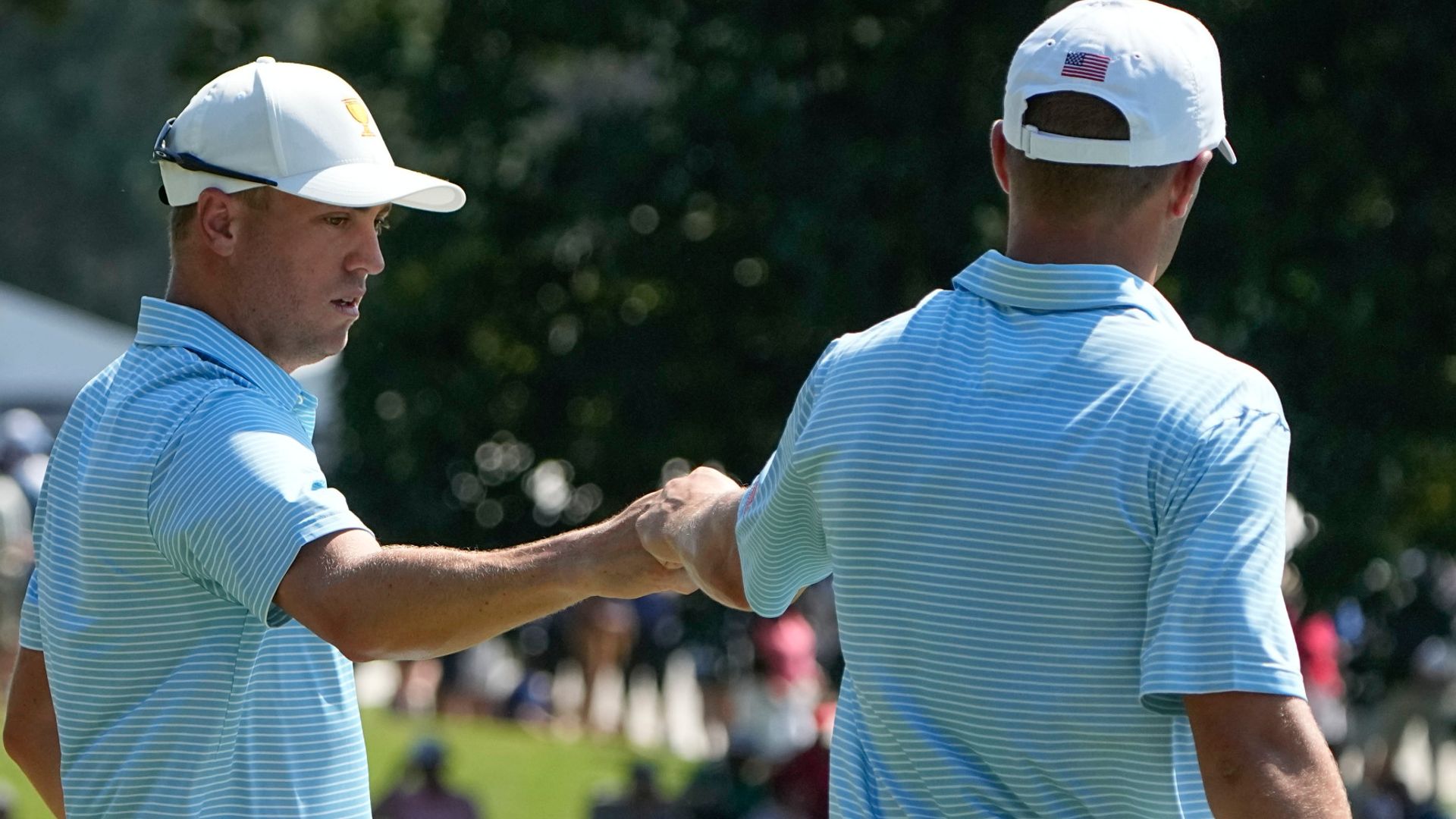 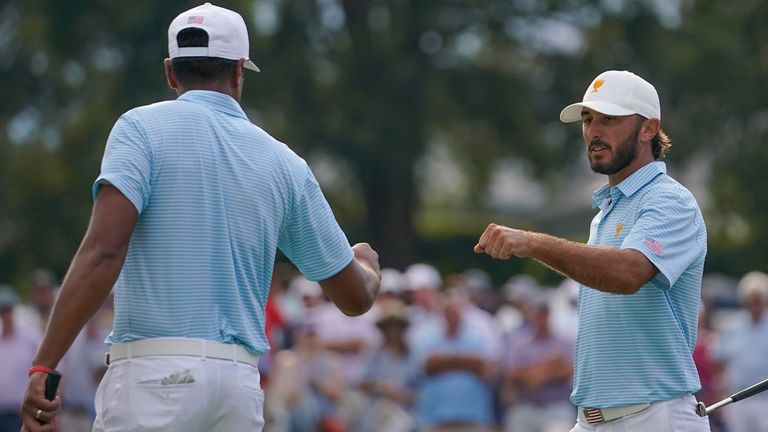 Highlights from the opening round of The Presidents Cup, held at the Quail Hollow Club in Charlotte, North Carolina.

Highlights from the opening round of The Presidents Cup, held at the Quail Hollow Club in Charlotte, North Carolina.

Team USA lived up to their pre-tournament billing as Presidents Cup favourites by racing into a 4-1 lead against the International Team after the opening session in North Carolina.

The United States have dominated the biennial competition, winning the last eight editions and only losing one of the 13 previous contests, with Davis Love III’s team quickly taking control of this year’s event during the Thursday foursomes at Quail Hollow Club.

A star-studded American line-up won the first three matches on the course against a depleted International Team, containing eight rookies and lacking experience due to several high-profile departures to LIV Golf, with the hosts briefly threatening to complete a clean sweep of the session.

Si Woo Kim and Cam Davis produced a remarkable fightback to stun world No 1 Scottie Scheffler and Sam Burns, although that was the only point won for the International Team after Taylor Pendrith and Mito Pereira suffered a final-hole loss in the remaining match on the course.

How Team USA moved ahead

Trevor Immelman’s decision to send out experienced pair Adam Scott and Hideki Matsuyama – the only two players in the International Team with multiple Presidents Cup appearances – in the opening match backfired, as they were thrashed 6&5 by Patrick Cantlay and Xander Schauffele.

The American pair never trailed and only lost one hole during an impressive victory, winning the first four holes of their back nine to continue their 100 per cent foursomes record when playing together for Team USA.

Justin Thomas and Jordan Spieth made three birdies in a four-hole stretch on their front nine, only for Sungjae Im – the top-scorer for the International Team in their 2019 loss, to make a 10-foot eagle at the seventh and birdie the ninth to reduce the lead for him and Corey Conners to one at the turn.

Momentum in that match swung Team USA’s way when Thomas holed a 25-foot putt to save par at the 15th, which was enough to win the hole when Conners missed from eight feet, with pars over the next two holes enough for a 2&1 victory.

Cameron Young marked his Presidents Cup debut by holing from 25 feet on the penultimate hole for a winning birdie to give him and Collin Morikawa a 2&1 win over Tom Kim and K.H Lee in the third match, with that point guaranteeing Team USA would lead after the opening day.

Scheffler and Burns looked set to deliver more success after moving three ahead after just seven holes and remained two up with four to play, only for a three-putt double-bogey at the par-four 15th paving the way for a late International Team recovery.

Davis nudged in for a winning par and Kim levelled the contest with a 10-foot birdie at the next, with a close-range birdie at the 17th and kick-in par at the last completing a four-hole winning streak and 2up victory for the visitors.

The final match also went to the par-four last, where a two-putt par from Tony Finau and Max Homa was enough for a narrow victory when Pereira hit a wayward final drive and then Pendrith failed to save par from 10 feet.

“We hung in there,” Immelman said. “We got off to a real tough start and were behind the eight ball early. The Americans played some brilliant golf and I think we’re going to have to find a way of making some putts over the next few days. We’ll hang in there and keep fighting – that’s what we do.”

Five matches of fourballs take place on Friday, with four more matches of both formats being played across two sessions on Saturday. All 24 players then compete in singles matches on the final day, with a total of 30 points up for grabs across the four tournament days.

Watch the Presidents Cup throughout the week live on Sky Sports. Live coverage begins on Friday from 4.30pm via the red button, before moving to Sky Sports Golf at 5.30pm.