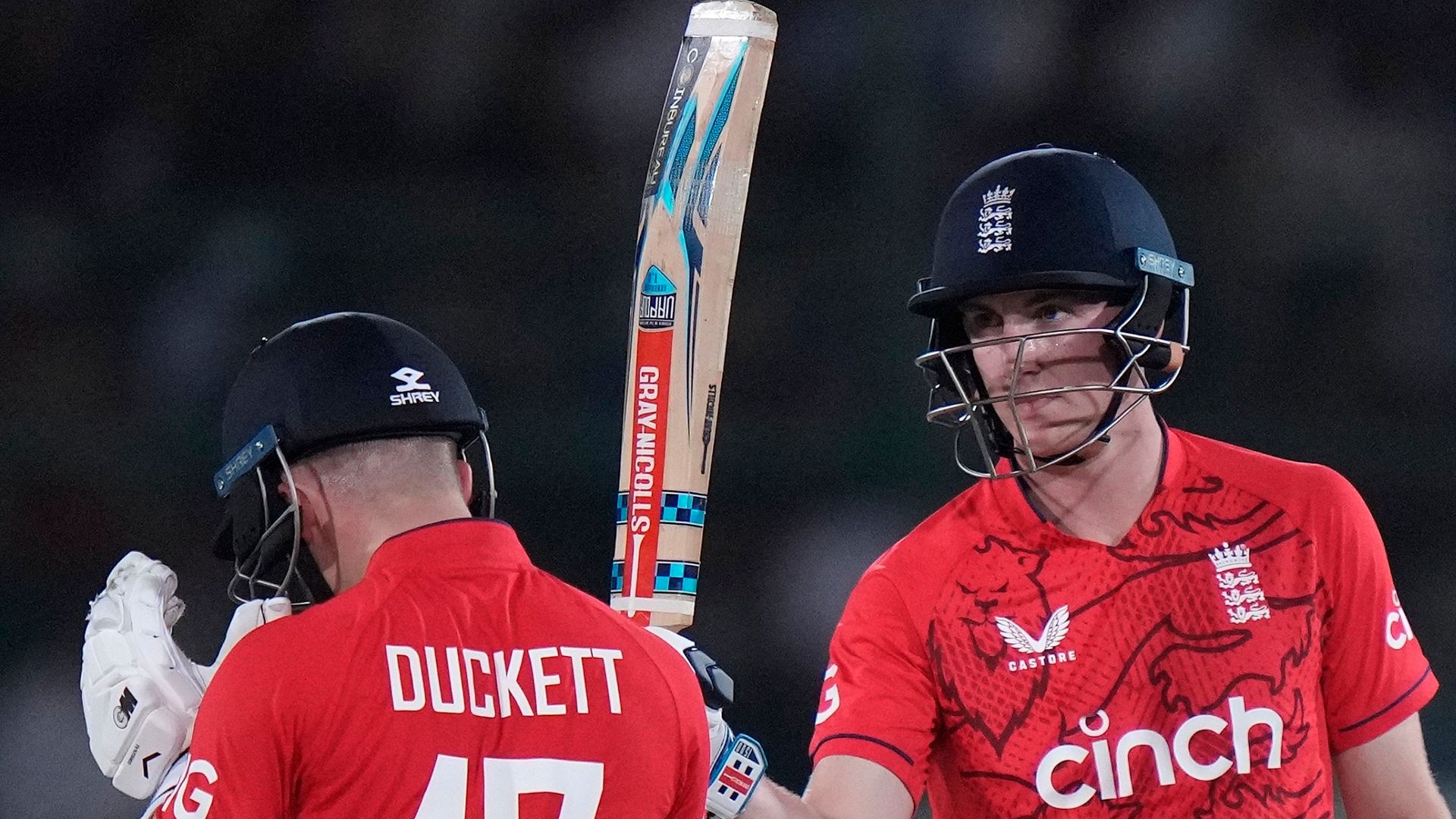 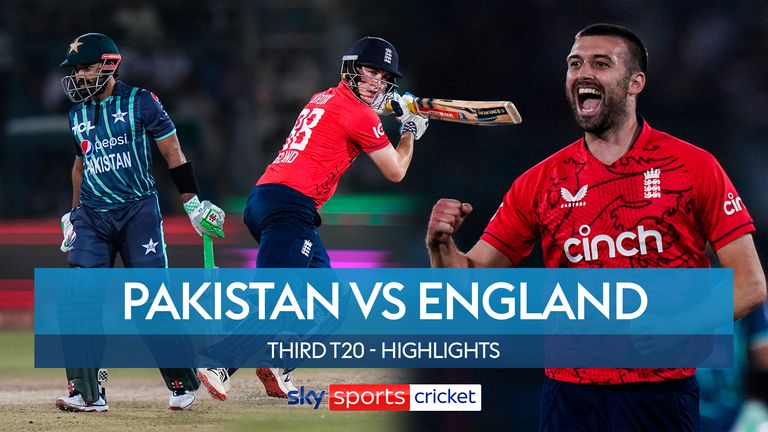 England retook the lead in their T20I series with Pakistan after a brilliant unbeaten century stand between Harry Brook and Ben Duckett set up a dominant 63-run victory in Karachi.

Brook struck 81 from just 35 deliveries, while Duckett added 70 from 42 balls as England posted 221-3 after being put in to bat, with debutant Will Jacks having got the tourists off to a strong start with 40 from 22.

Pakistan, who had chased down 200 without losing a wicket to level the series on Thursday, were unable to repeat their batting heroics as the returning Mark Wood (3-24) took two early wickets to give England a stranglehold on the game that Moeen Ali’s side never relinquished.

The victory gives England a 2-1 lead in the seven-match series, which resumes in Karachi on Sunday before moving to Lahore for the final three games. 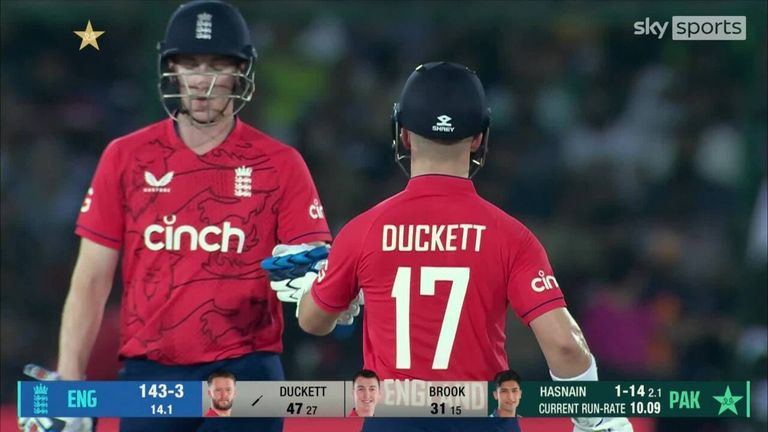 A maiden T20I half-century for Brook, 23, in addition to his strong performances in the first two games, offered further proof he is fast establishing himself as a key member of England’s short-format team ahead of next month’s World Cup in Australia.

Unlike Duckett, who also struck his first T20I half-century, Brook is part of the squad for the tournament, and is making himself near-undroppable, despite the impending returns of Liam Livingstone and captain Jos Buttler from injury, and England Test captain Ben Stokes from a period of rest.

Pakistan captain Babar Azam won the toss for the first time in the series and chose to bowl, as both skippers once more appeared to underestimate the quality of the pitch awaiting them.

There was added intrigue at the start of England’s innings, with Jacks making his international debut in place of the rested Alex Hales having established a positive reputation for Surrey in recent years.

He gave a glimpse of his potential in the first over, punching Mohammad Hasnain’s final delivery over mid-wicket for the first boundary of the match. Pakistan got an early breakthrough in the third over as Phil Salt miscued an attempted slog towards mid-off, with Mohammad Nawaz doing extremely well to hold onto a catch that both he and the bowler, Hasnain, went for.

Dawid Malan, who had been dismissed first ball 24 hours earlier, continued to look out of form as he struggled to 14 from 15 balls before being caught at deep mid-wicket off Usman Qadir.

Jacks, put under more pressure by Malan’s struggles, answered the call, displaying his power with a series of boundaries that helped England end the powerplay at 57-1. 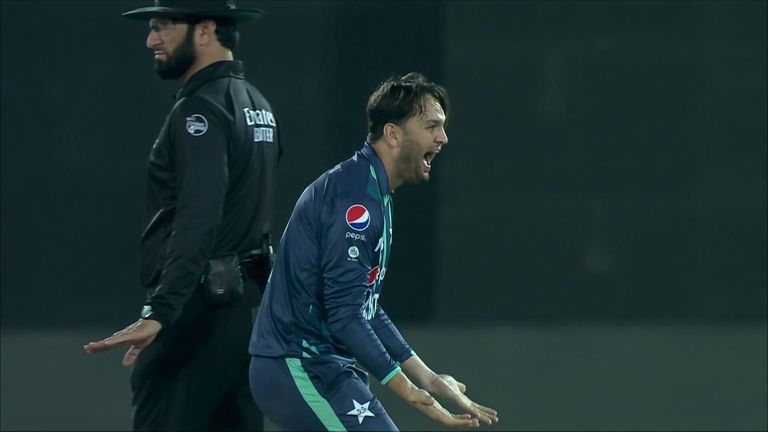 Attempting to press on, Jacks’ debut innings came to an end in the ninth over, as he came up short attempting to hit Qadir over mid-wicket, leaving Nawaz to take another good catch.

That brought Duckett, who had started his innings with two boundaries from his first three balls, together with Brook with England at 82-3 in the ninth over.

The pair remained patient up until the halfway stage of the innings, but Brook signalled his intentions in the first over after drinks by smashing Qadir for two sixes, the second of which was an exquisite shot over extra cover.

Duckett maintained England’s momentum the following over as he used his favoured sweep shot to hit the previously economical Nawaz for successive boundaries. 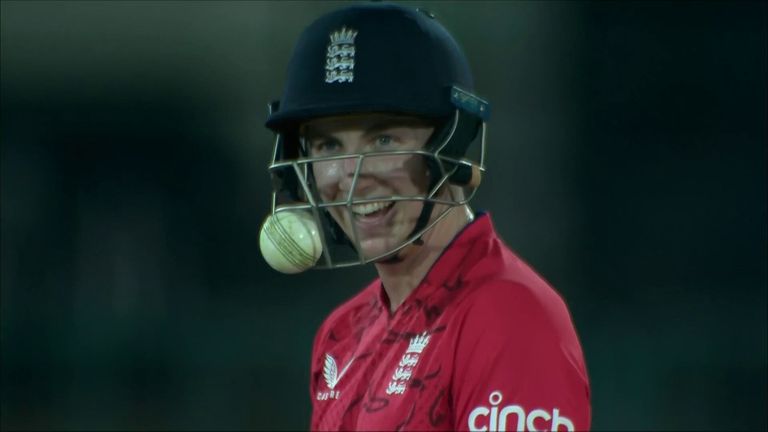 In a very unusual moment, the ball gets wedged into England batter Harry Brook’s helmet grill!

In a very unusual moment, the ball gets wedged into England batter Harry Brook’s helmet grill!

Shahnawaz Dahani, one of Pakistan’s heroes with two wickets in two balls on Thursday, came in for heavy punishment as Brook struck him for three boundaries in four balls, including a huge six into the leg side.

Babar rang the changes with his bowling, but nothing could slow England, with Duckett adding his only six with a well-timed pull off Hasnain.

Brook even had time to right the wrong of his dismissal in the previous game, using the ramp shot that had got him out on Thursday to secure the only boundary of the final over, as England posted a total that would surely be out of Pakistan’s reach.

Babar and Mohammad Rizwan had on Thursday pulled off the highest chase in T20I cricket without losing a wicket, but they faced a different proposition with Reece Topley and Mark Wood returning to the England attack in place of Luke Wood and David Willey.

They quickly managed to pose more problems for the Pakistan openers, with Babar escaping in Topley’s first over as Malan put down a tricky chance at extra cover.

It didn’t prove significant, as Wood, playing his first match since March, dismissed the Pakistan captain in the next over, with Topley taking a good catch on the third-man boundary. Topley ensured there would be no further heroics from Rizwan either, bowling the other Pakistan opener with a slower ball with the final delivery of the following over.

The situation quickly worsened for Pakistan as Wood, who clocked speeds as high as 97mph with his bowling, had Haider Ali caught by Adil Rashid to make it two wickets from two balls for England.

Sam Curran removed Iftikhar Ahmed the following over to leave Pakistan at 28-4, and the contest as good as over.

Shan Masood and Khushdil Shah attempted a fightback, but their partnership of 62 came to an inevitable end as Rashid dismissed the latter in the 12th over. 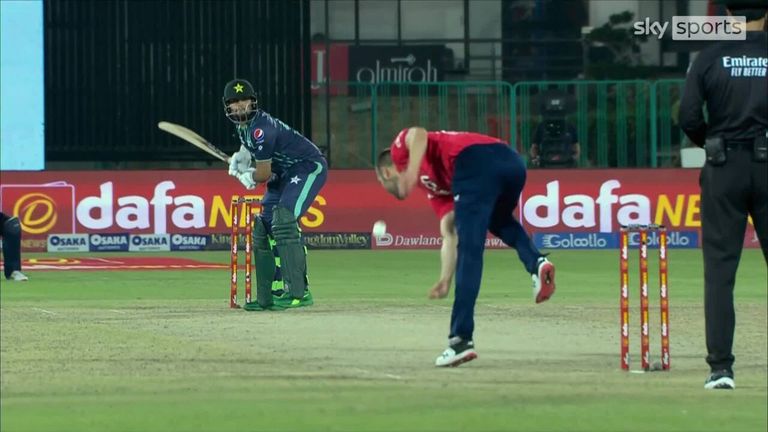 Shan continued to battle, finishing unbeaten with 65 from 40 balls, but Rashid added the scalp of Nawaz and Moeen ran out Qadir to help maintain England’s total control.

Wood put the finishing touches on his impressive comeback, removing Haris Rauf in the penultimate over, before Topley was left to close out a victory that had long been assured.

England will now need to manage Wood’s workload for the remainder of the series, with the Durham quick set to provide a much-needed express option at next month’s World Cup. 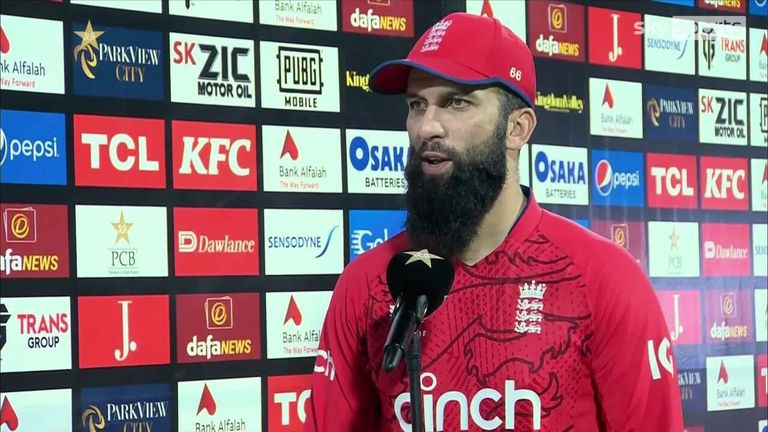 England captain Moeen Ali: “I felt that was a brilliant win. We were ruthless tonight, in my opinion, with the bat in particular.

“I thought that partnership [Ben Duckett and Harry Brook] was outstanding with two really good players. Brook is showing how special a player that he can potentially be.

“He looks amazing, in our opinion, and hopefully he grows and becomes one of the top, top players.

“With the ball as well, we were outstanding.” 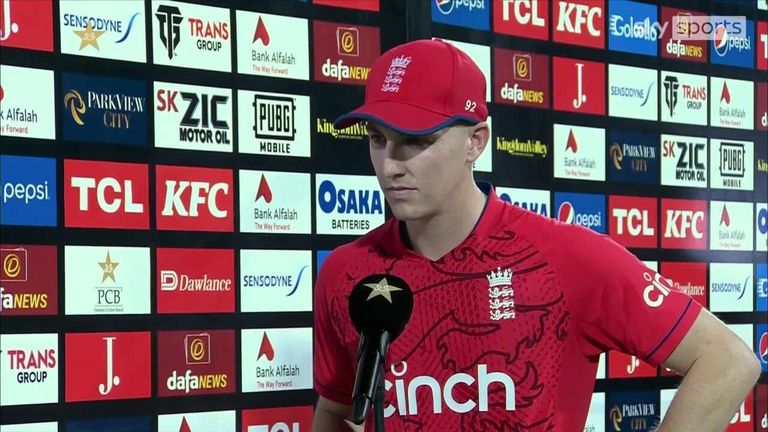 England batter Harry Brook: “It was very nice to get out there and have a match-winning performance tonight.

“It was quite similar to the other night, every pitch has been fairly similar, so just hitting through the line of the ball and trying to play on the front foot as much as possible – just having a solid game plan and sticking to it.” 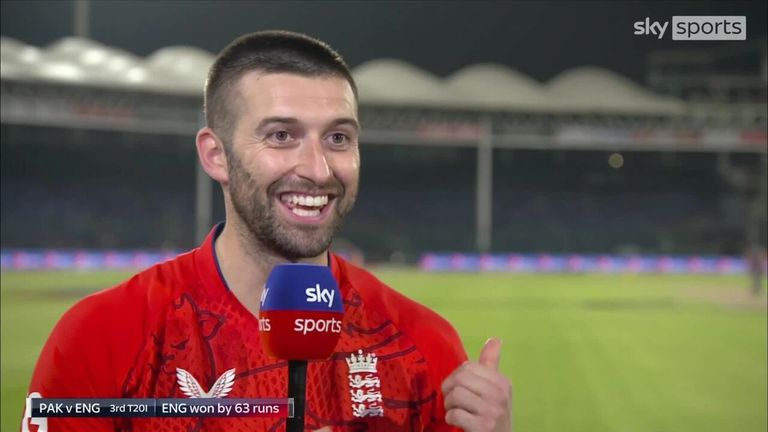 England bowler Mark Wood: “I felt pretty tired at the end. I know it’s a T20 but it’s the intensity of international cricket. I’ll rest up and be good to go again hopefully in the future.

“I’ve done loads of time in the gym, lots of running, but nothing’s the same as playing a game. It’s just a different intensity, but I’m absolutely fine.

“They (Babar and Rizwan) played really well the last game, so it was a big wicket to try to get them early doors. Toppers bowled a fantastic over before I came on, and that allowed me to try to be a bit more attacking with my bowling.”

The players have a much-needed day off on Saturday after back-to-back games, before returning the National Stadium for a final contest in Karachi on Sunday.

That one is live on Sky Sports Cricket at 3:30pm, with build up from 3pm.

The series will then conclude with three matches in Lahore, starting on Wednesday, with every ball live on Sky Sports.

Before this series resumes, England’s women complete their home summer with a long awaited return to Lord’s to face India on Saturday, live on Sky Sports Cricket from 10:30am.