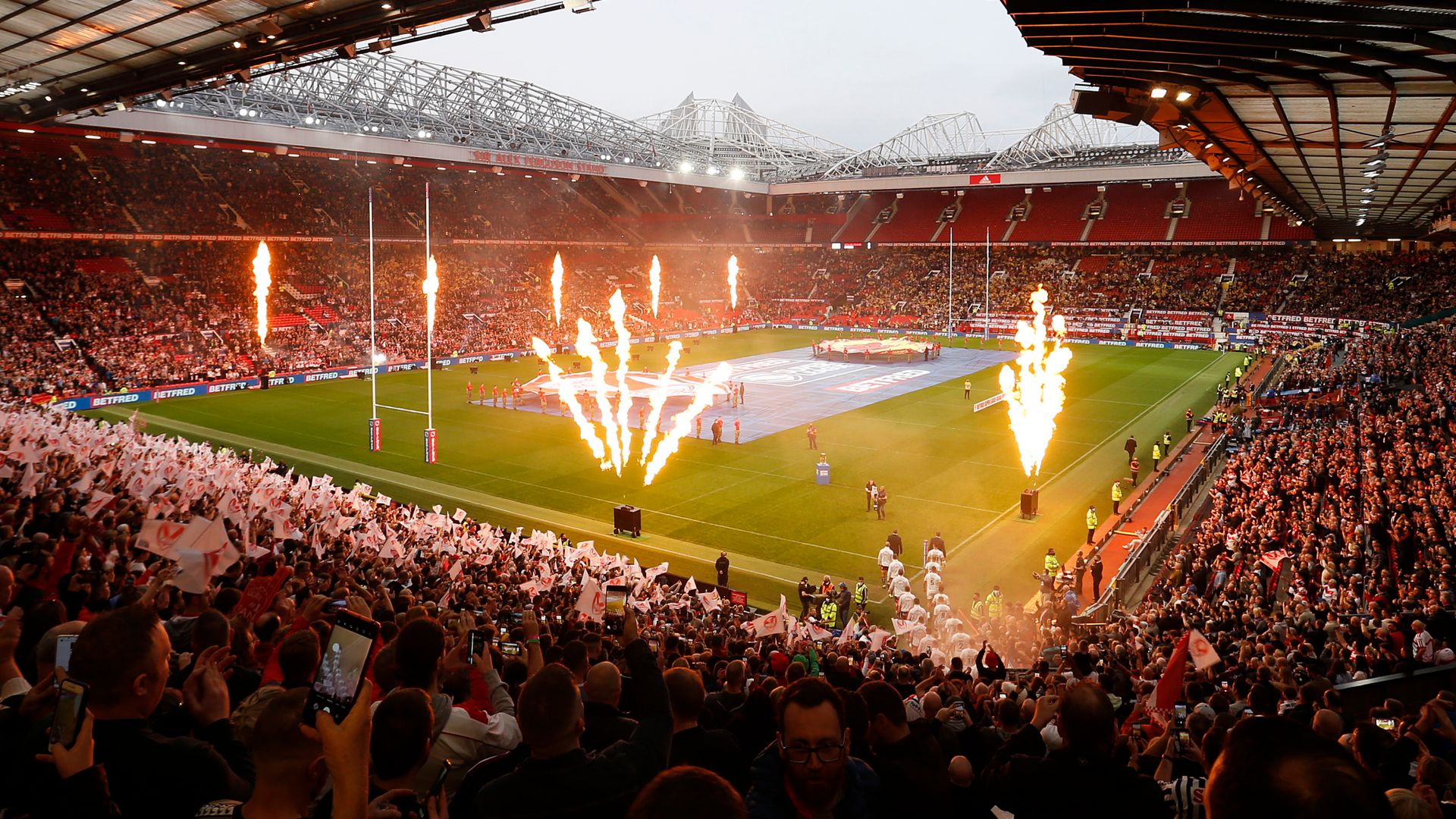 Ever since Wigan Warriors defeated Leeds Rhinos 10-4 in that first edition way back in 1998, the title-decider has thrown up plenty of moments which remain talked about to this day.

This year’s opponents Leeds and St Helens have been involved in plenty of those, and ahead of their clash, we take a look at some of the spectacular, surprising, and controversial moments from the previous 24 seasons…

When coaches lose their cool 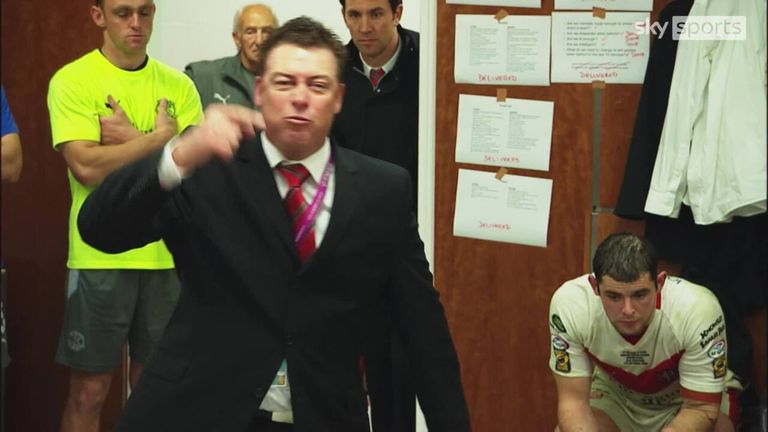 St Helens head coach Daniel Anderson was caught on camera giving his team a blast at half time in the 2008 Grand Final.

St Helens head coach Daniel Anderson was caught on camera giving his team a blast at half time in the 2008 Grand Final.

The Grand Final is an intense occasion for players and coaches alike, as was shown in 2008 when St Helens head coach Daniel Anderson was captured unloading on his players by the dressing room camera as they trailed 12-6 to Leeds Rhinos at half-time.

Reigning champions Saints had taken the lead through James Graham but converted tries from Lee Smith and Ryan Hall had Leeds in front at the break, leading to Anderson losing his cool.

His attempts to motivate his team did not work though as the Rhinos went on to triumph 24-16 for the second of three straight Grand Final wins over St Helens. 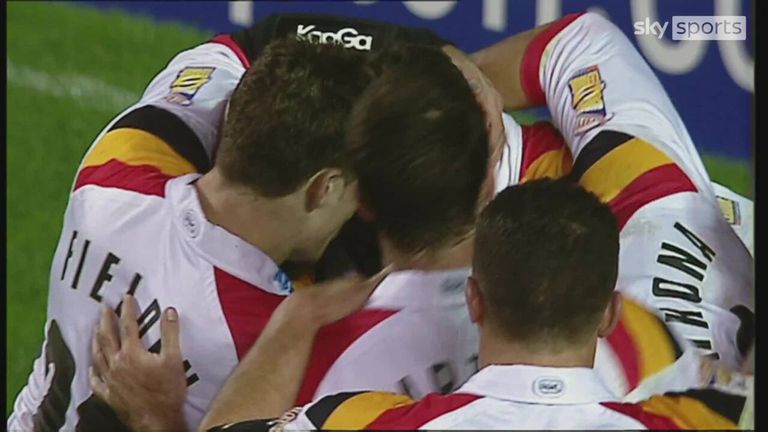 Bradford Bulls’ Michael Withers became the first player to score a hat-trick of tries in the Super League Grand Final in 2001.

Bradford Bulls’ Michael Withers became the first player to score a hat-trick of tries in the Super League Grand Final in 2001.

The fourth edition of the Grand Final in 2001 saw Bradford Bulls lift the Super League trophy for the first time and it came on the back of a memorable try-scoring display from full-back Michael Withers.

The Australia-born Ireland international became the first player to run in a hat-trick of tries in the Old Trafford showpiece, claiming the Harry Sunderland Trophy for player of the match as the Bulls triumphed 37-6.

Not only that, but Withers remains the only player to have scored a hat-trick of tries in the Grand Final heading into this year’s edition. 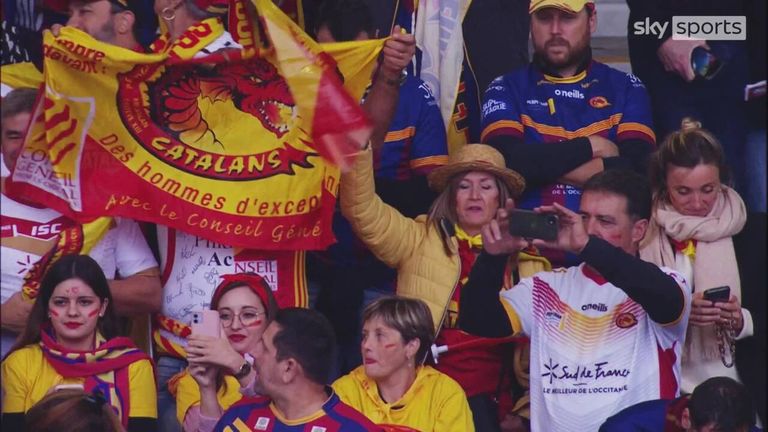 Catalans Dragons became the first overseas team to play in the Grand Final when they took on St Helens in 2021.

Catalans Dragons became the first overseas team to play in the Grand Final when they took on St Helens in 2021.

We take the short trip back in time to last year when Catalans Dragons became the first French club to reach the Super League Grand Final.

The Dragons had already made history in 2018 by becoming the first overseas team to win the Challenge Cup and went to Old Trafford with the League Leaders’ Shield in the bag as well.

There would be no fairy-tale conclusion for Steve McNamara’s team though as they were edged out 12-10 by reigning champions St Helens, who became only the second team to win three Grand Finals in a row. 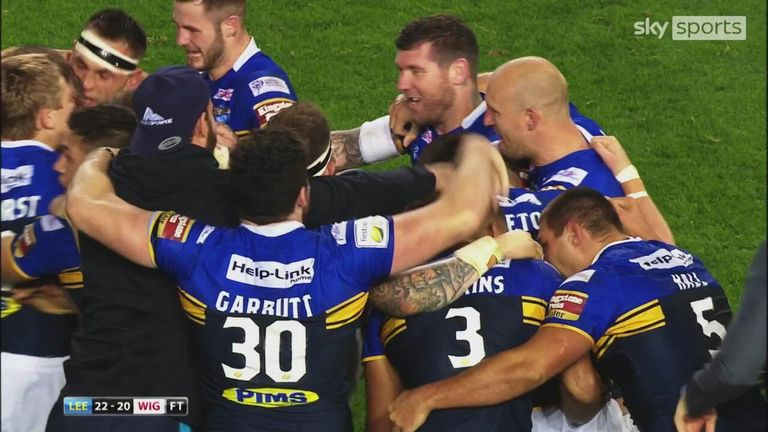 Back to 2015 for our next memorable moment and it was a year which saw Leeds send three of their modern-day greats out on high with a thrilling 22-20 win over Wigan Warriors.

The Rhinos entered the decider at Old Trafford having already clinched the League Leaders’ Shield and Challenge Cup, and eager to send Kevin Sinfield, Jamie Peacock and Kylie Leuluai out on a high.

It proved to be the perfect finish to stellar careers for the trio as Leeds held out for victory, with Sinfield contributing by kicking three goals. 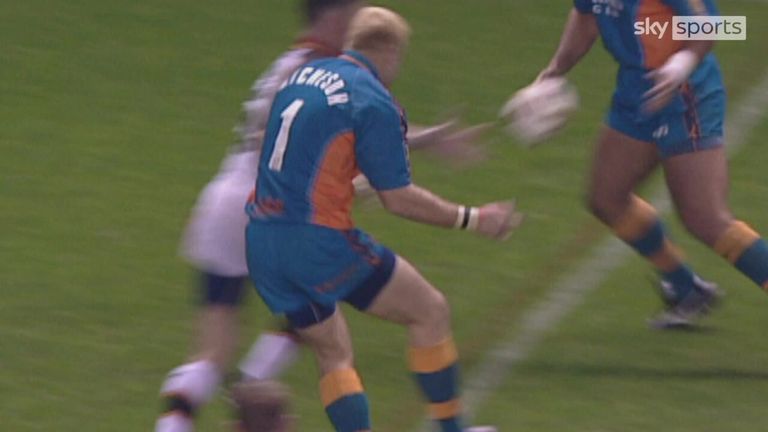 The video referee denied Leon Pryce and Bradford Bulls a try after Michael Withers’ pass was controversially deemed to have been forward.

The video referee denied Leon Pryce and Bradford Bulls a try after Michael Withers’ pass was controversially deemed to have been forward.

Another moment featuring Withers, although one the Bradford man would rather forget after a controversial decision went against him and the Bulls in their 1999 defeat to St Helens.

With Saints attacking, Withers intercepted and countered before sending Leon Pryce, celebrating his 18th birthday, racing away to score under the posts – only for referee Stuart Cummings to go upstairs to the video referee.

The try was then chalked off after Withers was controversially deemed to have knocked on while making that interception and it would prove a crucial call as St Helens went on to edge out Bradford 8-6. 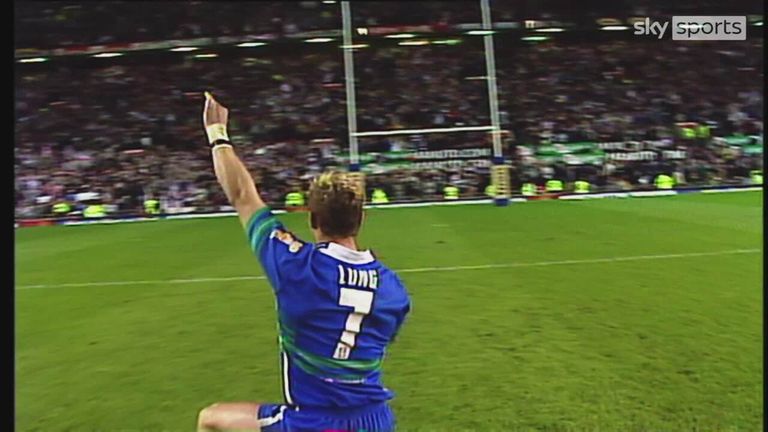 Another St Helens-Bradford Grand Final and another controversy, this time from 2002 and a conclusion which still rankles in West Yorkshire as the Bulls ended up being edged out 19-18.

A pulsating match had seen Sean Long kick a drop goal to edge Saints in front in the closing stages, with Bradford going for a short kick-off from the restart which was recovered by their opponents.

Chris Joynt then took the ball up and went to ground, with Bradford’s players appealing to referee Russell Smith it was a voluntary tackle, which would have given them a penalty in kickable range to win it. Mr Smith was unmoved though and Saints went on to win, much to the Bulls’ chagrin. 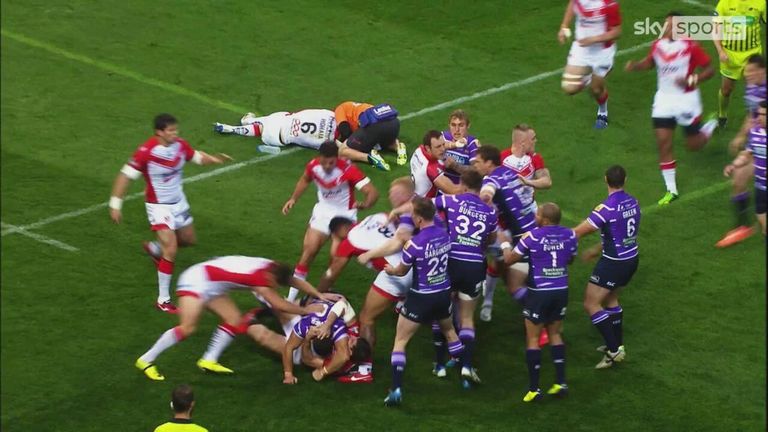 Tempers flared in the 2014 Grand Final after Ben Flower was sent off barely two minutes in for punching an opponent.

Tempers flared in the 2014 Grand Final after Ben Flower was sent off barely two minutes in for punching an opponent.

Undoubtedly the most infamous incident in the history of the Grand Final came in 2014 when Ben Flower was sent off with barely two minutes gone of Wigan’s clash with St Helens.

The prop was dismissed for punching Lance Hohaia in the face while the Saints man was on the ground and sparking a mass brawl, with the Warriors going on to lose 14-6.

There were long-term consequences for both players too. Flower was banned for sixth months for the incident, while Hohaia would retire the following year due to recurrent concussion-type symptoms.

Welsby wins it at the last Teenager Jack Welsby provided a memorable conclusion to the 2020 Grand Final by snatching victory for St Helens at the last.

Teenager Jack Welsby provided a memorable conclusion to the 2020 Grand Final by snatching victory for St Helens at the last.

The 2020 Super League season will go down in history for all sorts of reasons, not least of all because of the impact of the Covid-19 pandemic on the competition.

It produced arguably the most thrilling finish in Super League history too as a 19-year-old Jack Welsby announced himself on the biggest stage of all in the only Friday night Grand Final, held behind closed doors in Hull.

With St Helens and Wigan locked at 4-4 and golden point looming, Tommy Makinson launched a last play drop goal. It hit the posts as the hooter sounded, but Welsby sprinted in and dived on the ball in-goal to snatch victory for Saints, cueing scenes of wild celebration among the players. 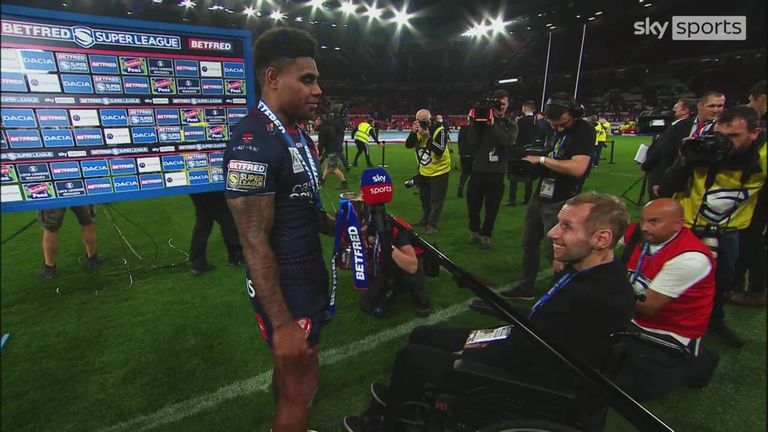 Kevin Naiqama was an emotional man after he won the Harry Sunderland Trophy in 2021, collecting the award from Rob Burrow.

Kevin Naiqama was an emotional man after he won the Harry Sunderland Trophy in 2021, collecting the award from Rob Burrow.

Another moment from last year’s Grand Final and this time in involved Kevin Naiqama, who signed off his time at St Helens with a Harry Sunderland Trophy-winning display against Catalans.

Naiqama grabbed both tries for Saints as they claimed a third-straight Grand Final triumph and afterwards gave an emotional interview.

That emotion was heightened by the fact he was collecting the player of the match award from Rob Burrow, expressing his gratitude to the former Grand Final winner now battling motor neurone disease. 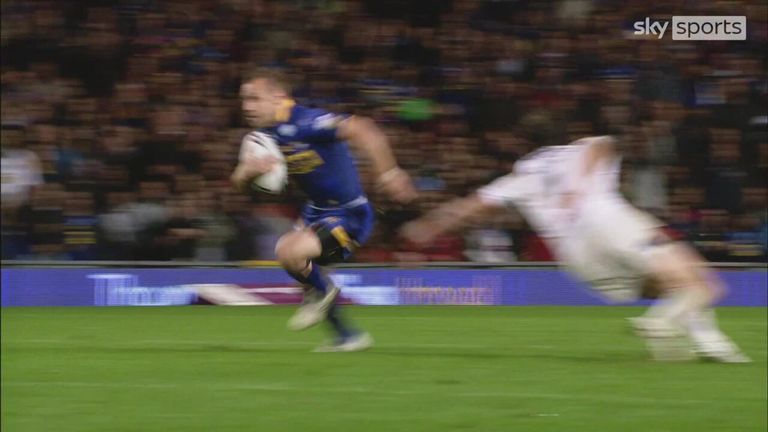 Rob Burrow wrote his name into Grand Final history with his stunning solo try which set Leeds Rhinos on course for victory in 2011.

Rob Burrow wrote his name into Grand Final history with his stunning solo try which set Leeds Rhinos on course for victory in 2011.

You didn’t think we had left this one out, did you? Last but by no means least, it is one of the most iconic moments of the previous 24 Grand Finals and one which remains perhaps the greatest try scored in the Old Trafford showpiece.

It came just as the first half of the 2011 final between Leeds and St Helens moved into the final 10 minutes and began with Burrow taking the ball on halfway following a pass out of dummy-half from Danny Buderus.

In the blink of an eye, Burrow broke the Saints line and then stepped full-back Paul Wellens before racing away to leave would-be tacklers grasping at thin air for an unbelievable try. It was a score which set the Rhinos on course for a 32-16 win and contributed to Burrow becoming part of an elite group to be awarded the Harry Sunderland Trophy for a second time.