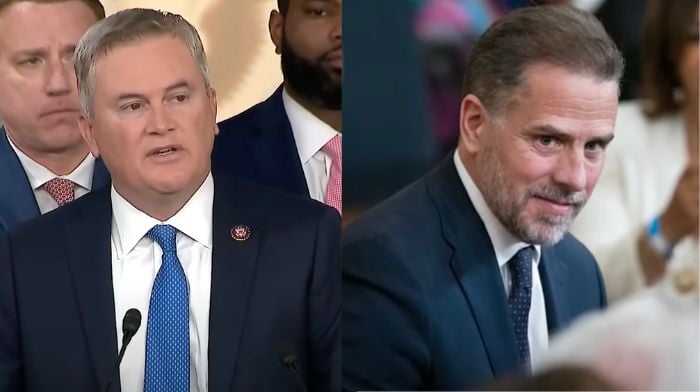 GOP Goes On the Offensive: Will Subpoena Hunter Biden

Republicans have wasted no time beginning the shift in power in Washington D.C.

Rep. James Comer (R-KY), who will become Chairman of the House Oversight Committee in January, announced Thursday that the committee will subpoena Hunter Biden regarding his overseas business dealings, and the Biden family’s connections to those deals.

During the announcement of the probe at the Capitol, Comer had this to say, “This is an investigation of Joe Biden. The President of the United States, and why he lied to the American people about his knowledge and participation in his family’s international business schemes. National security interests require the committee conduct an investigation, and we will pursue all avenues. Avenues that have long been ignored.”

Comer also added, “In the 118th Congress, this committee will evaluate the status of Joe Biden’s relationship with his family’s foreign partners, and whether he is a president who is compromised, or swayed by foreign dollars and influence.

Comer repeated, “This is an investigation of Joe Biden, and that’s where the committee will focus in this next congress.”

NEW HOUSE OVERSIGHT CHAIR JAMES COMER: “I want to be clear. This is an investigation of Joe biden” pic.twitter.com/R0SUhQtxDk

But Comer’s tough stance might not be as tough as he wanted it to sound. He recently sat down for an interview with CNN’s Pamela Brown and talked about subpoenas for the Bidens.

Brown asked Comer, “If they don’t give you the information, you would then use subpoenas. But are there any discussions, plans to eventually subpoena Joe Biden and or his son, Hunter Biden?”

Brown then asked, “Why then would you not subpoena Joe Biden if this is all about Joe Biden?” Comer seemed to begin to explain by saying, “Well, it’s complicated to subpoena a president of the United States…”

Brown interrupted him and said, “But it has been done with several presidents…”

Comer then gave an explanation as to where the difficulty in serving a subpoena on a sitting president might be, saying, “It has been done. And the Democrats sent out subpoenas like junk mail. And that’s why it’s hard to get people to come in.”

And how many of these “conspiracy theories” turned out to be true?

A lot of them.

Is There Any ‘There’ There?

Comer also appeared Wednesday night with Fox News host Sean Hannity, and stated that, “The first thing we’re gonna be able to prove tomorrow (Thursday), is that Joe Biden lied to the American people when he said he had no knowledge of Hunter Biden’s business dealings. Not only did he have knowledge, we also have evidence that shows he was a large part of Hunter’s business dealings.”

Comer also said, “Now we’re going to investigate Joe Biden to see if in fact this White House is compromised.” He concluded by stating, “We’re going to make it very clear that this is now an investigation of President Biden.”

On Thursday, the House Oversight Committee also released a 32-page report on the investigation into the entire Biden family.

The report states that investigations will continue, and that the new Congress could draft legislation on government employees’ family members, and their ability to solicit or interact with any government officials for the purpose of financial gain.

I am fully prepared to use the power of the Oversight Committee to hold the Biden family accountable for their shady business dealings.