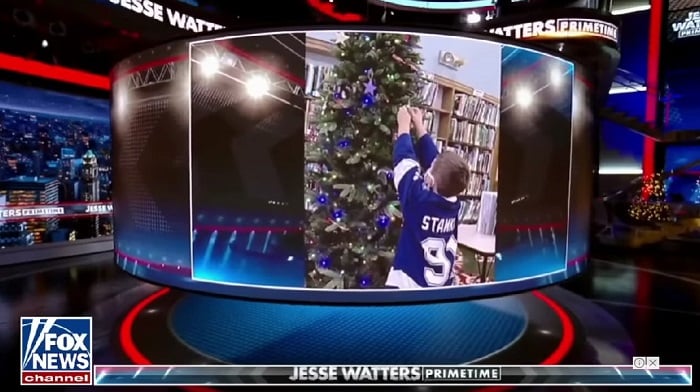 A Human Rights Commissioner in Massachusetts was forced to resign after she posted a profanity-laced tirade mocking God and Christians on Facebook.

Diane Loud, who has also been an LGBT activist within the community, described God as a “magic sky daddy” and called Christmas “happy horses***.”

The controversy began after it was revealed the Dedham Public Library wouldn’t be putting up their Christmas tree this year due to complaints by some that it made them ‘uncomfortable.’

“I have never posted a negative post on Facebook,” she wrote earlier this month. “That is, until now. I found out today that my beautiful library will not have it’s Christmas tree this year.”

“When I asked, I was told ‘people’ were made uncomfortable last year looking at it. I’m sorry WHAT? In my 28 years at the Dedham Public Library, I have never heard a negative comment,” Desmond added.

A few days after posting about the Christmas tree controversy, Desmond added a screenshot of comments made by Human Rights Commissioner Diane Loud.

Loud publicly blasted Desmond as “a selfish f****** b****” and accused her of “putting people’s lives in danger.”

“For a tree? For a motherf***ing tree? You have put people’s lives in a lot of danger. A LOT of danger,” she continued.

Ah, the ever-tolerant left and their support for human rights.

Not content with attacking Desmond personally, Loud pivoted to mocking Christians over their beliefs.

“I hope the fact that you – who claim to believe in Christ and Christmas or whatever happy horses*** you’re trying to hide behind – are the least gracious, most hateful, most disgusting trash in the world,” she continued.

“Is this what you think your magic sky daddy wants? Where in the Bible was this again?”

Human Rights Commissioner Diane Loud took part in an LGBT pride parade in the community earlier this year where she “tried to hold back tears” at the event.

“I think it’s really important for everybody to be celebrated and feel affirmed,” she said according to a Patch article.

Everybody needs to be celebrated and feel affirmed, eh? Well, ain’t that some happy horses***.

Compare that to her latest comments:

“In closing, I would like to add a F*** YOU, YOU PIECES OF TRASH. I hate each and every one of you and I do wish great suffering on you. You are terrible, terrible people. And you did it all because you didn’t get your way. You are despicable,”

Loud proves once again, the least tolerant people in this country are the ones who preach to others about how tolerant they should be.

And now, the Human Rights Commission has announced Loud’s resignation.

“HRC Member Diane Loud has stepped down from her position on the Dedham Human Rights Commission,” they wrote. “We sincerely appreciate Diane’s service and look forward to working with the Commission on Disabilities to find a representative to take her place.”

Even better? Now the Dedham Public Library and a sister branch have announced they would be displaying the Christmas tree after all.

“As we finish decorating for this holiday season, Christmas trees will be put up at both locations,” the director said.