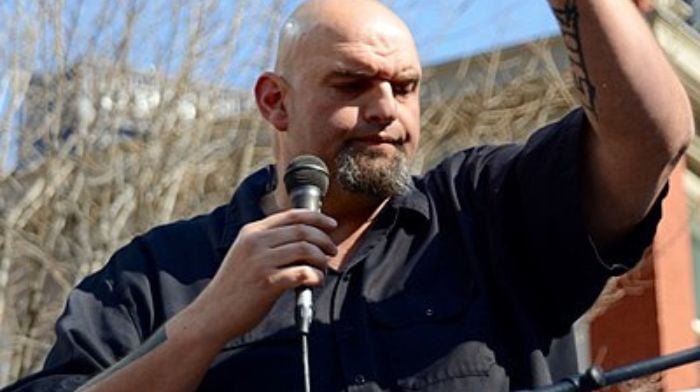 Pennsylvania Senator-elect John Fetterman is going Hollywood. Fetterman has recently been named to the New York Times list of ‘Most Stylish People of 2022’ and is set to appear in an upcoming movie starring actor Christian Bale.

No, we’re not kidding. Ogre-chic is making a splash.

The Times put Fetterman on a list of other presumably fashionable individuals and called him ‘stylish.’

“The senator-elect from Pennsylvania is going to bring Carhartt to the Capitol,” they wrote in a simple one-sentence blurb, referencing the famed blue-collar clothing line worn by the man who has literally never had a job and still got an allowance from mommy and daddy into his 50’s.

The entry also linked to a glowing article from May of 2022 in which Fetterman’s ‘style’ is discussed at length in a 26-paragraph analysis.

“Combined with his shaved head, goatee and tattoos … the effect practically reeks of that word so beloved of the political class, and so rarely associated with them: Authenticity,” they beamed.

Senator-elect John Fetterman of Pennsylvania was named one of the 93 “most stylish” people of the year by The New York Times. https://t.co/SpJkK61KWC pic.twitter.com/JQQiUGHpaK

Fetterman is Not Only Stylish, He’s Got Movie Star Looks

It isn’t just about his impeccable style either. Nay, John Fetterman is more than just stylish – he’s got movie star-quality looks too.

Just ask Christian Bale, star of the upcoming Netflix movie The Pale Blue Eyes, in which the Pennsylvania Democrat will be making an appearance.

From the moment he laid eyes on Fetterman, Bale knew he was the man for the role. Any role. Because he looks like he’s straight out of the early 19th century.

“John’s got this incredible face,” Bale said at a forum following a recent screening of the film.

The actor said he pushed his director to throw Fetterman somewhere into the mix. “That’s a face that fits in the 1830s.”

Christian Bale got John Fetterman to do a cameo in his new period movie because he has a ‘face that fits in the 1830s’ https://t.co/VLvBqGJHip

Bruh, that’s a face that belongs in a movie in which the main character is named Quasimodo. Or perhaps in a remake of The Goonies as Chunk.

Fetterman posted an image from the set and announced his cameo late last week.

“It me + G + Christian Bale circa 1830,” he said, referencing the fact that his wife also appears in the movie.

RELATED: John Fetterman’s ‘Painful’ Debate Performance Was So Horrific Even Liberals Are Shocked

I can’t tell you how badly I hope that Fetterman has a line during his movie cameo. And I hope to God it’s: “Hi. Good night everybody.”

It would be a hallmark moment in cinematic lore.

Or maybe a little dance number to the tune of ‘SexyBack” by Justin Timberlake:

Them other senators don’t know how to act (yeah)

Can’t help if my jaw is always slacked (yeah) 🎶

Okay, maybe that’s too much to ask.

Fox News host Tucker Carlson had a field day with the news on Fetterman being named to the New York Times ‘Most Stylish’ list.

“So you assumed John Fetterman was wearing his found-in-the-dumpster oversized hoodie to hide the massive bulge on the side of his neck, but no!” Carlson joked. “It was a Balenciaga-level fashion statement.”

He continued, unable to stifle a smile while speaking.

“The ugly is beautiful.”