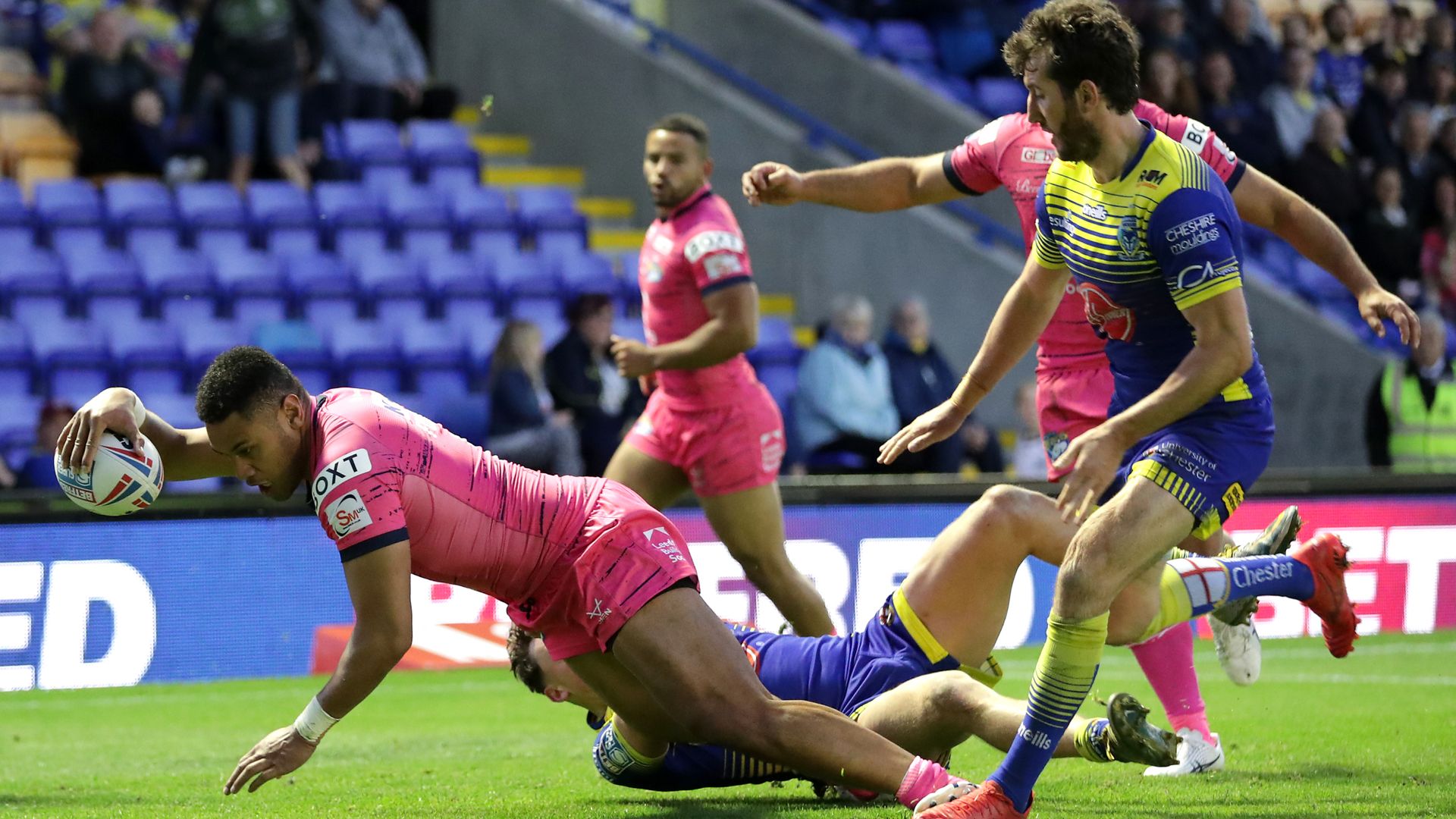 Life under their new coach remains sweet for Leeds Rhinos after they thrashed Warrington Wolves in the Super League on Friday; visitors rained in eight tries in rampant win; Huddersfield Giants bounce back from their Challenge Cup final heartbreak with victory over Catalans Dragons Leeds continued their revival under new coach Rohan Smith with a 40-4 destruction of an embarrassed Warrington, while Huddersfield won at Catalan Dragons.

A fourth win in five games – the last two with Smith in charge – enabled the Rhinos to leapfrog their opponents into eighth place in Super League, just two points off the top six, while Warrington’s fourth successive defeat means their play-off hopes are virtually over.

The manner of the Wolves’ latest capitulation will be particularly concerning to coach Daryl Powell.

They had shown distinct signs of improvement in their last match against St Helens but were booed off the pitch at the Halliwell Jones Stadium after conceding eight tries to one. 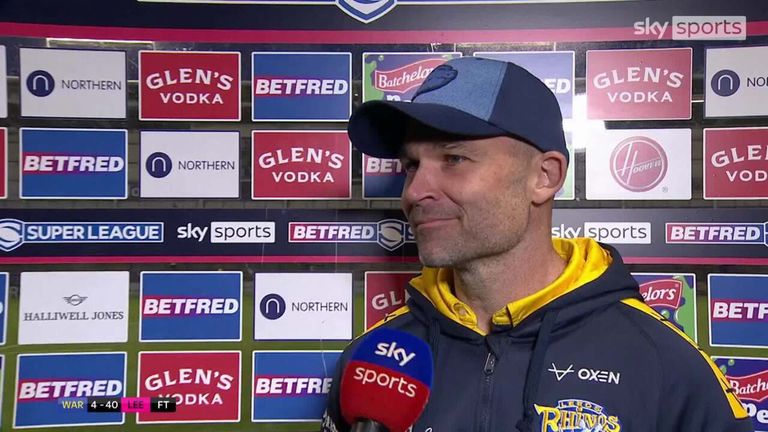 The game was evenly balanced for much of the first half but was turned by three tries from the visitors in a devastating five-minute period in the second quarter to enable them to open up a 20-4 lead.

Leeds were clinical on their first raid into Wolves territory with right winger David Fusit’u’a touching down captain Kruise Leeming’s accurate kick to the corner to score the first of his two tries.

Warrington were quickly back on the attack and centre Peter Mata’utia and Williams were both held up over the line before left winger Matty Ashton took Widdop’s pass to touchdown acrobatically for an equalising try. 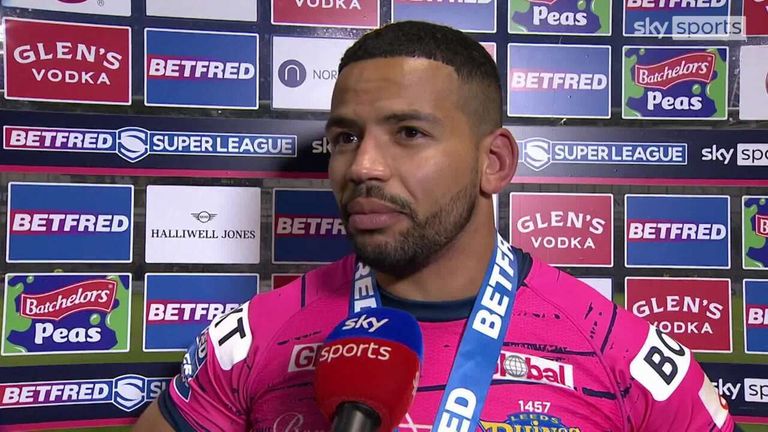 The Wolves undoubtedly shaded the opening quarter but the game swung dramatically before half-time as Leeds found a purple patch.

Full-back Zak Hardaker broke through to put Leeming over before spinning out of Billy Margoulias’ attempted tackle for a try of his own and Rhys Martin kicked both conversions to make it 16-4.

Former Warrington stand-off Blake Austin then hoisted a high kick for winger Ash Handley to push the ball into the hands of his centre Liam Sutcliffe and second rower James Donaldson was on hand to finish off.

Boos rang around the stadium as the teams went down the tunnel and the mood of the home fans hardly improved when Martin kicked a penalty six minutes into the second half to extend the visitors’ lead to 22-4.

Leeds were temporarily reduced to 12 men in the 58th minute when Donaldson was shown a green card for attempting to slow play down but it did nothing to slow their momentum.

The Wolves’ unhappy night was summed up on the hour when Ashton broke through the first line of defence only for forward Matty Davis to spill the final pass and Leeds cut loose with three more tries in seven minutes.

Handley went over straight from a scrum, Thompson forced his way over from dummy half and Fusitu’a wrong-footed the Wolves defence to score his second try of the night.

Handley then applied the finishing touches to an emphatic victory when he raced 90 metres for an interception try and Martin wrapped up the scoring with his fourth goal from nine attempts.

Elsewhere on Friday night, Huddersfield Giants bounced back from their Challenge Cup final heartbreak with a 22-14 victory over Catalans Dragons.

Ian Watson’s side, boosted by the return of Will Pryce from a 10-match ban, shook off their loss to Wigan by completing a league double over the Dragons.

Huddersfield had to weather a second-half comeback from Les Dracs but a late second try by second-rower Chris McQueen sealed the win.

The visitors were first to score after full-back Tui Lolohea launched a 40/20 kick and the Dragons conceded two early penalties then centre Ricky Leutele stepped easily through a gaping defence on the left to touch down after three minutes, Pryce unable to convert from out wide.

The Giants went further ahead in the 12th minute with a Pryce penalty.

Sam Tomkins was penalised for petulance by referee Chris Kendall and hooker Adam O’Brien stepped through a huge gap to race 30 metres and score between the posts to put Huddersfield 12-0-up after 23 minutes as Pryce added the extras this time.

The Giants showed the way three minutes before half-time when stand-off Jack Cogger raced 30 metres through some sloppy defence to release second-rower McQueen for a try converted by Pryce.

All the Dragons had to offer was a Tomkins penalty on the stroke of half-time, putting them on the scoreboard at 18-2.

Scrum-half Arthur Mourgue put Les Dracs back on track two minutes into the second half when he sidestepped over for a try from 10 metres out, converted by Tomkins.

Scrum-half Arthur Mourgue put Les Dracs back on track two minutes into the second half when he side-stepped over for a try from ten metres out, converted by Tomkins.

Then young French centre Matthieu Laguerre celebrated his new two-year contract with a dummy and jink over the line from the same range and Tomkins converted to put just four points between the sides with 25 minutes left to play.

Dragons captain Ben Garcia was held up over the line as Catalans continued to press.

the home side thought they were level when Lolohea fumbled a high kick and Laguerre mopped up the loose ball and crossed the line but referee Kendall ruled he was offside.

Huddersfield turned the screw with five minutes remaining, forcing the Dragons into two goal-line drop-outs and McQueen struck the killer blow with a defence-splitting five-metre strike just before the final hooter.