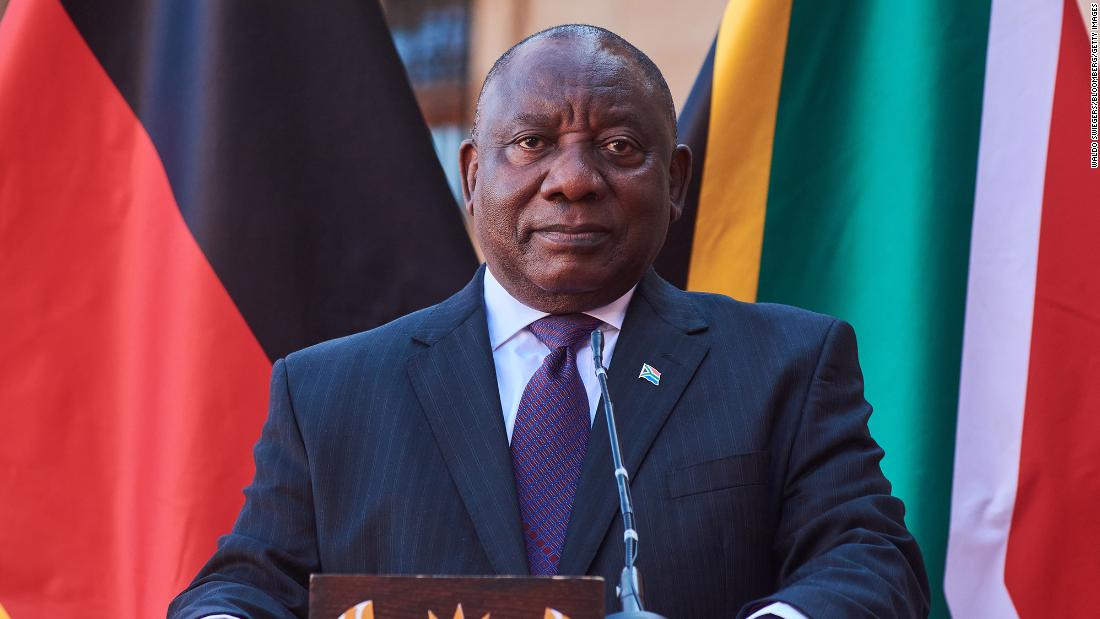 Johannesburg (CNN)South African President Cyril Ramaphosa has hit back at allegations of improper conduct over large amounts of cash stolen from his wildlife farm in 2020.

“Some are casting aspersions about me and money. I want to assure you that all this was money from proceeds from selling animals. I have never stolen money from anywhere. Be it from our taxpayers, be it from anyone. I have never done so. And will never do so,” he said while addressing members of the ruling African National Congress (ANC) party on Sunday.

His words were greeted with applause.

The allegations came in a bombshell statement released by former spy chief Arthur Fraser last week, which has riveted South Africans and exposed the rifts in the ANC.

Fraser said he has opened criminal charges against Ramaphosa that, he claims, contain evidence of “photographs, bank accounts, video footage and names” related to multiple claims of wrongdoing, including kidnapping of suspects and bribery.

He has not publicly released any of the evidence he claims to possess.

In a publicly released statement, a police spokesperson confirmed that a case of money laundering, defeating the ends of justice and kidnapping was registered at the police station in Rosebank, Johannesburg on Wednesday afternoon. The spokesperson said due process would follow.

In response to the allegations of crimes and a cover-up, the President’s office released a statement acknowledging that the theft from Ramaphosa’s farm took place and said he was “not involved in any criminal conduct and once again pledges his full cooperation with any police investigation.” The President was out of the country at the time of the burglary, according to his spokesperson.

According to Fraser, the allegations relate to the theft of more than $4 million hidden at Ramaphosa’s farm in the northern province of Limpopo, where the President was involved in a lucrative and legal big game trade for years. Ramaphosa is disputing that sum.

Fraser alleges the theft occurred with the collusion of a domestic worker and claims that the theft was concealed from police and the revenue service. He says Ramaphosa paid the culprits for their silence.

A spokesman for the President told South Africa’s news24 outlet that the police protection unit was aware of the theft, but no case was registered with police.

The official opposition Democratic Alliance says it will be writing a letter to the tax revenue authority over the tax compliance of the apparent cash sale of wildlife. At this stage, no evidence has been released that indicates tax evasion.

“The President is facing a crisis of credibility and cannot hide behind procedural smokescreens to avoid presenting South Africans with the full truth around the money that was stolen from his farm, and the subsequent cover-up,” John Steenhuisen, the leader of the Democratic Alliance, said in a statement released Monday.

Fraser was the head of the State Security Agency (SSA) during part of the tenure of former President Jacob Zuma. During a far-reaching anti-corruption commission, witnesses accused Fraser and the SSA of targeting political opponents, including Ramaphosa. Fraser has denied those allegations repeatedly and said witnesses were lying.

In September last year, as the then National Commissioner of Correctional Services, Fraser was widely criticized for granting parole to Zuma for medical reasons.

Zuma was serving a 15-month sentence for contempt of court. His arrest is believed to be behind, at least in part, the widespread chaos and looting that ensued in July 2021.

The parole decisions were ruled unlawful by the High Court. Zuma’s legal team is appealing the ruling.

Ramaphosa has made fighting corruption a centerpiece of his presidency. But that fight has exposed deep rifts within the ANC.

Last week, the presidency released an image showing a threat it said was sent to a senior government member demanding that the President not proceed with the findings of the anti-corruption commission and calling for the release of suspects arrested for the murder of a Department of Health whistleblower. The photo shows a single bullet with the letter.

Ramaphosa faces a fractious ANC elective conference in December. The President’s office said it won’t comment further on the theft cover-up allegations and said due process should be allowed to take its course.