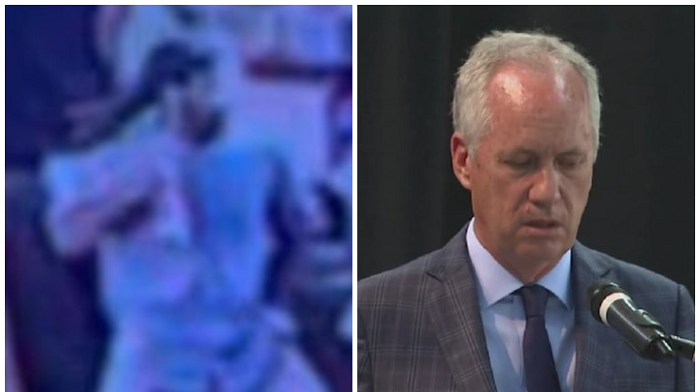 Fischer can be seen in the footage standing along a sidewalk when a man approaches and coldcocks the mayor without warning.

“Earlier this evening, while at Fourth Street Live, Mayor (Greg) Fischer was punched by an individual,” the department said in a Facebook post. “The Mayor is doing fine.”

Though it is unclear what Fischer was doing at the time of the brazen assault, Fourth Street was hosting Juneteenth-related events over the weekend.

This surveillance video shows whoever punched Louisville Mayor Greg Fischer in the face over the weekend. Anyone with information is asked to call the anonymous Crime Tip Line at 502-574-LMPD. pic.twitter.com/5RC1alovqP

One man can be seen walking toward the assailant after Louisville Mayor Greg Fischer gets punched, but the suspect was already heading in the direction he came and apparently managed to flee the scene.

He is now the subject of a manhunt as the LMPD seeks help from the public in locating him.

“The Mayor is doing fine,” they announced in a Twitter post which includes grainy images of the attacker.

Earlier this evening, while at Fourth Street Live, Mayor Fischer was punched by an individual. The Mayor is doing fine. LMPD is investigating & will release further information as it becomes available. Anyone with information can call our anonymous tip line at 502-574-5673. pic.twitter.com/BeKnjfJOgv

Fischer has been the mayor of Louisville for over a decade, having assumed office in January of 2011. Due to term limits, he is unable to run again.

During that time, violent crime in Louisville has been on the rise, with RealClear Policy declaring it “ground zero for America’s homicide crisis” in 2021.

Fischer has rejected calls to ‘defund the police’ in Louisville but has proposed a “reimagining public safety” platform which included a pilot program to “deflect” 911 calls to a non-police response “focused on problem-solving, de-escalation, and referral to appropriate community services.”

It’d be interesting to know how the 911 calls went when those around the mayor were trying to get a police response to Greg Fischer getting punched.

On December 1, 2020, Fischer declared racism a public health crisis in Louisville. Oddly enough, the police department tweets show images of the suspect but don’t bother to mention his race.

Earlier this year, Louisville was the location of another terrifying crime when Black lives Matter (BLM) activist Quintez Brown was arrested for the attempted assassination of Democrat mayoral candidate Craig Greenberg.

Brown was charged with attempted murder and four counts of wanton endangerment after he walked into Greenberg’s office and began shooting at him.

Nobody was injured in the incident, though a bullet reportedly grazed Greenberg’s shirt.

Breaking: The suspect arrested over the attempted assassination of Louisville mayoral candidate @RunWithCraig has been identified as Quintez Brown (@tez4liberation), a #BLM activist & black nationalist championed by Obama & @JoyAnnReid. He was also a writer for @courierjournal. pic.twitter.com/PKwuIAwg4x

The Louisville chapter of BLM posted a $100,000 bond for Brown’s release.

The $100,000 cashiers check has been officially given to the clerks office to pay for @BLMLouisville activist Quintez Brown’s release. @LouCommBailFund is paying. Brown is accused of shooting at Louisville mayoral candidate @RunWithCraig. pic.twitter.com/5BMdW2hpfm

Brown has been jailed until his trial which has not been scheduled as of yet.