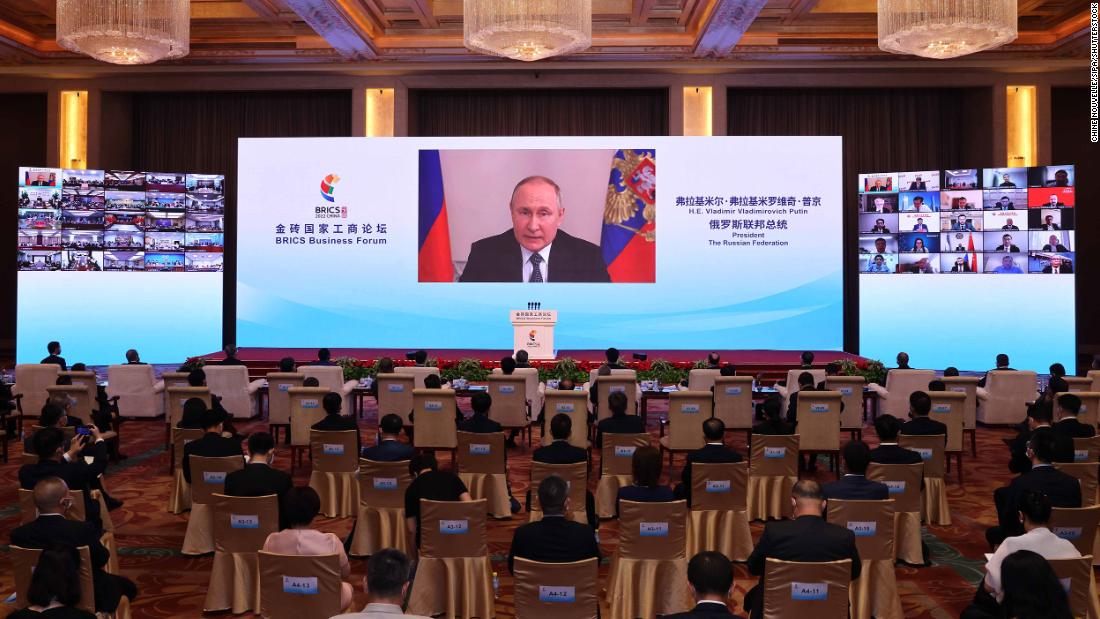 Putin says Russia is rerouting trade to China and India

“We are actively engaged in reorienting our trade flows and foreign economic contacts towards reliable international partners, primarily the BRICS countries,” Putin said in his opening video address to the participants of the virtual BRICS Summit.

The “BRICS” acronym refers to an informal grouping of the five developing economies.

According to Putin, trade between Russia and the BRICS countries increased by 38% and reached $45 billion in the first three months of the year.

“Contacts between Russian business circles and the business community of the BRICS countries have intensified,” Putin said. “For example, negotiations are underway to open Indian chain stores in Russia [and to] increase the share of Chinese cars, equipment and hardware on our market.”

Russia is also ramping up oil exports to China and India, which have been snapping up barrels at a hefty discount. China’s crude imports from Russia soared to a record level in May, ousting Saudi Arabia as the country’s top supplier.

Putin added that Russia’s system for messaging between financial institutions is open to connecting banks from the five countries, and that Moscow is finding new ways to transact without relying on currencies such as the dollar or the euro.

“Together with BRICS partners, we are developing reliable alternative mechanisms for international settlements,” Putin said.

In his address, Putin accused the West of neglecting “the basic principles of [the] market economy” such as free trade.

“It undermines business interests on a global scale, negatively affecting the wellbeing of people, in effect, of all countries,” he said.

The BRICS summit, which is hosted by Beijing, is Putin’s first international forum with the heads of other major economies since he ordered the invasion in Ukraine in late February.

Sanctions from the West have cut Russia off from large swaths of the global economy and pushed the country into a deep recession. But Moscow continues to earn money off exports, especially as energy prices rise. The International Energy Agency estimates that Russian oil export revenues rose to about $20 billion in May.