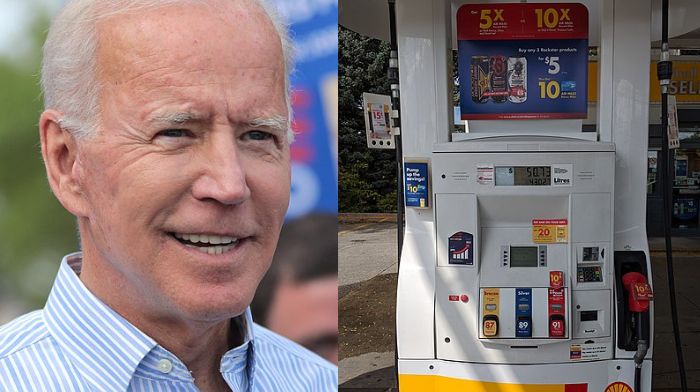 By Casey Harper (The Center Square)

President Joe Biden called on states and Congress Wednesday to implement a temporary federal gas tax holiday as the national average price per gallon hovers around $5 per gallon. Critics say the administration needs to ease regulations on oil and gas drilling in the U.S.

Biden called on lawmakers in Washington, D.C. to suspend the federal gas tax, currently 18.4 cents per gallon, for 90 days “through the busy summer season.”

“It’s important because we use it for the Highway Trust Fund to keep our highways going, but what I’m proposing is suspending the federal gas tax without affecting the Highway Trust Fund, and here’s how we do that,” Biden said. “With revenues up this year and deficits down over $1.6 trillion this year alone, we’ll still be able to fix our highways and bring down prices of gas.”

RELATED: Treasury Secretary Janet Yellen: Biden Not Responsible For High Gas Prices, Only Way to Fix It Is a Shift to Renewables To Address Climate Change

Biden’s deficit reduction comes because of a dropoff from COVID-era spending bills passed when he took office, which helped fuel the current inflation crisis, with the cost of just about everything increasing by 40-year highs.

“Americans need relief from historic gas prices, but President Biden’s latest gimmick won’t provide it,” Tubb said. “Gas is almost $3 more expensive per gallon today than when Joe Biden took office, and his latest ‘solution’ is a temporary measure to lower prices 18 cents. While taxes fundamentally increase the cost of all goods, Americans who are struggling intuitively see this move for the unserious response that it is.”

Tubb said the Biden administration’s policies on the oil and gas industry are only going to continue driving prices upward.

“The federal gas tax accounts for less than 4% of prices at the pump, and those prices are only going up,” she said. “This temporary reduction will be even more laughable in the coming months, as new Heritage research shows that Biden’s energy policies would increase gasoline prices by more than $2 a gallon every year between 2024 and 2040.”

Biden on Wednesday also called on states to suspend their state gas taxes, which are on average 30 cents per gallon. Some states have already suspended their taxes.

Earlier this month, the national average price for a gallon of regular gas surpassed $5 before dipping just below that mark. It is currently at $4.96 per gallon as diesel gas, which also hit record highs this month, sits at $5.81. The federal tax on diesel is 24 cents per gallon.

“…We can bring down the price of gas and give families just a little bit of relief,” Biden said.

Biden’s critics have consistently pointed to his energy policies, particularly his work to hold back drilling and pipeline development.

Biden responded to those criticisms in his speech Wednesday and pointed to Russia’s invasion of Ukraine, which disrupted global oil markets. He also called for more refining of U.S. oil, which slowed during the pandemic, and blamed gas stations for not lowering prices fast enough even as oil prices have dropped recently.

“I fully understand that a gas tax holiday alone is not going to fix the problem, but it will provide families some immediate relief, just a little bit of breathing room as we continue working to bring down prices for the long haul,” Biden said.

Biden also took fire earlier this year for calling the higher gas prices part of a “transition,” accelerating fears that this is the new normal and part of Biden’s green agenda.

This isn’t the president’s first attempt to use federal action to lower gas prices. In March, Biden announced the release of 180 million barrels of oil over six months from the Strategic Petroleum Reserve, a tactic he used earlier in his administration as well.

Biden’s critics called both that decision and the gas tax moves “gimmicks.”

“Just like when he started depleting our strategic petroleum reserve, a gas tax delay won’t work to lower prices and it will leave America more vulnerable,” U.S. Rep. Cathy McMorris Rodgers, R-Wash., said. “It’s time to face reality, stop offering gimmicks, and stop blaming Putin. This is President Biden’s price hike since day one of his administration. President Biden needs to flip the switch on American energy and support bills like the American Energy Independence from Russia Act.

“We need to take action to unleash American energy by boosting natural gas production, restarting oil and gas leasing on federal lands and waters, and protecting future energy and mineral development from attacks by the Biden administration,” she added.