BREAKING NEWS
GMT+2 12:45
Home World The amount of Greenland ice that melted last weekend could cover West Virginia in a foot of water 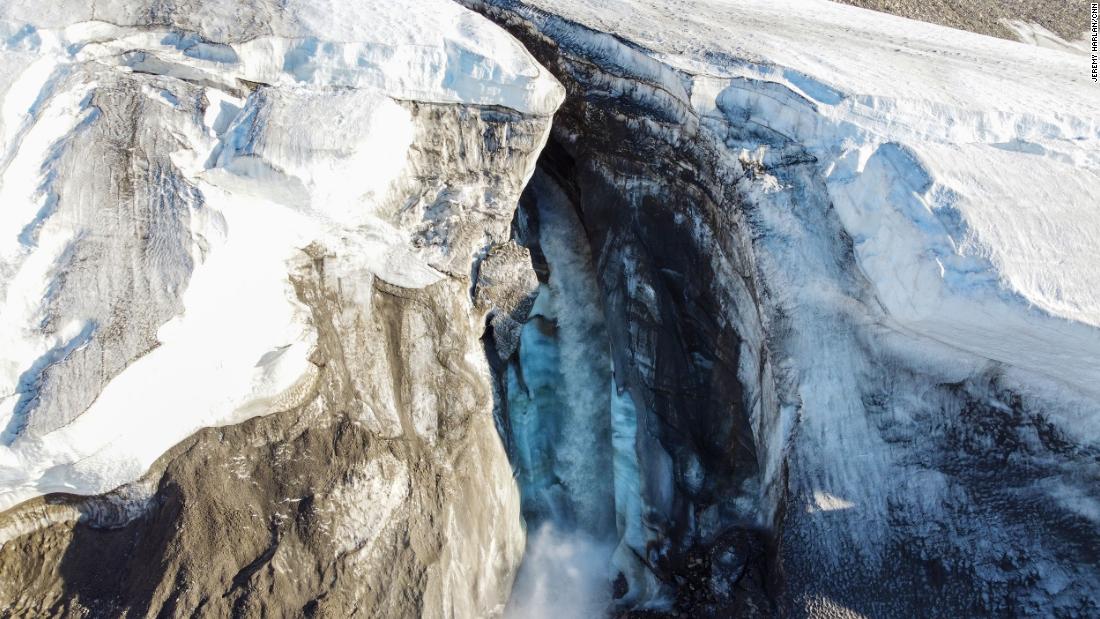 Pituffik, Greenland (CNN)The water off the coast of northwest Greenland is a glass-like calm, but the puddles accumulating on the region’s icebergs are a sign that a transformation is underway higher on the ice sheet.

Several days of unusually warm weather in northern Greenland have triggered rapid melting, made visible by the rivers of meltwater rushing into the ocean. Temperatures have been running around 60 degrees Fahrenheit — 10 degrees warmer than normal for this time of year, scientists told CNN.

The amount of ice that melted in Greenland between July 15 and 17 alone — 6 billion tons of water per day — would be enough to fill 7.2 million Olympic-sized swimming pools, according to data from the US National Snow and Ice Data Center.

Put another way, it was enough to cover the entire state of West Virginia with a foot of water.

“The northern melt this past week is not normal, looking at 30 to 40 years of climate averages,” said Ted Scambos, a senior research scientist at the National Snow and Ice Data Center at the University of Colorado. “But melting has been on the increase, and this event was a spike in melt.”

For the scientists out on the ice sheet, the warmth has been alarming.

“It definitely worries me,” said Kutalmis Saylam, a research scientist with the University of Texas who is currently stationed in Greenland. “Yesterday we could wander around in our t-shirts — that was not really expected.”

Each summer, scientists worry that they will see a repeat of the record melting that occurred in 2019, when 532 billion tons of ice flowed out into the sea. An unexpectedly hot spring and a July heat wave that year caused almost the entire ice sheet’s surface to melt. Global sea level rose permanently by 1.5 millimeters as a result.

Greenland holds enough ice — if it all melted — to lift sea level by 7.5 meters around the world.

The latest research points to a more and more precarious situation on the Northern Hemisphere’s most icy island.

“Unprecedented” rates of melting have been observed at the bottom of the Greenland ice sheet, a study published in February found, caused by huge quantities of meltwater trickling down from the surface. This water is particularly concerning because it can destabilize the sheet above it and could lead to a massive, rapid loss of ice.

And in 2020, scientists found that Greenland’s ice sheet had melted beyond the point of no return. No efforts to stave off global warming can stop it from eventually disintegrating, said researchers at The Ohio State University. The rate of melting in recent years exceeds anything Greenland has experienced in the last 12,000, another study found — and enough to cause measurable change in the gravitational field over Greenland.

Aslak Grinsted, a climate scientist at the University of Copenhagen’s Niels Bohr Institute, told CNN that they have been trying to get flights into the camp so they can ship out the ice cores they have recently collected. But the warmth is destabilizing the landing site.

“The temperatures we are seeing right now are simply too hot for the ski-equipped planes to land,” Grinsted said. “So we store the ice cores in large artificial caves we have made into the snow to protect it from the heat of the summer.”

Scientists take advantage of the abnormal warmth while they wait, playing volleyball in their shorts on an ice sheet at the top of the world.

Grinsted referred the temperatures at the EastGRIP research site as a “heat wave,” and noted that global warming is pushing the mercury higher more often.

“Yes, the chance of temperatures getting this hot is clearly linked to global warming,” Grinsted said.