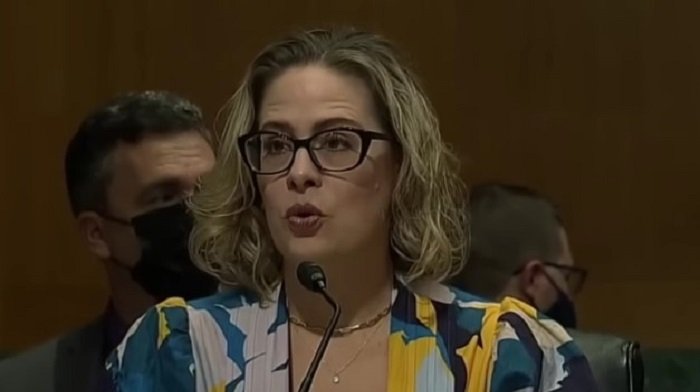 And, much like her West Virginia colleague, Sinema caved after being offered concessions, including a roughly $5 billion drought resiliency fund for Arizona, along with removing a provision narrowing the so-called carried interest loophole that allows wealthy hedge fund executives to pay lower taxes.

“We have agreed to remove the carried interest tax provision, protect advanced manufacturing, and boost our clean energy economy in the Senate’s budget reconciliation legislation,” she said in a statement. “Subject to the Parliamentarian’s review, I’ll move forward.”

Schumer and Sinema announce deal to move the “Inflation Reduction Act” — which won’t reduce inflation but will raise taxes — forward to a vote pending the Parliamentarian’s review. pic.twitter.com/sCjzE9r0TJ

Sinema Caves Under Pressure, Will Move Forward With Democrats Tax and Spending Bill

Manchin, according to the New York Times, was sold on the bill after months of negotiations due to a pledge by Democrat leaders and the White House to complete a highly contested 304-mile gas pipeline in West Virginia.

The duo of Sinema and Manchin caving so easily under the pressure and only fighting for their own pet projects rather than for the financially starving American people – in general and including those in their respective states – underscores the dangers in Republicans heralding them as some sort of savior of the economy.

“I am pleased to report that we have reached an agreement on the Inflation Reduction Act that I believe will receive the support of the entire Senate Democratic conference.”

Says it “preserves the major components of” deal with Manchin

Just a couple of weeks ago Senator Manchin was hinting that he’d not go along with the ‘Inflation Reduction Act’ because it didn’t address “Americans struggling to afford groceries and gas as inflation soars to 9.1 percent.”

Fast-forward to today and a pipeline gets him to bend over. Add Sinema’s move to lower taxes for hedge funds and then you suddenly see they’re both willing to go along to get along. There are no principled Democrats.

With Sinema and Manchin both on board with the tax and spending bill, the expected vote count in the Senate is 50-50 as Democrats openly plan to pass the bill without a single Republican vote, using reconciliation to avoid the filibuster.

Meaning Vice President Kamala Harris will presumably be the tie-breaking vote as she ushers in a win for the Biden administration and a loss for the American people.

Republicans should run this exact video in states with Senate races.

40-year high inflation, high gas prices and an economic recession and Democrats are about to raise taxes to pay for “the biggest climate bill in American history.” https://t.co/asKOwCIG4R

RELATED: Senator Joe Manchin Swears ‘Inflation Reduction Act’ Won’t Raise Taxes On Americans Despite All The Signs It Will

Not Really an Inflation Reduction Act

The entire concept of the Democrat tax and spending bill Sinema is signing up for is predicated on a lie in the title alone. In fact, every time they utter that phrase it is a lie.

The Penn Wharton Budget Model reports that “the Act would very slightly increase inflation until 2024” adding that “the impact on inflation is statistically indistinguishable from zero.”

The Tax Foundation points out that “this bill may actually worsen inflation,” while the Congressional Budget Office (CBO) believes the bill “would have a negligible effect on inflation.”

And West Virginia would suffer the most.

A letter recently penned by 230 economists warns that the Sinema-Manchin-Schumer tax and spending Act will worsen inflation at a time when skyrocketing costs are already crippling Americans.

Fox Business reports that the group of experts explains that the American economy is at a “dangerous crossroads” and the “inaptly named ‘Inflation Reduction Act of 2022’ would do nothing of the sort.”

“Instead,” they write, it “would perpetuate the same fiscal policy errors that have helped precipitate the current troubling economic climate.”

The nonpartisan Joint Committee on Taxation (JCT) estimates that the bill will increase taxes on millions of Americans, including a vast majority of which make less than $400,000 per year.