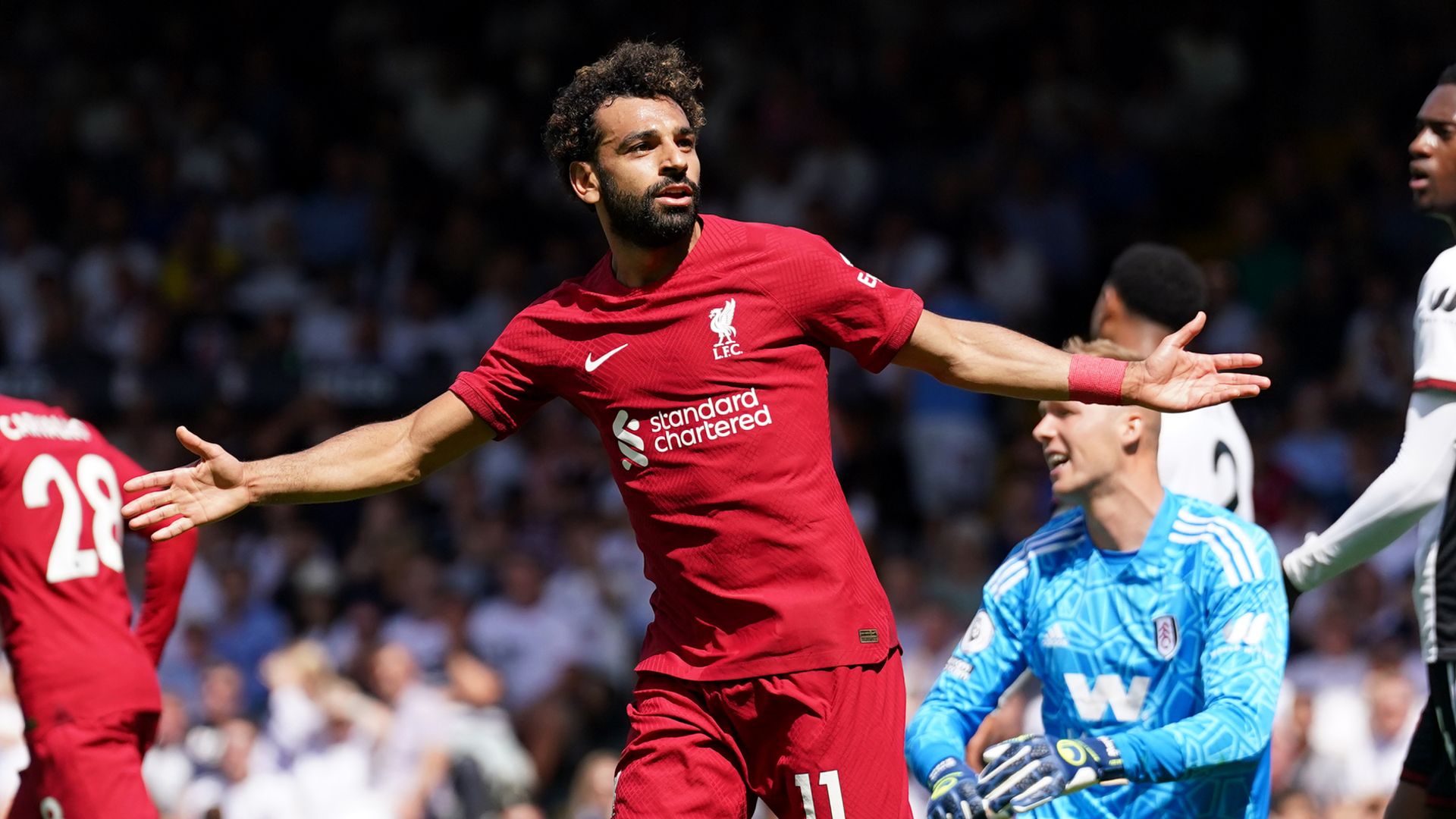 Fulham came close to producing one of the biggest shocks on the opening weekend of any Premier League season as Aleksandar Mitrovic marked his return to the top flight with two goals in a 2-2 draw with Liverpool at Craven Cottage.

Mohamed Salah levelled for the visitors with 10 minutes remaining to deny Marco Silva’s side a famous victory after a performance full of endeavour that celebrated Fulham being back in the top division.

Much has been made of whether Mitrovic can cut it at this level, having scored just three goals in his last Premier League campaign two seasons ago, but he bullied Trent Alexander-Arnold for his headed opener (32) before striking a precise penalty after being fouled inside the box by Virgil van Dijk (72).

Darwin Nunez came off the bench to open his account (64) and cancel out Mitrovic’s first effort from Salah’s cross while Jordan Henderson might have won it for Liverpool in second half stoppage time when his curled effort cannoned off the crossbar.

Jurgen Klopp told BT Sport: “The best thing about the game was the result. We got a point from a really bad game. The result was fine, I don’t think we deserved more than that. The performance can be massively improved.

“We could have won the game because we had good chances but it was probably a bit too much today.”

Man of the match: Aleksandar Mitrovic.

How Fulham made their point on PL return

Fulham chairman Shahid Khan stressed in his programme notes that the club had the idea of “complementing, not compromising, the chemistry and environment” that Silva has established since last summer.

The Portuguese feared his squad was not ready for this ultimate curtain-raiser, citing only 16 senior players following last weekend’s 1-1 draw with Villarreal, but it appeared he was bluffing judging by the start his side made.

Mitrovic, who scored a record 43 goals in the Championship last season, had a sight of goal inside the opening minute after good high pressing from Bobby Decordova-Reid on Trent Alexander-Arnold, but the Serbian striker poked his shot wide.

New Liverpool signing Darwin Nunez had to make do with a place on the bench for the game at Fulham. The striker missed out as Reds boss Jurgen Klopp picked Mohamed Salah, Roberto Firmino and Luis Diaz up front.

It sparked a bright opening from the hosts, with debutants Andreas Pereira and Joao Palhinha looking classy operators in midfield, but Liverpool would slowly assert themselves as Luis Diaz correctly had a goal ruled out for an offside against Andrew Robertson in the build-up on 15 minutes.

Unperturbed by the warning sign, Harrison Reed raced onto an Antonee Robinson cross to slam a shot into the body of Andrew Robertson but it would be a more familiar goalscorer who would have Liverpool on the canvas.

Having struggled to find a rhythm and create chances against a newly-promoted side giving it their all in their first game back in the top flight, the Cottagers took the lead in the 32nd minute. Kenny Tete sent in a deep cross to the far post where Mitrovic beat Alexander-Arnold to head past Alisson.

Diaz was comfortably the best performer in a Liverpool shirt before the interval, and the Colombian came within inches of an instant response when he ran onto Thiago’s pass to crash a left-foot shot against the post, but Fulham deservedly led at the break.

Klopp waited six minutes of the second half before introducing Nunez, and Liverpool’s new £85m club-record signing got to work immediately. Fulham might have doubled their lead when Neeskens Kebano’s diagonal shot struck the inside of the post, and they were ruing that miss as Nunez levelled.

The Uruguayan had already been denied from point-blank range by Marek Rodak when he beat the offside trap to produce a sublime improvised finish from Salah’s low cross. Moments later, Tim Ream was hacking the ball off the line to deny him a quickfire second. At that point, you sensed there would only be one winner, but Fulham showed their resilience to nudge back in front.

There appeared to be very little on for the isolated Mitrovic, but having got his head down and dribbled inside the Liverpool box, a stray outstretched leg from Van Dijk left referee Andrew Madley in no doubt pointing to the spot.

It meant Liverpool had ended a run of 51 Premier League matches without conceding a penalty, the longest ongoing sequence in the competition.

Alisson didn’t come close to keeping out the striker’s confident penalty as Klopp turned to Fabio Carvalho in need of further inspiration. But it was Salah who would provide the response, in typical fashion.

While there was seemingly little danger from Alexander-Arnold’s hopeful centre towards Nunez, a mix-up between Ream and Tosin allowed the substitute to set up Salah for his customary strike on the opening weekend of a Premier League season – his sixth in a row, a new record.

It would set up a thrilling finale, and Henderson nearly penned the last word when he curled a first-time shot against the crossbar – but it would have been harsh on Fulham, who were excellent value for this point.

Silva: Mitrovic is not just goals

Fulham boss Marco Silva told BT Sport: “We have to respect Liverpool but of course do our job and trust ourselves, we did a great first half, almost perfect the way we controlled and blocked. Second half we matched them every time.

“I know the quality Mitrovic has and I’m here to take the best from my players, Mitrovic is not just goals, he puts on the constant pressure and the overall job he did is fantastic.”

“It gives a big boost of confidence. Mitrovic is an animal and as long as he’s banging goals in, we’re good.”

Later in the press conference, Silva was asked if the draw felt like a win: “No, it felt like a draw. And if you ask me if we deserve something more, then yes we do. Liverpool had more control of the game but I think that our organisation and our great first-half meant we deserved this. We have great individual quality.

“In terms of our first half, it was almost perfect. We played sometimes in the first half with 30 or 40 metres behind us. We matched them, and you know that. Without the ball, they’re really aggressive, and we matched them from the first minute to the last.”

Liverpool boss Jurgen Klopp: “We started in exactly the opposite way that we wanted. We had to break lines but we played into their hands. We didn’t find a way into the game and then we were overplaying.

“We are used to more dominance but we couldn’t get that as we weren’t quick or precise enough. The best thing about this game is the result so I’m fine with the point.

“I’m happy for the punishment we got. We could’ve lost three points but in the end, we lost two.

“The performance was a defeat, the result wasn’t. We have to learn from what happened today, but I don’t want to take anything away from Fulham. They did really well. The truth is we played a really bad game and got a point.

“It’s my responsibility to find out why we played a really good game against City and then we play seven days later a game which is completely upside down. It’s up to me to find out why.”

On Thiago’s injury: “It’s clear we said we don’t need a midfielder as we have enough. Now we have been punished for something which is not our responsibility. There’s nothing we could do about this. Naby [Keita] is ill and maybe he’ll be back next week. With Thiago, it’s not good but we will see. A transfer must make sense, now and in the long-term.

“We still have eight midfielders, just some of them are injured at the moment. It’s not a good decision at all, but we won’t panic.”

Man of the match: Aleksandar Mitrovic

Since the start of last season, Fulham’s Aleksandar Mitrovic has scored 45 goals in English league football, 16 more than any other player.

Mitrovic is the first player to score two goals for a newly-promoted side on the opening day of a Premier League season since Steve Mounie for Huddersfield against Crystal Palace in August 2017.

“For me, it’s not important what people say about him. What’s important is that I am working with all the players. People have been expressing what they like [about his record].

“We need to keep providing for him the chances in the box. Mitro is not just a goalscorer for us. What he did without the ball was unbelievable, the way he pressed and came back to help out as well. He ran 30 or 40 metres to win the penalty for us. I’m really pleased for him because he deserved it.”

A frustrating afternoon for Liverpool but they will be encouraged by what they saw from Nunez. In 39 minutes on the pitch, he grabbed one goal, one assist, and had four shots – twice as many as any other Liverpool player – including three on target.

He also ranked top for touches in the opposition box (seven) and aerial duels won (three). Plenty to like about his performance.

On Darwin’s performance, Klopp said: “He scored a great goal, and he could’ve scored another one, maybe two. It was crazy. But it’s good and he gives us an extra dimension. Our delivery was most of the time not good enough but we created a lot of chances.”

The first Monday Night Football of the season sees Liverpool host Crystal Palace on August 15. Coverage starts at 7pm ahead of an 8pm kick-off, live on Sky Sports.